Trump’s State of the Union, The Sourpuss Party, And Drool Boy 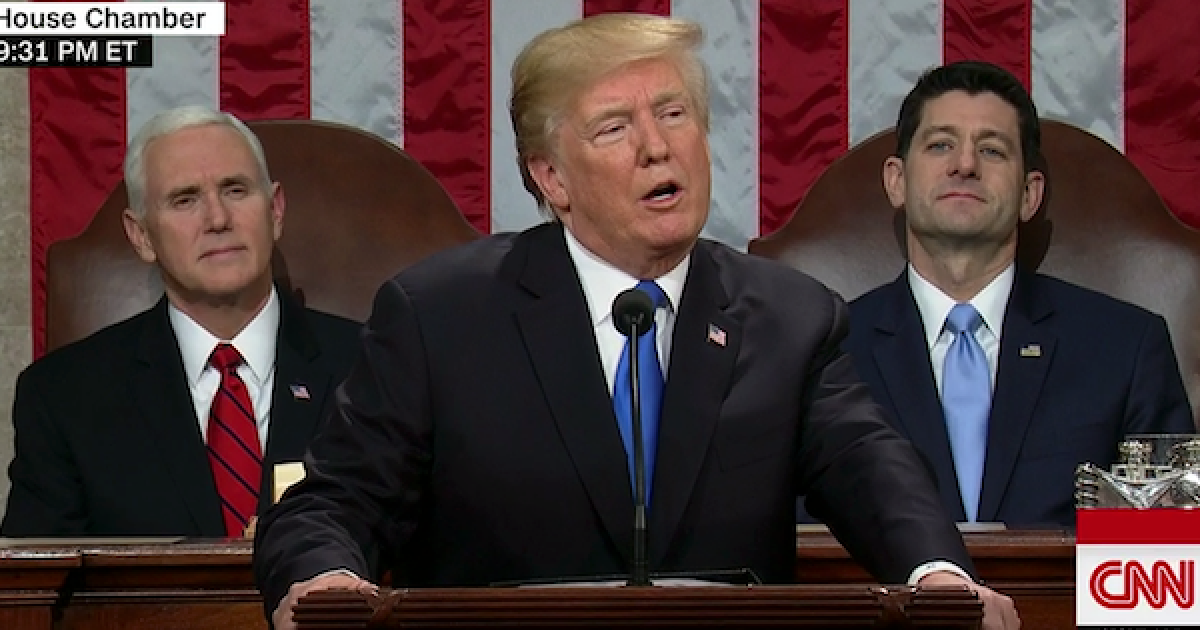 President Trump’s first State of the Union Address (SOTU) was a masterful blend of conservative values, patriotism, and emotion, told in a unique way. To summarize the content the speech was about God, loving America, the American dream,  lower taxes,  the economy, a strong military, and American exceptionalism. The address was optimistic in tone, talked about the need for compromise, and celebrated the achievements of the American people. Note: the text of the speech can be found here and a video of the speech is embedded below.

Trump’s SOTU will be remembered as a celebration of America and Americans. After years of hearing our country was in decline, this president assured us that the future of the country would be great, “This is our new American moment.  There has never been a better time to start living the American Dream,” and “the most difficult challenges bring out the best in America.”

He reminded Congress that “America First” should be the mantra of each and every one of them. And that America first wasn’t an empty mantra but the basis of every policy:

My duty, and the sacred duty of every elected official in this chamber, is to defend Americans — to protect their safety, their families, their communities, and their right to the American Dream.  Because Americans are dreamers too.

Yes, it is okay for America to be exceptional again:

It was that same yearning for freedom that nearly 250 years ago gave birth to a special place called America.  It was a small cluster of colonies caught between a great ocean and a vast wilderness.  But it was home to an incredible people with a revolutionary idea:  that they could rule themselves.  That they could chart their own destiny.  And that, together, they could light up the world. That is what our country has always been about.  That is what Americans have always stood for, always strived for, and always done.

On the other hand, it was embarrassing how the opposition party led by “Frau Farbissina” Nancy Pelosi, acted like a bunch of sourpusses spending the entire speech looking as if they lost their best friend. Once the speech was over the Democrats raced for the exits acting as if they were trying to escape zombies coming from the other side. The Democratic response by Rep. Joe Kennedy was the “same old, same old”  liberal Democratic speech. A rich kid complaining about people making too much money.

Since Ronald Reagan, presidents have invited guests to the SOTU and acknowledged their presence during the address, this speech was no different. However, Trump seemed to build his speech around these guests, using their emotional stories to set up each segment of the address.

For example Pres. Trump spoke about North Korea he told the story of Mr. Ji Seong-ho:

In 1996, Seong-ho was a starving boy in North Korea.  One day, he tried to steal coal from a railroad car to barter for a few scraps of food.  In the process, he passed out on the train tracks, exhausted from hunger.  He woke up as a train ran over his limbs.  He then endured multiple amputations without anything to dull the pain or the hirt.  His brother and sister gave what little food they had to help him recover and ate dirt themselves — permanently stunting their own growth.  Later, he was tortured by North Korean authorities after returning from a brief visit to China.  His tormentors wanted to know if he had met any Christians.  He had — and he resolved to be free.

Seong-ho traveled thousands of miles on crutches across China and Southeast Asia to freedom.  Most of his family followed.  His father was caught trying to escape, and was tortured to death.

Today he lives in Seoul, where he rescues other defectors, and broadcasts into North Korea what the regime fears the most ‑- the truth.

Today he has a new leg, but Seong-ho, I understand you still keep those crutches as a reminder of how far you have come.  Your great sacrifice is an inspiration to us all.

As the camera moved to Seong-ho he stood up on his own and lifted those crutches for all to see, as if to say “you didn’t break me rocket boy.” He received a standing ovation from the Republicans and the guests. Almost all of Democrats remained seated. 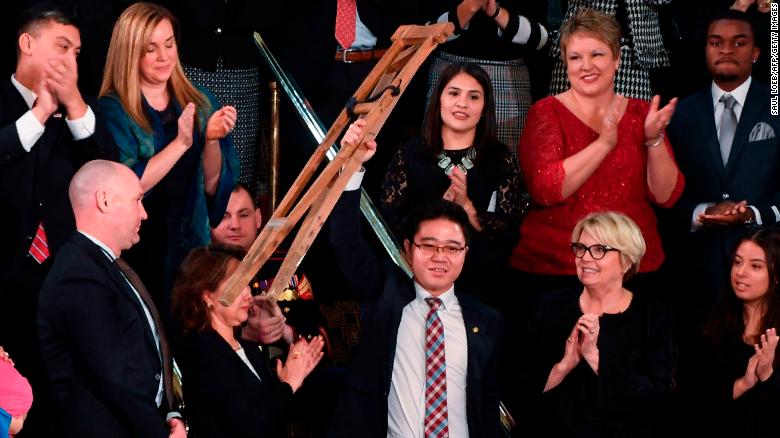 Generally during the State of the Union speech members of the president’s party are a bit too generous with their applause and standing ovations. The opposition party doesn’t stand as often or applaud as effusive but they never sit staring angrily as the Democrats did last night. It was as if they looked at the face of mythological Greek Medusa and turned into stone

Their leader, Nancy Pelosi spent the evening looking as if she had just sucked on a truckload of lemons.

The Democrats even remained silent for easy applause lines uttered by the POTUS such as “in God, we trust,” or when he celebrated all the heroes of the hurricanes or mass shootings. They refused to applaud when Trump spoke of  “Memorials to the heroes of Yorktown and Saratoga — to young Americans who shed their blood on the shores of Normandy and the fields beyond.  And others, who went down in the waters of the Pacific and the skies all over Asia.” Or even when he discussed initiatives Democrats usually support, such as doubling the number of protected dreamers, a pathway to citizenship, or spending on infrastructure.  The Congressional Black Caucus did not clap for the fact that black unemployment is the lowest in history. 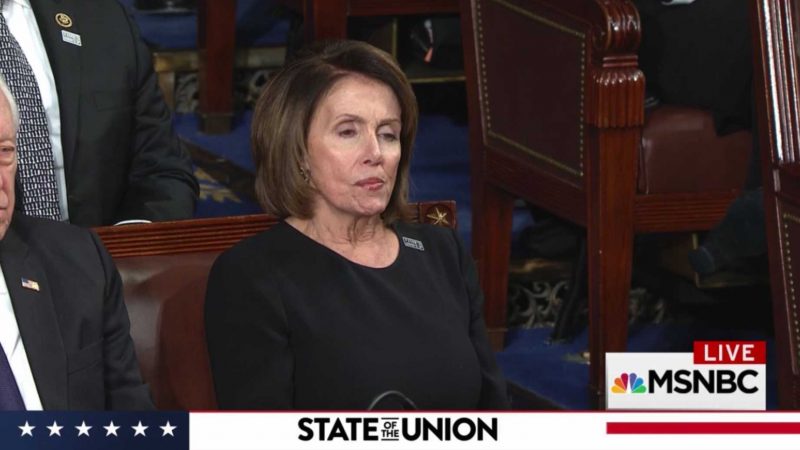 Ironically even when the president spoke of Americans saluting the flag and standing for the national anthem, the Democrats sat while the rest of those who attended stood and applauded.

President Trump’s speech was followed by the Democratic Party response given by Massachusetts Congressman Joseph Kennedy, grandson of the late Bobby Kennedy and the great-nephew of the late President JFK and Senator Ted Kennedy. Kennedy’s speech was marred by what seemed to be liquid coming out from the corners of his mouth earning the nom de plume of “drool boy.” 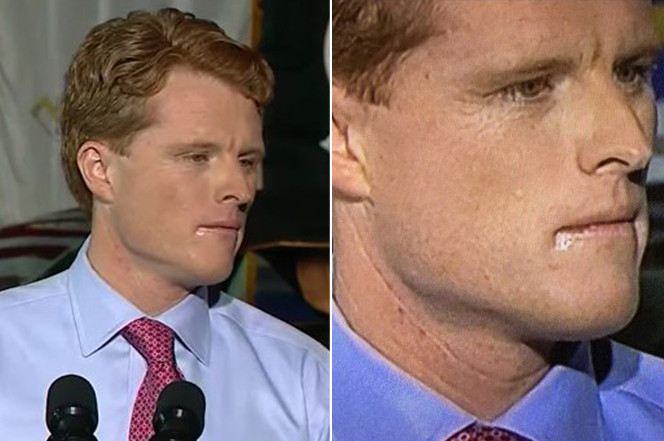 As for content, Joe Kennedy’s speech was pretty much a generic liberal democratic speech. The GOP is mean, the rich make too much money, etc. etc. To be honest his speech could have been given by his great-uncle Teddy all he needed to do is cry out, “Wake up Mary Jo”

Did the president help himself during his State of the Union Address?  Absolutely! His optimistic tone, love of country, and support of all Americans were delivered to the people of this country unfiltered by a mainstream media that tries to present him as some sort of racist ogre.

On the other hand, the Democrats may have hurt themselves with their angry faces. As the saying goes, “Nobody likes a sore loser,” and the Democrats in the room presented themselves as sore losers who were slapping away the hand of a president who reached out and offered to work together.

For more great analysis of the State of the Union go to Hot Air and read Trump SOTU Hardball: “Americans Are Dreamers, Too” by Ed Morrissey.