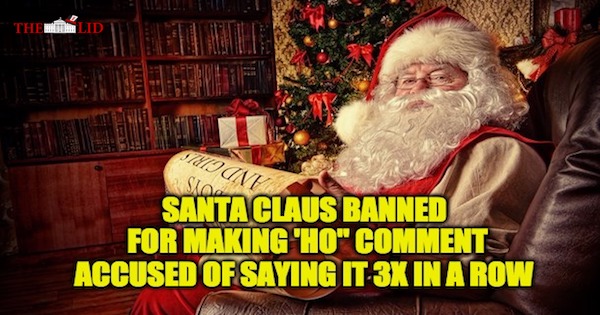 Note: No Santa Claus has not been banned—yet!

2016 seemed to be the year that political correctness (PC) was allowed to accelerate faster than a fire in a jet fuel factory. The craziness grew rampant on college campuses with safe spaces, trigger warnings, protests on conservative speakers only, and so much more… just crazy!

To prove my point, students at Pomona College campuses were greeted with a sign in their dorm rooms stating All White People are Racist. That’s a great first lesson!

In a real mind puzzler, a professor at Southern State Community College in Ohio suggested the NRA corporate office should be “shot up” leaving no NRA people alive. The statement was made to support better gun control. This is a professor, who teaches YOUR children.

A pro-Trump rally at Penn state was interrupted by an ANTI-Trump rally. Did they use louder bullhorns? NO! Did they have more people shouting them down? NO! The anti-Trumpers went over and ripped up the pro-Trumps signs. They got in the faces of the pro-Trump people and called them “Bullies.” Because not committing violence is now bullying? Right?!

Students at Appalachian State University protested their “White Privilege Board” while denouncing their own white, male, able-bodied, Christian, or cisgender privilege. If their privilege is what gives them the ability to be there, how can they protest it unless they leave, renounce their studentship, and leave the college? Just askin’.

A Language Matters campaign at Rutgers University was introduced to students as an anti-microaggression program. Students were advised to check their choice of words to make sure they are “true,” “helpful,” “inspiring,” “necessary,” and “kind” before speaking out. REALLY? Those are measurements for microaggressions? Who decides the meanings? With everything going on at college campuses, is this all they have to do?

Brown University decided to further waste as much tax and donor dollars as humanly possible they would now put a “tampon” dispenser in all men’s rooms! Now you say, well Joe, what about transgenders? OK. The reason, according to a BU spokesman was because “not all who menstruate are women.” Think about that!

There is an annual event at colleges across the country called a “White Privilege Conference.” The conference was attended by over 1500 people at an average cost of $340.00 per student. The fees picked up for many by their college.

Shortly after Milo Yiannopoulos, a conservative, gay, social media expert, spoke to a group of Young Republicans at The University of California in Irvine the administration called in the leaders of the group and suspended the club for a year because of a technical infraction. But they wouldn’t tell them which one infraction. Sounds fair, right?

UMass Amherst students threw a temper tantrum (guess which way they leaned) when, Milo Yiannopoulos was asked to speak at an event on campus. How dare they! So much for free speech.

Students interviewed on campuses across the country by Mark Dice and others were presented with statements made by Trump as if they were made by Hillary (for the interview.) The interviewees were fine with the statements and spoke with such conviction until they were told where they really came from. And then they were so embarrassed!  Go figure!

Tired of Black History month, Gay history month, people who have done nothing worthwhile history month? You now have “Whiteness History Month” at Portland Community College. They give you a whole month of white-bashing by simply teaching students ALL the bad things white people have done over the centuries.

We are already seeing people across the globe push back on PC. And it’s NOT Trump who should get the credit… BREXIT and Mr. Obama should! Yup, when Mr. Obama sent his not-so-covert team to Israel to meddle in their elections they gave him the proverbial middle finger and did the opposite of what he wanted. When he asked the people of Great Britain to vote against the exit, he helped the EXIT wave grow. It was great.

Still no lessons learned. Mr. Obama came out and said to the black community and Democrats, if you don’t get out and vote for Hillary, you’re voting against his policies and legacy. HELLO! Did you get the message? Nope!

Voting in Nancy Pelosi as their leader showed they still didn’t get it. And then Nancy’s soon-to-be very famous line, “Americans didn’t want a change of course, didn’t want us to change anything,” shows her meds were and continue to be the wrong dosage.

They complain about President-elect Trump’s every word and every appointment, saying it’s the wrong thing for America.

Democrats learned nothing from 2016. America, lifelong union Democrats, 8% more of the black community, more of the Asian and Hispanic communities, and more women didn’t want their same-old, same-old ways of doing business.

They’ve missed the lesson or don’t have the mental aptitude to understand it. Either way, America now wins.  BUT only if you engage, get involved, go to you local school boards water boards city councils and be heard!