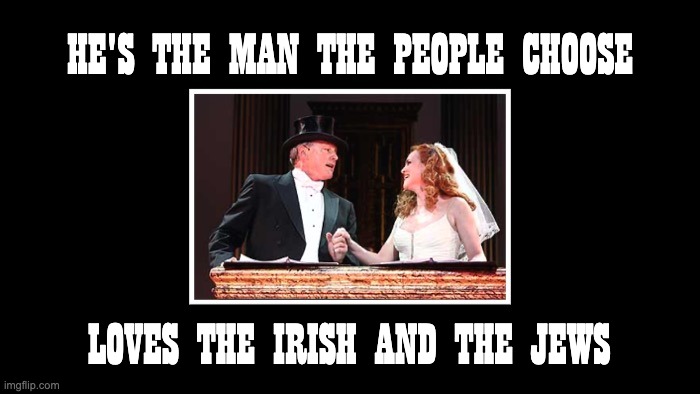 Can a President be impeached because he likes corn muffins? If Adam Schiff, Jerrold Nadler, and Nancy Pelosi are involved, the answer is most probably yes. But this post isn’t about an actual impeachment. It’s about an impeachment that happened in a Broadway play. IMHO it’s the most biting political satire ever written for the stage. And though it opened on Broadway ninety-one years ago, it perfectly describes politics today.

On  December 26th, 1931, the most biting political satire ever written opened at the Music Box Theater on Broadway. Called Of Thee I Sing, it was the first successful American musical with a consistently satiric tone.

What made it work was it captured Americans’ feelings about the politics of the day. What would make it work today is that it captures Americans’ feelings about the politics of now. It includes political issues such as identity politics, a political elite, irrelevant campaign themes, big money politics,  and a Congress that changes its positions every time the wind changes and impeached at the drop of a hat, just to name a few.

Of Thee, I Sing opened on Broadway during the worst time of the great depression (1930 and 1935). 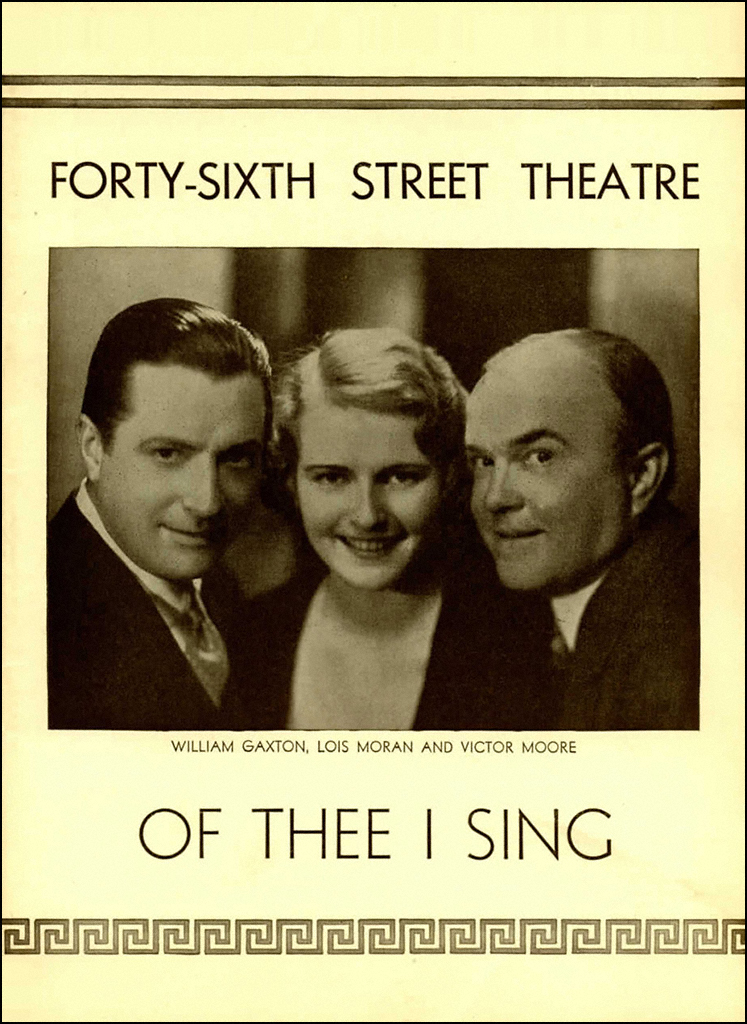 Of Thee, I Sing was so biting and satirical that the writers and cast worried about the public’s reception. That worry prompted one of the play’s writers, George S. Kaufman, to quip the now famous, “Satire is what closes on Saturday night.” But the show didn’t close. In fact, Of Thee, I Sing was the first musical to win the Pulitzer Prize.

The creative team behind the musical was like a Broadway All-Star team. The book was written by George S. Kaufman (You Can’t Take it With You) and Morrie Ryskind. The team’s previous collaboration was Animal Crackers, a Broadway musical written for the Marx Brothers (Ryskind went on to write many of the Marx Brothers’ movies).

George and Ira Gershwin wrote music and lyrics. George Gershwin was arguably America’s most celebrated music composer at the time. He wrote everything from musicals to opera to orchestral music and ballet. His brother, Ira Gershwin, is one of the American musical’s greatest lyricists. Ira wrote for stage and screen (including the original A Star is Born).

The play tells the story of presidential candidate John P. Wintergreen. As his campaign song says,” he’s the man the people choose, loves the Irish and the Jews (music below).”


The candidate for Vice President, the political elite chose Alexander Throttlebottom, a man best known for gaffes (sound familiar) and who, throughout the play, gets thrown out of important meetings, despite the fact he is the Vice President because no one knows who he is. As one of FDR’s VPs, John Nance Garner, said, “the vice presidency is not worth a bucket of warm spit.” The difference between then and now is we have a VP who believes any project she gets from the POTUS is not worth a bucket of warm spit.”

As with most campaigns, the candidate throws a wrench into the plans. In this case, he refuses to marry the contest winner. Right after Miss Deveraux is announced as the winner, John P. Wintergreen stops the pageant because he has finally fallen in love. He was engaged to the all-American Mary Turner. Turner’s primary qualification is… well:

Okay, that part might not please today’s woke culture.

After hearing candidate Wintergreen’s “heartfelt” announcement about falling in love with Mary Turner, an irrelevant closing argument just like. And Americans eat it up. They are so happy they exclaim (and sing), “Love is Sweeping The Country. Of course, Wintergreen and his Mary win the election.

The inauguration and wedding ceremonies are combined. The President sings the title song declaring his love for the new bride (it is a musical, after all).

The Chief Justice presides over the wedding ceremony, and just after he has pronounced John and Mary man and wife, contest winner Diana Devereaux interrupts the proceedings (there’s always a whistleblower). She is serving Wintergreen with a summons for breach of promise. Devereaux insists she is the one he should have married.

The entire Court is called in to decide between corn muffins and justice. They march onto the stage singing:

The Supreme Court rules that Mary’s corn muffins are more important than justice.

The Supreme Court is called in to decide between corn muffins and justice. They march onto the stage singing:

Since John Roberts was not Chief Justice back, this Court’s leader wasn’t hiding under his desk. The Court decided that corn muffins are more important than justice.

France was unhappy, so the political operatives decided to have the President impeached to placate the French. Yes, it’s a stupid reason for impeaching the President. The Senators begin their impeachment roll call (in song, of course). But first, they show their joy in being able to raise taxes. Mmm, where have I heard about raising taxes before?

The Senate roll call for impeachment is not going well for Wintergreen. At least at the beginning of the vote, it looks like he is about to be tossed out of office. As the Senate vote gets really gloomy, First Lady Mary Turner bursts in. She announces that she’s expecting.

Since no expected President has ever been impeached, the vote is called off. But France still isn’t sated. The French ambassador is about to declare war on America when Wintergreen has a brilliant idea. When the President of the United States is unable to fulfill his duties, his obligations are assumed by the Vice President! The ambassador calls Wintergreen a genius, and Throttlebottom is ecstatic as they pass Diana over to him. Servants wheel a large bed into the room, where Mary sits with the babies. Wintergreen leads everyone in proclaiming, “Of Thee, I Sing.”

Of Thee, I Sing is an exceptional play because it connected with the mood of America during the peak of the depression. That mood is similar to today. A feeling that a political elite is trying to run the country, that Congress is tied up in their own underwear over political things rather than getting anything done for the people, and a president can be impeached for something silly like corn muffins. There are more examples of how the play relates to today’s politics, but this post is already long.

Over and above the great music, comedy, and biting satire, the play has a sense of optimism, a feeling that however bad things get, things eventually will turn out fine. That optimism is uniquely American.

Of Thee I Sing was revived a few times. A planned movie version starring the Marx Brothers never came together (thank God), and there was even a dreadful TV version starring Carroll O’Connor (it was the musical comedy equivalent of the Star Wars Christmas Special). Still, the play was never revived at the right time–like now.

Of Thee I Sing is merciless in attacking all American political institutions. The nine members of the Supreme Court care more about politics than justice (just like the Roberts Court). The Senators care more about their political party than doing their jobs (can you say Chuck Schumer?). And the political establishment doesn’t give a rat’s arse about what the country needs or what the people want. They only care about public opinion and maintaining power. Because of that attitude, identity politics is more important than issues. Some things never change.

And what of beautiful southern belle Ms. Deveraux? Vice President Throttlebottom reminds us that when the President cannot fulfill his duty, that obligation is taken over by the Vice President. So Throttlebottom gets Deveraux. This is the only part of the play that could not happen today. Kamala Harris is too busy trying to fix the border crisis.

In the end, everyone is happy. The President has his Mary (and corn muffins). After all, as the song says, “Posterity is Just Around The Corner.”