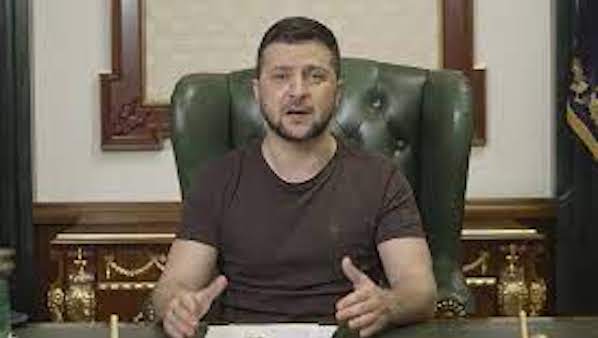 Volodymyr Zelenskyy has undeniably been heroic since Russia’s unprovoked invasion of Ukraine. In particular, his continuously measured communication has been crucial and deserves praise.

But after detailed reflection and research, I believe the Ukrainian leader erred by comparing the current war against his country to the Holocaust.

Zelenskyy, a Jew himself, believes Israel has a moral obligation to assist his population, in part because Ukrainians aided Jews during the Second World War.

Yet, for what it’s worth, far more Ukrainians participated in Hitler’s barbaric genocide than righteous gentiles who opposed the Nazis. Roughly 1.5 million Jewish deaths — more than one-quarter of all who perished— occurred in what is now Ukraine, including the Babi Yar massacre, where 34,000 Jews were slaughtered in just two days.

Most opprobrium came from the Israel-hating left, but Republican Rep. Adam Kinzinger also surprisingly jumped into the fray.

Thread on Israel: so i grabbed the third rail of foreign policy today, as I said Israel needs to pick a side, and that future aid could be at stake.

I want to double down on this, let me explain.

While he correctly identified the ongoing European battle as a struggle between good and evil, Kinzinger appeared to believe every country should assume the same posture as America, without risking its own security. The Illinoisan’s historically ignorant and unwarranted criticism of Israel being slow in its condemnation of the Russian invasion is overly simplistic.

A quick review of recent history:

Because former President Barack Obama fecklessly gave Syria to Vladimir Putin nearly a decade ago, Israel needs Russia’s acquiescence when it attacks Iran from inside Syria, unless it wants a direct confrontation with Russian warplanes.

The Jewish State’s concerns are even more heightened, due to Biden’s ignominious moves to enter a new, egregious Iran Nuclear Deal.

Are Kinzinger and the Biden administration trying to lead Israel into a full-scale regional war? Israeli leadership’s first priority is Israel’s survival, not the outgoing congressman’s conscience.

As a military veteran, Kinzinger should also remember it surely was not Israel that emboldened Russia.

Team Biden catastrophically and ineptly surrendered in Afghanistan. Europe made itself dependent on Russian energy. Biden shifted America from energy independence to dependence on rogue regimes. Israel did none of this.

They sent medical staff to set up a field hospital; denounced Russia at the United Nations; and are even trying to arrange peace talks between Ukraine and Russia in Jerusalem.

“It’s understandable that Zelenskyy is making use of whatever reference points he think will help his country. It’s also true that Jews like Zelenskyy who grew up behind the Iron Curtain didn’t learn this history in the same way or on the same timeline as Jews living in the rest of the world,” Judaic Studies professor Jeffrey Veidlinger wrote Wednesday for Arutz Sheva. “And I’m sympathetic to the idea, expressed by Israeli leaders to rebuff criticism of Zelenskyy after his speech, that we can all cut some slack to a world leader in a situation of life and death. Still, Zelenskyy’s voice matters. And when he utters untruths about the Holocaust, it’s important not to let them stand.”