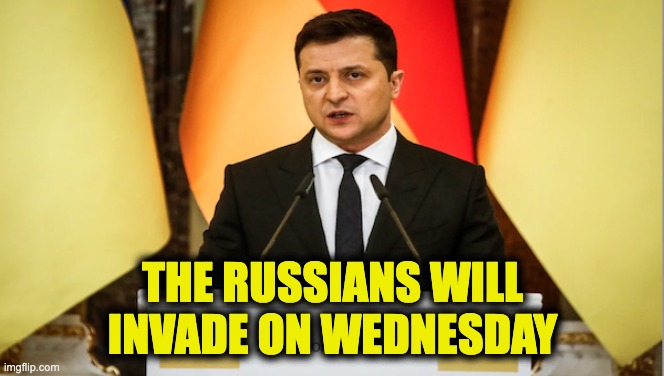 At about 1:30pm on Feb.14, Ukraine, President Zelensky announced on Facebook that he was told the Russians would attack in two days, Feb.16.

Zelensky also called for a National Day of Unity on Wednesday with his belief about when the invasion would happen. He said the relevant decree has already been signed, adding “On this day, we will put up our national flags, wear blue and yellow ribbons and show the whole world our unity,”

Pentagon spokesman John Kirby would not confirm the Wednesday date, but he did say that there was probably still room for negotiation. Secretary of State Blinked announced. The US “is in the process of temporarily relocating our Embassy operations in Ukraine from our Embassy in Kyiv to Lviv due to the dramatic acceleration in the buildup of Russian forces.” Kyiv embassy closing for now. In a way, that’s good news. Knowing Biden and Blinken, it’s a surprise they weren’t moving the embassy to Kabul, Afghanistan.

There are indications that the invasion was near. Zelensky asked Putin for a meeting, but Putin refused, and satellite pictures show that Russian Tanks are moving on the ground toward the Ukraine border… Generally, tanks are kept on trucks until just before an attack because the ground can damage the tracks on which the tanks move,

If the invasion happens, it’s likely to be bloody not only for the Ukrainian military but civilians as well.

Below is the Facebook message in which Ukraine President Zelensky announces the date that Russia will invade:

Great people of a great country! There have been serious external and internal challenges in front of our country, which require responsibility, confidence and concrete actions from me and each of us.

We are intimidated by a great war and once again set the date of the military invasion. This is not the first time. But our state is stronger today than ever.
We strive for peace and want to solve all issues exclusively through negotiations. And Donbass, and Crimea will return to Ukraine. Only in a diplomatic way. We don’t stare at someone else’s, but we won’t give our own. We have an amazing army. Our boys have unique combat experience and modern weapons. This is already times stronger than the army eight years ago. We are confident in our armed forces, and our military too should feel our support, our togetherness and our unity. The basis of our army is the confidence of our own people and a strong economy.
We are told that February 16 will be the day of attack. We will make it a union day. The decree has already been signed. This afternoon we will hang national flags, put on blue-yellow ribbons and show the world our unity.
We have one great European aspiration. We want freedom and are ready to vote for it. 14 thousand defenders and civilians who died in this war are watching us from the sky. And we will not betray their memory.
We all want to live happily, and happiness loves the strong. We have never been able to give up and we are not going to learn that.
Love Ukraine! We are at peace! We are strong! We are together!
Zelensky says Russian invasion starts on Wednesday
https://lidblog.com
Facebook Twitter Flipboard