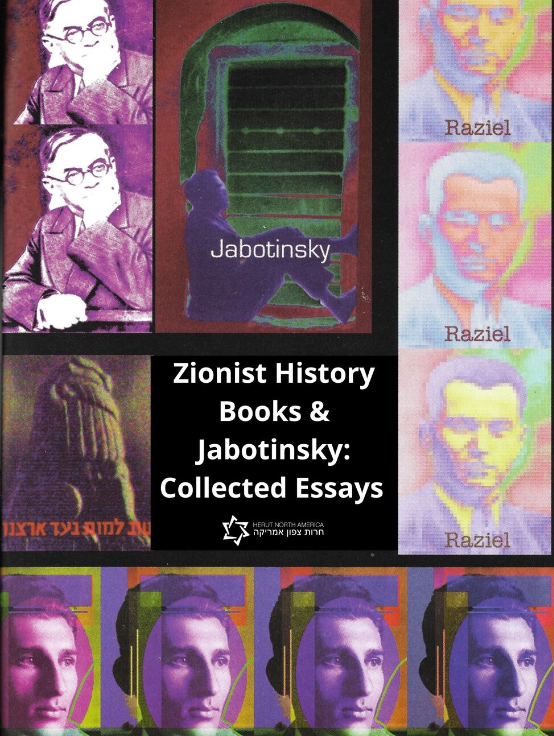 In honor of the 140th anniversary of the birth of the great Zionist leader Ze’ev Jabotinsky, a new eBook of essays about outstanding Zionist history books is being offered for free by Herut North America, the grassroots movement for Zionist pride and education. The collection includes essays about classic, hard-to-find books by Zionist thinkers, Israeli political figures, and journalists and is designed to give these history books the attention they deserve and seldom receive. The eBook also contains an exclusive excerpt from the recent book “Jews Make the Best Demons: “Palestine” and the Jewish Question“ by Eric Rozenman plus other features.

“Zionist education is Herut’s main mission and has been since our inception, and one reason for the publishing of this anthology of book reviews was to allow readers to learn more about how Ze’ev Jabotinsky’s ideas inspired his Zionist movement to take action on behalf of the Jewish People for the last 100 years,” said Moshe Phillips, the National Director of Herut North America.

The eBook is collated from Herut’s ongoing “Zionist History Book Of The Month (TM)” series that is distributed by Herut North America to Jewish newspapers and news websites as well as on social media.

Also included in the eBook is a never-before-published memorial tribute for Jabotinsky’s biographer, Joseph B. Schechtman. The Schechtman feature, by Yisrael Medad, who is the retired Director of Educational Programming and Information Resources at the Menachem Begin Heritage Center in Jerusalem, marks the 50th anniversary of Schechtman’s death.

“Work like the “Zionist History Book Of The Month” campaign is what sets Herut apart from other Jewish organizations — it’s the dedication to Zionist education that is in Herut’s DNA as part of the legacy of Jabotinsky, and we embrace our duty to educate like no other Zionist movement today,” stated Karma Feinstein Cohen, the Executive Director of Herut North America. “This eBook is a natural extension of our “Zionist History Book Of The Month” ongoing project, and we now find that the interest in Zionist history is growing in the U.S for the first time in a long time.”