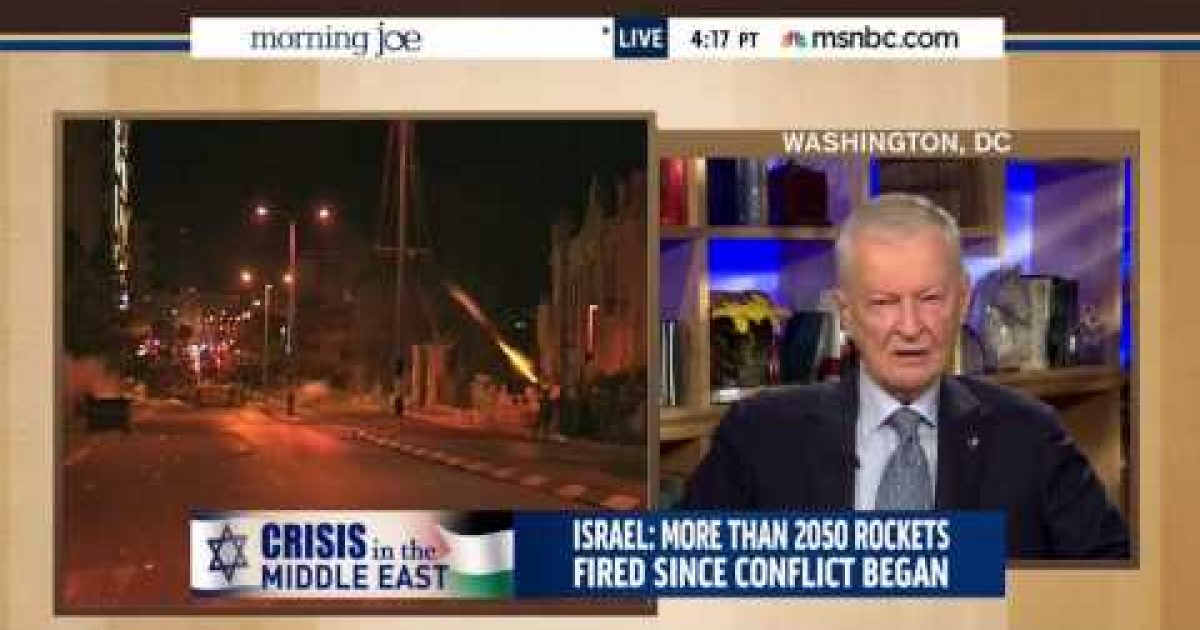 Sometime during his life Israeli Prime Minister Benjamin Netanyahu must have dealt a major affront to Zbigniew Brzezinski, because today on Morning Joe Jimmy Carter’s National Security Director (and host Mika’s father) not only blamed Israel for the present Middle East conflict but also launched into a venomous attack on the Israeli prime minister.

Discussing the present conflict between Israel and Hamas with the Morning Joe panel were former Secretary of State Madeline Albright and Brzezinski. Albright was questioned first being asked about a Netanyahu interview in which the prime minister explained he had to protect his people, using the phrase, “a man’s gotta do what a man’s gotta do.”

Mika Brzezinski turned it over to Mike Barnicle to question her father, who answered with venom:

Brzezinski: I think there are some politicians in Israel who are men enough and women enough to do that. I don’t include Prime Minister Netanyahu in that category. I think Madeleine put it extremely well. The issue is larger than just Gaza. The issue is peace between Israel and the Palestinians. The peace, if there were one, would result in a large measure of the problem in Gaza. The fact is that honest, dedicated efforts to produce that peace by our Secretary of State, by the President of the United States, by previous leaders of the United States previous Secretary of States of the United States like Madeleine, for example, have made that effort. It’s been scuttled by Mr. Netanyahu. That’s the fact of the matter. How can you have peace if at the same time someone is incorporating the territory that is at issue, is building on it, is indicating that most of the territory will be part of Israel and that the Palestinians can be a second-class minority and essentially a militant Israeli state? Most Israelis don’t support that. Most Israelis are in favor of peace. The majority of the American-Jewish community is in favor of peace. But the ideologues, hard-liners, the ones that promulgate confrontation are in charge, and that’s what’s so hard and so disgustingly destructive for both Israelis and the Palestinians.

Ignoring the truth, Brzezinski blames everything on Netanyahu, ignoring the fact that Netanyahu has been Prime Minister for only nine of fifty-four years since Brzezinski began to advise JFK, or that when Madeline Albright was the Secretary of State Israel cut a deal where the Palestinians would receive 98% of what they asked for, but Yassir Arafat walked away from the deal and started the second Intifada. His statement that Israel wants most of the disputed territory to be part of Israel is also false. He also ignores the fact that Israel disengaged from Gaza in August of 2005.

Brzezinski called Netanyahu an ideologue, but if you read Madeline Albright’s answer to the same question (asked by Mark Halperin) it becomes clear that it is Brzezinski who is the ideologue. His views are ruled by his hatred of Israel and his hatred of Benjamin Netanyahu:

Halperin: Secretary Albright, do you trust Prime Minister Netanyahu and the Israeli Government, the Israeli military to have proportionality in this ongoing military operation?

Albright: I don’t think it’s a matter of trust. It’s a matter of the fact that they need to understand that, in fact, they are losing their moral authority. We all, I think, believe in the security of Israel. It’s absolutely essential. They are our friends and allies. But I do think that it is important to accept a cease-fire. The truth is that Prime Minister Netanyahu has, in fact, a couple of times said that he would go forward with a cease-fire. It’s Hamas that is not responding to it. And part of the problem here is that while the relationship between Egypt and Israel has been useful over the years, part of the problem is that President Sisi does not have the same relationship with Hamas. There is the problem with trying to get Hamas to accept a cease-fire.

The sick part of Zbigniew Brzezinski’s appearance is he was unusually well-behaved, usually he will add some anti-Semitic meme such as those rich Jews are controlling Congress.