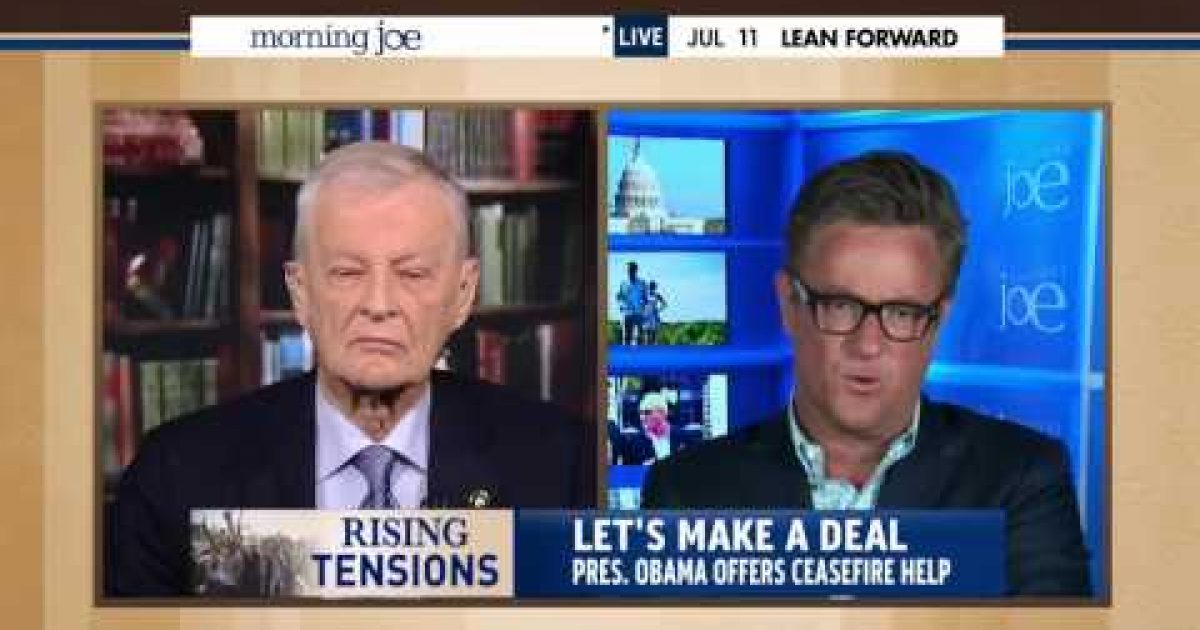 Friday’s Morning Joe program featured a discussion about the ongoing Israel and Hamas conflict. Joe Scarborough spoke with Zbigniew Brzezinkski the National Security Adviser for Jimmy Carter, famous for helping to create the Taliban, inventing anti-Israel conspiracy theories, and spewing anti-Semitic rhetoric.  For viewers who are anti-Israel Brzezinski did not disappoint. He blamed the present conflict on Israeli Prime Minister Netanyahu; a right-winger who is “determined to prompt, to precipitate a direct military collision with Gaza.” Brzezinski also presented Hamas as a terrorist group that has moderated.

It was a tough interview for Scarborough to do as he could only go so-far in confronting  Brzezinski as he is the father if co-host Mika Brzezinski.

From the start the elder Brzezinski asserted the present Israeli government was anti-peace. The transcript below is annotated with the truth.

Scarborough: Dr. Brzezinski, if you had the ear of the Israeli leaders what would you recommend they do regarding Hamas?

Brzezinski: I would recommend that they follow the mood of the Israeli people in Israel and also the majority of the American Jewish community, which is that peace is preferable to the use of force and to the creation of more and more settlements [factually untrue, Israel is not building new “settlements” outside of its capital Jerusalem—it is add new housing units to existing communities], which prevents a territorial promise between the Israelis and the Palestinians [No compromise needed in Gaza—Israel pulled out of Gaza in 2005 the deconstructed all settlements the only think they left were greenhouses which Hamas destroyed….Perhaps Brzezinski missed it—it was in all the papers] . We have had a well-meaning policy for Israel-Palestine. But we have not had a policy, which will take a defined lead with the President personally asserting his leadership personal. On Hamas specifically, the fact that Hamas joined the Fatah coalition in a Palestinian joint effort means they were in effect deferring to the position adopted by the Palestinian moderates, namely that peace with Israel has to involve two states, cohabitation, agreement on borders and so forth [another lie Hamas is still calling for the destruction of Israel and so is Fatah]. The Prime Minister of Israeli who is a right-winger and who defers to the right wing seems determined to prompt, to precipitate a direct military collision with Gaza which would result in a lot of people being killed and probably the Palestinian mood becoming more radicalized [this “collision” with Gaza was promoted by the more than 450 rockets sent into Israel in 2014 before the beginning of Operation Protective Edge].

Scarborough: So what does Israel do though, when missiles are being fired at them? And what do they do when they have an organization like Hamas that, obviously, still calls for the destruction of Israeli to somehow move the Palestinian people further away from an organization that many consider to be a terrorist organization, Hamas?

Brzezinski: Hamas doesn’t recognize the existence of Israel, that’s absolutely true and it’s not tenable in the long run, but Hamas is prepared to join a coalition of Palestinians who do recognize Israeli and are prepared to adopt a compromise solution which results in the emergence of two states. There are elements in Gaza which are extremists and which are doing the firing. Hamas has not had an all-out attack on Israeli except after Israeli has attacked Gaza more indiscriminately [see comment about missiles above]. I have absolutely no objection whatsoever to discriminating Israeli attacks on the extremists and Israelis know pretty well where they are. They even know where they live so they can actually do that quite effectively. But right now, I think Mr. Netanyahu and the dominance of Israeli, not necessarily supported by the military in this regard, are preparing an all-out assault on Gaza which will precipitate hundreds of casualties, hundreds, and perhaps some effort to overthrow the regime which means the radicals have the field left to them [ Brzezinski has no idea what the Israeli military thinks, and his last comment forgets that Hamas is the radicals]

Scarborough: Let me ask you more about Hamas because it’s a fascinating question The “Wall Street Journal” earlier this week, not surprising to people, who don’t like the ” The “Wall Street Journal” editorial board, suggested that Israeli destroy Hamas, go to war with Hamas and destroy them. My position has always been, as pro-Israeli as I am; you have to deal with Hamas one way or another. You either have to destroy them or sit down at the table and negotiate with them because there will be no peace without having some Hamas leaders involved there. Can Hamas, in the foreseeable future, be moderated and brought to the table to negotiate a two-state solution with the Israelis?

Brzezinski: By becoming a member of the coalition Palestinian government, a minor member of that coalition, Hamas, in effect, is endorsing the position adopted by Abbas, the leader of the Palestinians, which recognizes Israel, which recognizes the notion of coexistence between two independent, but friendly States, this is a big change. They don’t have to say it because it would be a humiliating rejection of their past [Brzezinski is making up stories again–it’s not that Hamas is keeping quiet about moderating, it’s that they’re showing their lack of moderation by sending rockets into Israel and broadcasting that they want Israel destroyed].

Scarborough: Is that coalition falling apart between the Palestinian Authority and Hamas?

Brzezinski: I don’t know. But if the Israelis pulverize Gaza, it will not force the enhancement of the moderate forces of the Palestinians including on the west bank. This is a lunatic policy, which has been tried over years and years, but it has a purpose, to prevent a peace settlement and, unfortunately, the coalition in Israeli doesn’t want this.