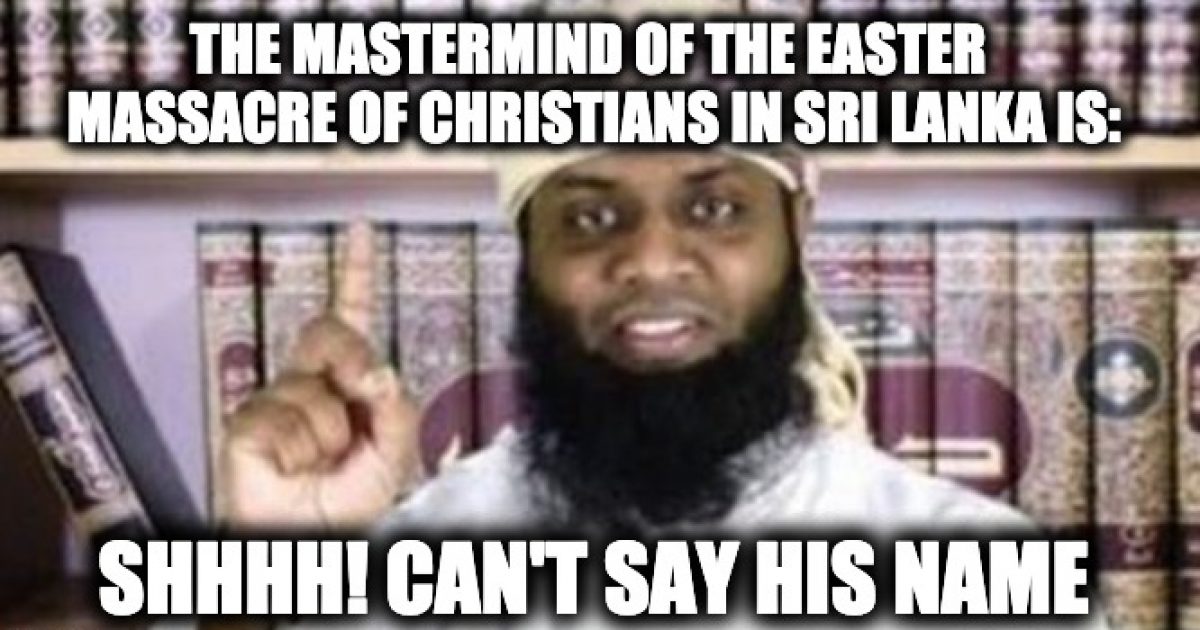 In case it was unclear, "Islamophobia" is now simply a term used to shut down and shame any criticism of Islamic Supremacy. pic.twitter.com/wWVJahaeSU

But of course, Al-Jazeera would say that!

Al Jazeera’s never exactly been a reliable source of news when it comes to Islamist atrocities. So it’s not surprising that an Al Jazeera English reporter cried “Islamophobia” in response to reports that an outspoken extremist Muslim leader had a part in the attacks in Sri Lanka that killed almost 300 people and injured 500 others visiting local Christian Churches for Easter Sunday services.

Al Jazeera English reporter Saif Khalid blasted CNNNews18 on Sunday for reporting that the bombings were linked to an Islamic supremacist named Zahran Hashim. On April 21 — via the outlet’s Twitter page — CNNNews18 stated, “Face of #SriLankaTerrorAttack revealed on CNN-News18. Zahran Hashim suicide bomber behind the attack at Shangri La Hotel.” The news source also reported that, according to “top intel sources,” Hashim had planned an attack that for April 4, but it was thwarted.

If you call Islamophobia on the reporting of an Islamist terrorist attack, you just might be a jihadi or maybe just another enabler which is pretty much the same thing. Oh and one important point. Mentioning the name Zahran Hashim, without mentioning his faith makes one Islamophobic.

Mentioning the name Zahran Hashim, without saying his faith makes one Islamophobic. In fact, long before the massacre of Christians on Easter, Muslims in Sri Lanka were warning about this animal.

He began posting videos online three years ago calling for non-Muslims to be “eliminated,” according to the Daily Mail.

Muslim leaders reportedly offered repeated warnings about him with no obvious response.

“Some of the intelligence people saw his picture but they didn’t take action,” N.M. Ameen, president of the Muslim Council of Sri Lanka, told the Daily Mail.

“Basically, he was saying non-Muslims have to be eliminated,” Ahamed told the Daily Mail.

Ahamed told the Telegraph, “We were very concerned that this guy was preaching hate on social media and uploading a lot of videos.”

By reporting Hashim’s name the media wasn’t being Islamophobic, they were being accurate.  Al Jazeera should consider themselves lucky, here in the US we aren’t used to the MSM being accurate.