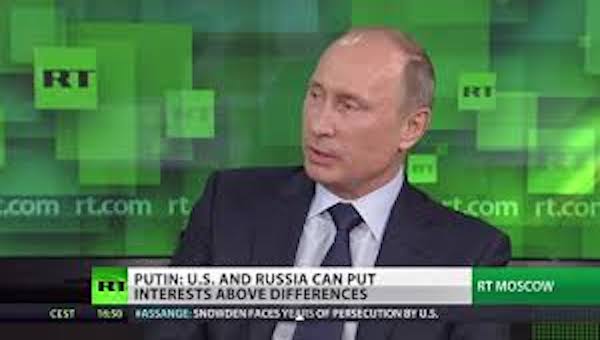 I watched a CNN report about Russian atrocities in Ukraine when the email arrived. It was from a producer for RT, the Russian government television network, asking to interview me about what she called “the American media’s collusion with the Third Reich.”

Why is Russian Television suddenly interested in how U.S. journalists covered Hitler? Evidently, it has to do with Vladimir Putin’s bizarre references to Nazis in his attempts to justify the Russian invasion of Ukraine.

On the day the RT producer’s email arrived, the RT website featured articles claiming that the Ukrainian army is filled with “neo-Nazis,”; alleging that Russian citizens living in Ukraine are under attack from “neo-Nazi groups integrated into the government of Ukraine”; and asserting that the Biden administration is carrying out “genocide” against Native Americans in Nevada.

RT.com also features wild accusations against the American news media, such as denouncing U.S. journalists for “vilifying” the January 6 rioters. Presumably, such nonsense is a ham-handed attempt to undermine the credibility of media outlets that have been reporting about Russian atrocities in Ukraine.

The RT producer’s claim that the U.S. media “colluded” with the Nazis in the 1930s aligns with the Putin regime’s contention that the Ukrainians and their American supporters are all Nazis or Nazi-sympathizers.

It’s a classic propaganda device—take the kernel of truth within a known historical episode, tear it out of its original context, and then twist and magnify it to suit some contemporary political purpose. Yes, many major U.S. newspapers downplayed or ignored news about the Holocaust–but that was poor journalism (and, in some cases, a kind of antisemitism), not “collusion with Nazism.”

Such anti-American propaganda is a staple of RT. Originally known by its full name, “Russia Today,” RT was created by the Putin regime in 2005. It is a propaganda agency controlled and financed by the Russian government. Since 2017, its representatives in the United States have been required to register as foreign agents of the Russian government.

However, I wouldn’t have known any of that from the producer’s email. She described RT as an “international TV channel” with no clue about its mission, financing, or governance. She never even used the word “Russia.”

Obviously, I have no interest in being used by Putin’s television network for his propaganda purposes; I replied that I would agree to an interview only on the condition that my full comments be broadcast, including my thoughts on how the lessons of the 1930s are relevant today. I explained that I would point out, among other things, that:

d
The RT producer’s reply was not unexpected, but it was loaded with irony. “We are not interested in airing propaganda, nor including analysis which are propaganda themselves,” she said of my intended remarks. Pretty funny coming from a full-time propagandist for the Putin regime! I guess I won’t be hearing from RT again.
g
f
Dr. Medoff is the founding director of The David S. Wyman Institute for Holocaust Studies and the author of more than 20 books about Jewish history and the Holocaust. His most recent book, America and the Holocaust: A Documentary History, was published by the Jewish Publication Society of America / University of Nebraska Press. And available on Amazon(as are his other books).
wouldn’t let me say
wouldn’t let me say
https://lidblog.com/
pp
pp
Facebook Twitter Flipboard