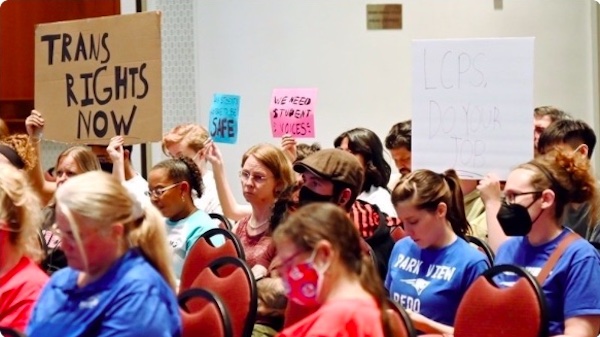 The anti-parent, very woke Loudoun County school board has struck again. This time it’s encouraging an effort to silence parents from speaking up at board meetings. The board is, calling what they say “hate speech.”

This latest move comes on the tail of a petition started by a radical gay activist who wants to use the schools to groom children for sexual abuse at the hands of LGBTQ advocates. They already allow it for boys abusing girls.

The petition was started by gay teen Andrew Pihonak who wanted the board to declare any talk contrary to the LGBTQ agenda as “hate speech.” Pihonak launched his petition after a parent called homosexuality “immoral” at a school board meeting.

Parents had attended the meeting to voice their anger after the school board tried to hide multiple sexual assaults of students in the district.

Per The Daily Caller:

The petition misrepresents parents at the Dec. 13 school board meeting who are focusing on holding the school board accountable, Colin Doniger, a Loudoun County parent, told the DCNF.

“The petition is misleading as it relates to parental comments at the Dec. 13 school board meeting,” Donniger told the DCNF. “Parents, including myself, were there on the 13th to speak out about the utter failure of the Loudoun County Public School administration identified in the special grand jury report. There was very little reference at all in that meeting to gender dysphoria promoting policies, beyond the fact that the perpetrator of the sexual assault was a male who wore a skirt and had access to the women’s bathroom.”

Scott Mineo, a Loudoun County parent, told the DCNF that the comments made by a majority of parents at the school board meeting were about the mistakes the school administration had made, rather than the LGBTQ community.

“The list of unimaginable and unconscionable actions or lack thereof of the Loudoun County Public Schools administration is great,” Mineo told the DCNF. “These items have zero to do with the LGBTQIA+ community but all of us, all of our kids, regardless of race, sex, or religion. Not everything is about them, and the sooner they realize that, the sooner they can help us fight and expose the Loudoun County Public Schools administration.”

At the Dec. 13 meeting, parents demanded resignations from board members after a special grand jury report revealed that the school board failed to alert the community of multiple sexual assaults.

Here’s the real issue. It’s not about gay, lesbian, or LGBTQ. Personally, I have no problem with those communities. But just like the protests during this past spring’s curriculum, some subjects are not the school board’s responsibility. The woke Loudoun County school board doesn’t; believe the parents should have any input in their kid’s education.

This post was produced by The Lid AND iPatriot.