It is time for corporate America to put the interests of their customers and shareholders first rather than surrendering to the woke mob. 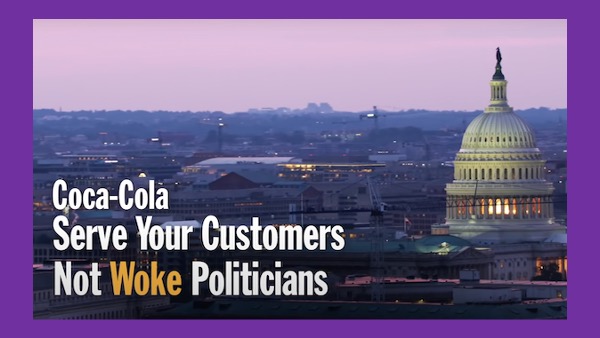 Woke corporate CEOs who act like politicians shouldn’t be surprised when they get treated like politicians. This week a consumer advocacy organization, Consumers’ Research, launched a million-dollar attack ad campaign against woke corporations like Nike, Coca-Cola, and American Airlines. The ads are part of a new initiative to hold companies accountable to their customers.

The ads are sharply critical of the CEOs of American Airlines, Coca-Cola, and Nike. The campaign’s goal is to force companies to reconsider some of these political stances that they’ve taken. The ads will run on CNBC, Fox Business, and local stations in the cities where these companies are headquartered.

Why is @AmericanAir appeasing radical politicians?

To distract from their CEO's $10M+ payday, despite laying off thousands of workers & receiving a multi-billion-dollar bailout from the taxpayers the same year.

One ad criticizes American Airlines CEO Doug Parker for high pay at a time of layoffs and taxpayer bailouts. Another ad targets Coca-Cola CEO James Quincy over obesity in America, while a third ad criticizes Nike CEO John Donahoe over allegations of forced labor in China. The group’s executive director, Will Hild, told CNBC they want to send CEOs a clear message, “Increasingly, they’re taking positions on legislation that have nothing to do with their business, and this is at the same time that the quality of their products and services is going down. They’ve taken their eye off the ball.”

For its part, American Airlines is not backing down from its attacks on new voter integrity laws in Texas and Georgia.  The company released the following statement in defense of its political activism, “American Airlines had this to say about their position they said, as a Texas-based business, we must stand up for the rights of our team members and customers who call Texas home and honor the sacrifices made by generations of Americans to protect and expand the right to vote.”

“It is time for corporate America to put the interests of their customers and shareholders first rather than surrendering to the woke mob.  Americans for Limited Government is leading the fight to eliminate the anti-trust exemption that Congress has granted Major League Baseball after their disastrous decision to punish Georgia by moving the Atlanta All-Star game to Denver in the wake of Georgia’s new election integrity laws. The anti-trust exemption allows MLB to operate as a monopoly. We are having an impact, and this ad campaign will make a huge difference in letting every corporation know that this issue isn’t disappearing.”

If you would like to send an email to your Member of Congress and senators urging them to eliminate MLB’s ability to operate as a monopoly, simply click on the link below.