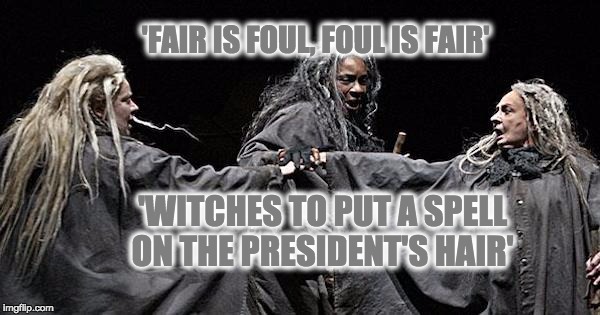 Fair is foul, and foul is fair:
Hover through the fog and filthy air.
(Macbeth Act 1, Scene 1)

No this is not about another political attack by the likes of Hillary Clinton, Nancy Pelosi, and Debbie Wasserman Schultz, we’re talking real witches. Apparently a group of witches are planning to “bind” President Trump in a mass spell-casting action this weekend. Bind? Sounds a bit kinky.

Both the Huffington Post and the Sydney Morning Herald have reported about this mass spell casting. And for those novice witches there is document with instructions for casting a spell on Trump “making the rounds in a number of magical groups” after being “created by a member of a private magical order who wishes to remain anonymous”.

Personally after reading the spell on line, I’m confident it wont work as doesn’t contain any of the ingredients specified by the witches in Shakespeare’s Macbeth, Act 4, Scene 1:

First Witch
Round about the cauldron go; In the poison’d entrails throw.
Toad, that under cold stone, Days and nights has thirty-one
Swelter’d venom sleeping got, Boil thou first i’ the charmed pot.

Second Witch
Fillet of a fenny snake, In the cauldron boil and bake;
Eye of newt and toe of frog, Wool of bat and tongue of dog,
Adder’s fork and blind-worm’s sting, Lizard’s leg and owlet’s wing,
For a charm of powerful trouble, Like a hell-broth boil and bubble.

Third Witch
Scale of dragon, tooth of wolf, Witches’ mummy, maw and gulf
Of the ravin’d salt-sea shark, Root of hemlock digg’d i’ the dark,
Liver of blaspheming Jew, Gall of goat, and slips of yew
Silver’d in the moon’s eclipse, Nose of Turk and Tartar’s lips,
Finger of birth-strangled babe Ditch-deliver’d by a drab,
Make the gruel thick and slab: Add thereto a tiger’s chaudron,
For the ingredients of our cauldron.

The anti-Trump spell “A Spell to Bind Donald Trump and All Those Who Abet Him”, is due to be performed, midnight on Friday night (EST) and on “every waning crescent moon until [Trump] is removed from office”. I guess they mean eight years from.

In witch’s jargon a “binding spell” has nothing to do with kinky sex, it is supposed to restrain the target. It wont change any of the policy that the president has done so far but it supposedly will restrain his policies in the future.

News: “Witches worldwide are planning to cast a spell on Donald Trump on February 24th. Here’s how to join them.”
Me: pic.twitter.com/WjeaReiBk8

witchcraft brothers and sisters: remember to perform the binding ritual in a cleansed area! you do not want bad energy negating the spell!

So apparently witches nationwide are casting a binding spell tomorrow night on 45. Count me in. I’ve already got all the supplies!!

A Facebook group has been set up for the spell-in, “attracting an incredible mix of genuine believers in magic and Wicca, as well anti-witch Christians and confused members of the alt-right determined to shut this ungodly thing down.”

Those wishing to take part in the spell will require a small, unflattering picture of the US President, as well as a tarot card (“from any deck”), a tiny stub of an orange candle, a pin or small nail, a white candle (of any size), a small bowl or water, a small bowl of salt, “any” feather”, a box of matches or a lighter, and an ashtray or a dish of sand. [Note: the directions specify that if you don’t have the stub of an orange candle you can use a baby carrot instead.]

See what I mean? Not even an eye of the newt!. Let’s see what the president does on Saturday, the day after the spells are cast.