Will the Next California Gov. Be a Terrorist Supporter ?

By Debbie Schlussel Republicans always claim the mantle of the anti-Jihadists. And for the most part, they are. But when a supporter of jihad and terrorism comes to the midst of the G.O.P., that anti-jihadist/counterterrorist mantle comes crashing down. The Republican Party simply refuses to denounce pan-Islamists in its midst I’ve detailed that repeatedly on this site, from Michigan and Ohio GOP officials hanging out with and praising CAIR to pan-Islamist Grover Norquist’s puppetmaster machinations at the Bush White House. Now, the G.O.P. has an interesting opportunity to finally show it means business against terrorism . . . in the California gubernatorial race. Since Governor Arnold Schwarzenegger is term-limited and elections for the new guy are being held in November 2010, some candidates are already setting up shop. 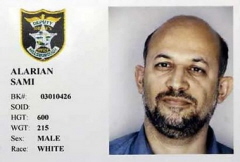 Jihad-enabling GOPer Tom Campbell Wants to be California Gov. On the G.O.P. side, one of those is the notorious former Congressman Tom Campbell. Saturday’s Wall Street Journal reports that Campbell stepped down as Dean of the business school at U.C.-Berkeley and launched an exploratory committee. Sadly, this will go beyond mere “exploration.” Campbell is running for Governor of California. Campbell, a liberal Republican, is well known for his support for Islamic terrorists. He made the cause of Islamic Jihad founder and U.S. frontman Sami Al-Arian his cause. And he made extremist Muslims whose families were active in Al-Qaeda his key policy advisors. From my September 2005 column about how Jewish Republicans were set to host Campbellreplaced him as a result of my column):

When [Sami] Al-Arian was fired from the University of South Florida, from which he ran his terrorist network, Campbell wrote a letter of support praising Al-Arian and asking the University president to reconsider her decision. In the letter, Campbell noted that Al-Arian helped him raise money for his failed U.S. Senate bid. [Campbell’s] donors have included Nihad Awad, executive director of the anti-Israel Council on American-Islamic Relations (CAIR) . . . . Other Campbell donors, besides Al-Arian, included Muthanna Al-Hanooti, an official of an Islamic charity that is a major donor to what the FBI identified as HAMAS’ Jordanian operation [DS: Since I wrote this, Al-Hanooti was indicted as a spy for Saddam Hussein]; and Tariq Hamdi, an Al-Arian associate, who was indicted last month on immigration and mortgage fraud charges and has fled the country. According to testimony in the trials of perpetrators of the 1998 U.S. embassy bombings, Hamdi provided the satellite phone battery to Osama Bin Laden that was instrumental in those bombings. Another donor, Abdurahman Alamoudi, was captured on video in front of the White House announcing his support for HAMAS and Hezbollah. . . . His indictment connected him with assorted Islamic terrorist groups and activities. Those are Campbell’s donors. Then, there are Campbell’s former employees. Suhail Khan held several key positions for Campbell, including Press Secretary and Policy Director. But Khan is an Islamist who invited terror supporters and anti-Semites to the Bush White House (where he once worked) and whose father brought Al-Qaeda leader Ayman Al-Zawahiri into the United States to raise money for Al-Qaeda. His father, Mahboob Khan, late founder and head of the Santa Clara Mosque, brought Zawahiri into the U.S. twice on a fake passport in the mid-’90s to raise money for Al-Qaeda. . . . With a policy director like Suhail Khan, it’s no surprise that Campbell consistently voted against Israel while in Congress.