Will China Reinfect The World? Will Biden React Correctly This Time? 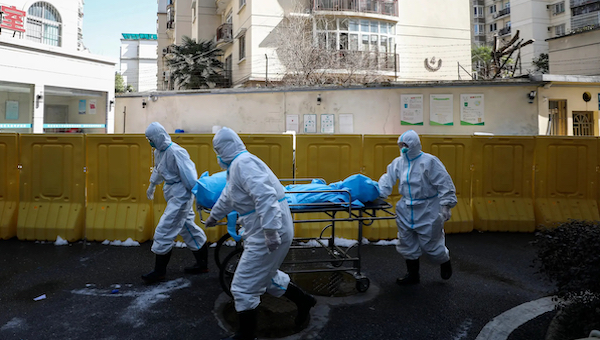 If you’ve been following the news, you know that China has been amid a surge of Covid that has infected at least 248 million people. They’ve drastically locked down and done everything they can to the detriment of their own economy to stop the disease. But experts are concerned that China’s latest move could literally reinfect the world: they lifted their restrictions on international travel yet again as of January 8, (Even though the surge in coronavirus cases continues.)

The Biden administration will impose testing requirements for any travelers from China after calling Trump “xenophobic” for imposing restrictions on China residents visiting the U.S.

But where will President Joe end up? Will he be the pre-election Joe trying to divide the country or the COVID despot he became?

Now that experts agree they saved lives, Biden's rewriting history and pretending he supported them all along.

Our new digital ad looks at the facts. pic.twitter.com/TQgQPi9S1Q

The health body added that outbound tourism, which plummeted to almost nothing during the pandemic, will resume in an “orderly” fashion. It also removed the cap on the number of international flights to and from China.

The regime’s immigration administration said that passport applications for citizens intending to travel internationally will resume on Jan. 8, 2020

The border reopening comes as China is gripped in a surge of COVID, which by the regime’s own estimates infected 248 million people in the first 20 days of December. Analysis by UK researchers also projected 167 and 279 million cases nationwide, which could lead to between 1.3 and 2.1 million deaths.

Earlier this month, the communist regime abruptly reversed its draconian zero-COVID policy that had battered the economy and caused extreme suffering among hundreds of millions who endured sporadic lockdowns for nearly three years.

But the lack of preparation for the lifting of the policy has resulted in health services and mortuaries being overwhelmed, and severe drug shortages as the virus spiral out of control across the country.”The Epoch Times

Will China’s move reinfect the world? Or have we learned enough by now to prevent it?

The ineptitude of our own leaders caused literally millions of Americans to destroy their immune systems from lockdowns and vaccines. Adults and children alike lack their full natural immunity to fight off coronavirus diseases that may be spread from China. Though we are now much more knowledgeable about COVID, some experts are sounding the alarm, but not with team Biden.

January 30, 2020 – Biden Public Health Advisory Committee member Dr. Zeke Emanuel says, “Everyone in America should take a very big breath, slow down, and stop panicking and being hysterical. We are having a little too much histrionics on this… And people should remember not to panic… And the best thing we have is the seasonality. It’s going to go down as spring comes up.”

January 31, 2020 -The Trump administration declared the CoronaVirus a public health emergency. Trump announced the China travel ban. Each of these actions should have told the public COVID-19 was an enormously big deal.

January 31, 2020 – Speaking at a campaign town hall in Iowa shortly after the Trump Administration announced restrictions on travel from China, Biden brought up the CoronaVirus and suggests President Trump is not acting “rationally.” “This is no time for Donald Trump’s record of hysteria and xenophobia – hysterical xenophobia – and fearmongering to lead the way instead of science,” says Biden.

He doubled down the next day:

We are in the midst of a crisis with the coronavirus. We need to lead the way with science — not Donald Trump’s record of hysteria, xenophobia, and fear-mongering. He is the worst possible person to lead our country through a global health emergency.

In the Fall of 2019, at least 5 million Chinese were allowed to travel overseas without screening for Covid. The result was a worldwide pandemic. Is this a “strategy” designed to send disease throughout the world?

One virologist thinks so:

“The CCP is not sharing data, and the international community doesn’t know how many different virus variants are spreading in China, and whether there are other compound infections. Under such circumstances, it is extremely irresponsible for the CCP to let the people out of the country which is a huge epidemic area. Put another way, it has a very treacherous purpose and is very malicious.” Sean Lin, a virologist and former lab director at the viral disease branch of the Walter Reed Army Institute of Research

New restrictions for travel from China, Hong Kong, or Macau to the US include submitting a negative test two days before departure for all passengers over 2 years old beginning Jan 5. Those who tested positive ten days before departure must show proof of recovery from the disease. But the CDC warned that new variants could emerge from China’s removal of restrictions, and it will take some time for the medical community to “study” them. The US December 23 travel advisory against going to China also warned of the surge in disease and arbitrary enforcement of restrictions.

There you have it: take your vitamins and guard your immune system. Don’t level hate against Chinese travelers. Simply be prepared, Because we had a president who was laissez-faire at the beginning of the pandemic and then became tyrannical when it started to make him look bad.