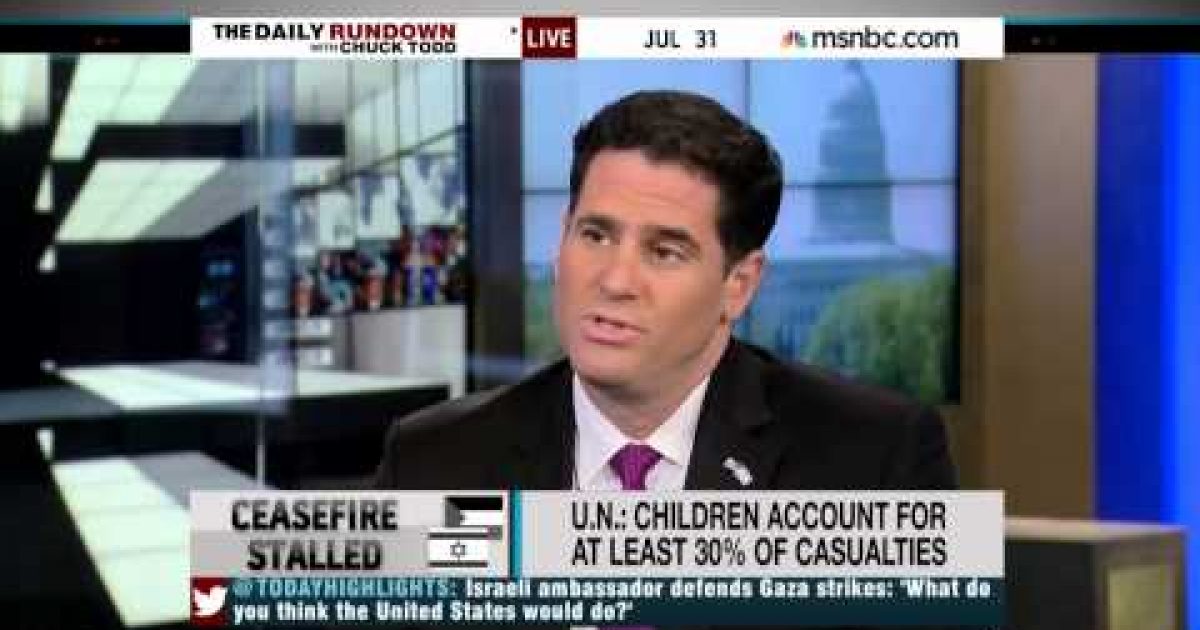 While appearing on the Thursday edition of Chuck Todd’s MSNBC programThe Daily Rundown, Israeli Ambassador Ron Dermer asked Todd if he would help correct a false accusation made by MSNBC’s Gaza-based reporter and Hamas sympathizer, Ayman Mohyeldin, who blamed Israel for an attack on a school which was actually caused by terrorist rockets. Instead of acknowledging Dermer’s request, Todd ignored Dermer and moved to another question.

Todd’s line of questioning focused on the civilian casualties. He acknowledged that Israel took many steps to avoid casualties and naively asked why Israeli soldiers didn’t go door to door (under fire) and move the civilians to other areas. Dermer’s diplomatic response was to put Hamas’ radicalism in context:

We have to understand, Chuck, who we’re dealing with. This is al Qaeda. This is Israel’s al Qaeda, that’s what Hamas is. They are committed to our destruction. They’re a genocidal organization. They don’t care about their own people. They were dancing on 9/11, dancing. Hamas was dancing with thousands of Americans dead. The Prime Minister of Hamas condemned the United States for killing Usama Bin Laden. So you’re dealing with al Qaeda. So ask me, how would you accompany these civilians, help them get out of harm’s way when al Qaeda fighters are actually attacking your troops. So this is very difficult. It’s very complicated. We’re doing things that no country has done to get civilians out of harm’s way. We’re not perfect, we make mistakes. We investigate it. It’s important to always report the facts.

Dermer went on to talk about the false story and asked Todd and Ayman Mohyeldin to correct it, but Todd didn’t respond. Dermer continued:

A couple of days ago, you know, there was an attack on a hospital in Gaza and there was an attack on a refugee camp. One of your reporters actually rushed to judgment; said it was an Israeli drone. It turns out it wasn’t an Israeli drone. It was a rocket fired by Islamic Jihad. Four rockets were fired within Gaza. One of them went to the sea, one of them hit that hospital, one of them hit a refugee camp, one of them went to Ashkelon and was intercepted by Iron Dome. So it’s important after you make an allegation, I would just ask you, Chuck, and your reporter in Gaza, correct the mistake he made.

Neither Todd nor Ayman Mohyeldin corrected the false story later on Thursday or on Friday through 4:45pm EDT.