Why Isn’t MSM Reporting Richard Falk’s Hatred Of America, Israel, & Jews May Be Behind His Israel-Apartheid Claims? 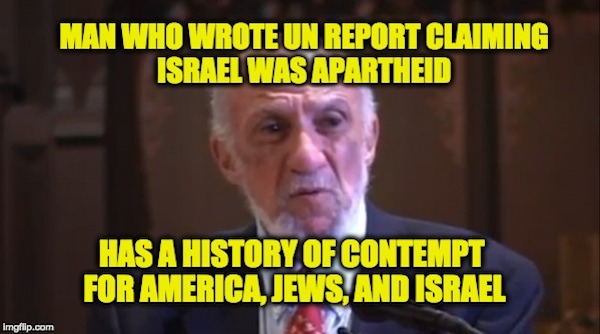 Last week the United Nations Economic and Social Commission for Western Asia (ESCWA), published a report Israel of accusing Israel of being an “apartheid regime.”

The media reported that the paper was published, that U.S. Ambassador to the US Nikki Haley demanded the false report pulled, and when it was pulled that ESCWA Executive Secretary/ Jordanian diplomat Rima Khalaf who was one of the report’s authors quit because the report was pulled. The coverage gave the impression that the only reason the report was pulled was the U.S. objection to a report critical of its ally Israel, instead of the truth, that it was a biased tome written by a Jordanian diplomat and Richard Falk the former U.N. special rapporteur to the Palestinian territories. Falk is an American who believes 9/11 was an inside job, has said that the United States deserved the Boston Marathon bombing, and has a history of making anti-American, anti-Semitic and/or anti-Israel statements. In other words, like so much from coming out of the U.N., it was hopelessly biased before pen was ever put to paper.

Based in Beirut the ESCWA’s membership is comprised of 18 Arab countries, according to its website, which lists the state of Palestine as a full member, and works to strengthen cooperation and promote development.

The report labeling Israel as “Apartheid.” was immediately and rightfully rebuked by Ambassador Haley and even the Secretary General of the UN António Guterres distanced himself from the report:

“The United States is outraged by the report,” said Haley in a statement. “The United Nations secretariat was right to distance itself from this report, but it must go further and withdraw the report altogether.”

Based in Beirut, ESCWA is comprised of 18 Arab countries, according to its website, which lists the state of Palestine as a full member, and works to strengthen cooperation and promote development.

“That such anti-Israel propaganda would come from a body whose membership nearly universally does not recognize Israel is unsurprising,” said Haley.

UN spokesman Stephane Dujarric said “the report as it stands does not reflect the views of the secretary-general” and was done without consultations with the UN secretariat.

It is no surprise this committee of 18 Arab States picked Richard Falk to author the report. Falk is, has a history of anti-Semitic, anti-Israel, and anti-United States comments/actions and official opinions.

While Falk contends he bears no ill will against the Jews, but that belies the facts.

In 2011, British Prime Minister David Cameron,‘strongly condemned” Falk for publishing a cartoon showing a dog wearing a yarmulke with a Jewish Star, and wearing a USA shirt, urinating on lady Justice, and chewing on a dead body. This cartoon was so bad that even the left-loving ADL issued a condemnation. 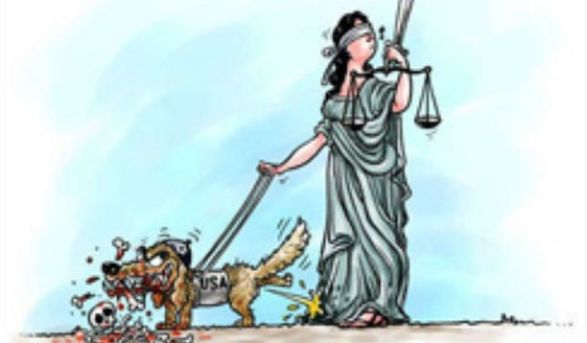 Only after the cartoon caused a firestorm Falk reacted, He initially denied it was ant-Semitic then finally apologized to ease the pressure (then changed his reason for the apology).

Falk gave a glowing cover endorsement for the anti-Semitic book “The Wandering Who?”

Attorney Dershowitz read the hate book endorsed by Falk, and wrote an essay pointing out the books many anti-Semitic assertions including:

Falk’s support of false and hateful charges about Jews isn’t limited to his praise of one anti-Semitic book. As reported by UN Watch, Falk’s blog is loaded with “crude anti-Semitic comments” written by contributors Falk defends, praises, and refuses to remove.

Yitzhak Levanon, Israel’s ambassador to the United Nations, responded to Falk’s appointment by recalling some of the professor’s most notorious writings, including his unapologetic use of the word “holocaust” to “portray the ongoing and intensifying abuse of the Palestinian people by Israel.” The charge [against Falk]  is well founded. In a July 2007 article titled “Slouching Toward a Palestinian Holocaust,” Falk rhetorically asked whether it was “an irresponsible overstatement to associate the treatment of Palestinians with this criminalized Nazi record of collective atrocity?” Falk’s revealing answer: “I think not.” Demonstrating that he was incapable of evaluating Israeli policy with balance – as his new UN post would seem to require – Falk proceeded to condemn Israeli policies as a “holocaust-in-the-making” and deplored what he called the “genocidal tendencies” of the Jewish state.

Falk is also a 9/11 “truther.” When he worked at the United Nations he wanted an investigation as to whether “some sort of controlled explosion from within” destroyed the Twin Towers, he told FOXNews.com:

“I do think there are questions that haven’t been answered, questions about the way the buildings collapsed and the failure to heed a variety of signals that there was danger coming,” Falk said.

Falk denied that he disagreed with the official (and truthful) account of 9/11, he said the charges against him of being a “truther” “were made to divert “attention from my criticisms of Israel’s occupation policies in the Palestinian territories.”

But any examination of Falk’s statements and actions since 9/11 verify that he has tried to convince people the “real” story of 9/11 is unknown and needs to be investigated. This includes the fact he appeared on Kevin Barrett’s Truth Jihad Radio show more than once, making claims such as:

“Questioning that deeply the official version of 9/11 does touch the third rail of American political sensitivities, and there is an attempt to discredit and destroy anyone that makes such a bold statement,” Falk continued. “This has intimidated a lot of people, and makes people more reluctant than they might otherwise be to raise these suspicions about how to understand that transformative event that has been used to project American power around the world and to engage in these very destructive and dysfunctional wars, Iraq and Afghanistan being the main examples.”

Although he doesn’t say this one was an inside job, Falk contends that the US has itself to blame for the Boston Marathon bombing. In an op-ed in the 4/22/13 “Foreign Policy Journal” titled “ A Commentary on the Marathon Murders” Falk contended that the U.S., because of its fantasy of global domination, belief that Islamist terrorists were behind 9/11, and because it listens to Israel, got what it deserved in Boston.

That wasn’t his only over-the-line attack on America. In a 2003 article titled “Will the Empire be Fascist?”  Falk cites “unaccountable military power,” “uncritical and chauvinistic patriotism,” and “an authoritarian approach to law enforcement” as indicators of America’s move toward fascism. Less than two years after 9/11, Falk’s article claimed other examples of the slide toward fascism include “periodic alarmist warnings of mega-terrorist imminent attacks that fail to materialize, and by an Attorney General John Ashcroft, “who seems to exult in an authoritarian approach to law enforcement.”

In a  NY Times piece called “Trusting Khomeini,” published nine months before our Iran embassy people were taken hostage, Falk contented that Americans were giving the Ayatollah a bad rap:

More even than any third‐world leader, he has been depicted in a manner calculated to frighten. President Carter and Zbigniew Brzezinski have until very recently associated him with religious fanaticism. The news media have defamed him in many ways, associating him with efforts to turn the clock back 1,300 years, with virulent anti‐Semitism, and with a new political disorder, “theocratic fascism\

Despite the above and many other writings and statements, the mainstream media accounts reported Nikki Haley putting pressure on the U.N. to remove Richard Falk’s report. But that was only a small part of the story.  The mainstream media neglected to report about one of the two authors of the report, Richard Falk’s hatred of America, Jews, and the U.S.’s strongest ally in the Middle East Israel, a hatred that had to filter his vision of what is going on between Israel and the Palestinians.

The crazy part of it all is that Richard Falk is both American and was born Jewish. I cannot begin to explain why this man hates his country and faith so much. Perhaps the bullies at Hebrew school forced him to put his “fruit of the looms on his head” during religious classes instead of a yarmulke, or maybe they gave him lousy gifts for his Bar Mitzvah, maybe he hates brisket or he choked on a matzoh ball once during a Passover Seder. Nevertheless, the evidence above proves Richard Falk is a true Jew-hating Jew, who does not love or appreciate the United States, the country that allowed him to live in freedom, and utter the hateful things above which were ignored by the mainstream media this past week.

WATCH: ‘You Are The Renegades’ — Bongino’s CPAC Speech Rallies Base To Never Give Up
February 27th, 2021 Clash Daily

The Cranky Queen Violates Her Oath: Tells People They Are Selfish For Not Getting Vaxxed (Video)
February 27th, 2021 Sons of Liberty Media