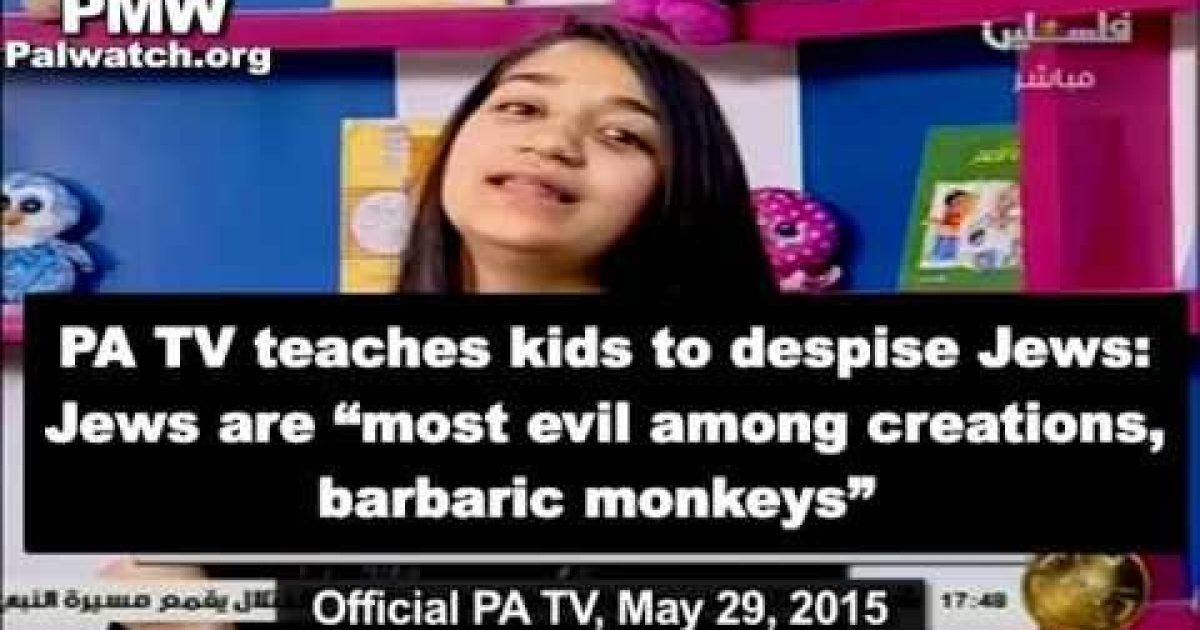 Remember on Israel’s election day when President Obama flipped out when  Bibi Netanyahu complained that, “Arab voters are going en masse to the polls” and thus threatening the country’s “rightwing government.” Netanyahu didn’t say stop them from voting he said so my supporters better come out and vote.  But that still is only part of what Bibi said soon after the video was posted, Netanyahu clarified that “what’s wrong is not that Arab citizens are voting, but that massive funds from abroad from left-wing NGOs and foreign governments are bringing them en masse to the polls in an organized way, thus twisting the true will of all Israeli citizens who are voting, for the good of the Left.”

President Obama had a cow over what he claimed was Bibi’s racism.  But if Obama is so concerned with racism why isn’t he slamming the Palestinians for what they call Jews their official TV network? As reported by Palwatch.org:

The PA teaches that Jews have an intrinsically evil nature and that this conflict is part of Islam. The PA repeatedly sends the message that the conflict is much more than a conflict over territory.

On the latest broadcast of the official PA TV children’s program The Best Home, a young girl recited a poem calling Jews “barbaric monkeys,” “the most evil among creations,” and those “who murdered Allah’s pious prophets.” Jews are said to be “throngs… brought up on spilling blood… impure… [and] filth.”

In spite of all this, the girl, continuing her recital, declares she is not afraid of the Jews’ “barbarity” because Jerusalem will “vomit out” the impure Jews. The poem continues, “My heart is my city and my Quran”:

“I do not fear the rifle
because your throngs are in delusion and are ignorant herds
Jerusalem is my land, Jerusalem is my honor
Jerusalem is my days and my wildest dreams
Oh, you who murdered Allah’s pious prophets (i.e., Jews in Islamic tradition)‎
Oh, you who were brought up on spilling blood
Oh Sons of Zion, oh most evil among creations
Oh barbaric monkeys
Jerusalem opposes your throngs
Jerusalem vomits from within it your impurity ‎
Because Jerusalem, you impure ones, is pious, immaculate
And Jerusalem, you who are filth, is clean and pure
I do not fear barbarity
As long as my heart is my Quran and my city
As long as I have my arm and my stones
As long as I am free and do not barter my cause
I will not fear your throngs, I will not fear the rifle”
PA TV host:‎ “Bravo! Jerusalem is the eternal capital of Palestine, we will never forget it.‎”

But Obama doesn’t really care–he doesn’t recognize bias against Jews or Christians in the Middle East.