Why a Good Bush Went Bad in the Mid East

Parler Facebook Twitter Flipboard
Remember when George Bush had a sense of morality supporting his foreign policy? When he rewarded those who fought terrorism and punished those who supported that evil? The one who made peace dependent on a change in Palestinian society.

” I call upon [Palestinians] to build a practicing democracy, based on tolerance and liberty. If the Palestinian people actively pursue these goals, America and the world will actively support their efforts. . . . A Palestinian state will never be created by terror — it will be built through reform. And reform must be more than cosmetic change, or veiled attempt to preserve the status quo. True reform will require entirely new political and economic institutions, based on democracy, market economics and action against terrorism.”

Many critics argued at the time that linking the peace process to a transformation of Palestinian society was a radical departure in peacemaking. It was. And it was long overdue. But now that brilliant departure is just a memory. Those days are gone. Now the United States talks about restraint in the face of Palestinian Terror–he talks about occupied territory and Dividing Jerusalem. This is a different George Bush.

On June 24, 2002, President Bush presented his vision for an Israeli-Palestinian peace. That we both would have greeted Mr. Bush’s speech with the same enthusiasm may come as a surprise. One of us is a former Soviet dissident who spent nine years in the Gulag and, after joining his people in Jerusalem, spent a decade in Israeli political life, serving as a cabinet minister during most of that time. The other is a Palestinian who has devoted his life to exposing human rights abuses perpetrated against his people, regardless of whether the government committing those abuses was Israeli or Palestinian. One is a Jew convinced of his people’s just claim to the Land of Israel. The other is an Arab convinced of his people’s just claim to the same land. 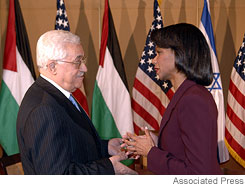 Rewriting The History of 9/11? Some Schools Are Trying
The Lid