Why Do Progressive Leaders Support the Antisemitic Blood-Libel?

Earlier this week I wrote a post about the blood-libel accusations made against Jewish people since…well all the way back to the right after Moses led us out of Egypt.  I was asked to rewrite my post as my weekly column for the Jewish Star.  As I reread the post it became apparent that I missed a major part of the story. Much of the Antisemitic blood libel in America comes from the progressive left and what’s worse is the people and organizations pushing the hatred are being given legitimacy by the leaders of the Democratic Party, including President Obama.

The blood-libel is alive and well today, but it all started during the first Passover. Jews were commanded to smear the blood of a slaughtered lamb on the doorposts of their homes so death would pass over them. Since that night Jews have been accused of using the blood of innocents in religious rituals.

The libel usually centers on Pesach, and that the blood of a Gentile child was kneaded into the mixture to make it “kosher.”

Like most anti-Semitic claims, this libel carries the secondary claim-Jews do not follow the Torah which expressly forbids us to ingest blood (read Vayikra, chapter 17 verses 10-14).

The blood libel has followed the Jews everywhere we have settled in the Galut (exile).

“Beware Russian parents. Keep watch over your children before the coming of April 2008, the Jewish holiday of Passover. These disgusting people still engage in ritual practice to their gods. They kidnap small children and remove some of their blood and use it to prepare their holy food (matzah). They throw the bodies (of the children) out in garbage dumps,” the announcements read.

In a March 2010 speech on Al-Aqsa TV, Salah Eldeen Sultan founder of the American Center for Islamic Research and the Islamic American University stated :

“The Zionists kidnap several non-Muslims – Christians and others… this happened in a Jewish neighborhood in Damascus. They killed the French doctor, Toma, who used to treat the Jews and others for free, in order to spread Christianity. Even though he was their friend and they benefited from him the most, they took him on one of these holidays and slaughtered him, along with the nurse. Then they kneaded the matzos with the blood of Dr. Toma and his nurse. They do this every year. The world must know these facts about the Zionist entity and its terrible corrupt creed. The world should know this.

Much of the blood libel in modern times takes a different form, false charges of Israeli massacres, the Jewish State being accused of targeting Arab children and even American Jews pushing the United States to go to war and massacre Arabs.

Just like in medieval times the blood libel is used to incite attacks on the Jewish people. Remember the Al Durah hoax? The young child who was supposedly shot by Israeli forces? Mainstream media across the globe picked up the video of a father desperately trying to shield his son from Israeli gunfire. The boy being shot dead.

That video and its pictures helped to incite the horrific homicide bombings of the second intifada. It was years later we learned that a Palestinian cameraman who worked for one of the French TV Networks staged the video. All along the French network the full tape showing the boy and his father rehearsing their act. The mainstream media was all too quick to accept the blood libel story of the child-hating Israelis because it fit their narrative.

The Goldstone report is another example. According to this UN commissioned report, during the Gaza War of 2008 Israeli soldiers deliberately targeted Palestinian civilians. The report was well received by the UN, world leaders and even the president of the United States who began calling for an independent investigation. The problem with the report was that Goldstone only interviewed Hamas sources for details on specific incidents and refused to consider Israeli evidence proving the claims as lies. Even though Goldstone himself now disputes the report’s claims, much of the world still believes its libels as truth.

Daily Kos, the largest progressive website/social community whose annual convention called Netroots Nation has been addressed by Secretary of State Clinton and her husband, Nancy Pelosi, Harry Reid and President Obama among others, makes it a habit of portraying Jews as blood-thirsty Nazis.

One political cartoon posted on the site shows a bloodstained Israeli flag with the “Jewish Star” morphed into a swastika. It still adorns a post called “Eulogy before the Inevitability of Self-Destruction: The Decline and Death of Israel,” which warns of “A Zionist movement multiplying like cancer cells”.

The illustration for another Kos post, “Zionism was and remains a racist ideology,” (since removed) shows Israeli foreign minister Lieberman as Adolf Hitler. It includes the word Zionism in blood and tattooed on his hand is a skull with the Star of David.

Other recent examples come from the Occupy Wall Street (OWS) movement, supported by our President, Democratic Party leaders, and even Long Island’s own Congressman Steve Israel.

The movement ideological hero is author Naomi Klein who claims that “[Some Jews] even think we get one get-away-with-genocide-free-card.” But she does say we have a reason for our genocidal tendencies—money. In her book The Shock Doctrine Klein explains that Israel is run by a vast military-industrial complex that purposely perpetuates war against the Palestinians so they can develop and more importantly sell, new weapons on the worldwide market.

The founders of OWS, an organization called Adbusters believes the Jews are forcing the world into bloody wars.

In an article Jazz and the Jihad published on their website, they claim Jews forced the US into Iraq and Afghanistan, and are trying to force America into an Iran war.

The Ziocons have some big appetite to satisfy. The same lobbies that led America towards this disastrous invasion in Iraq and Afghanistan are now doing whatever they can to push America towards intervention in Iran and Syria… It currently fights the last sovereign pockets of Muslim resistance.


The true aim of the Zionist lobbies is concealed. Instead the Zionist lobbies promote some righteous phony humanitarian alternatives. The American Jewish Committee (AJC), for instance, is aggressively lobbying against human rights abuse in Iran and Darfur. Since human rights issues are really close to my heart, I find myself wondering whether the Jewish organization shouldn’t rather be concentrating on the colossal war crimes that are daily repeated by Israel in Palestine 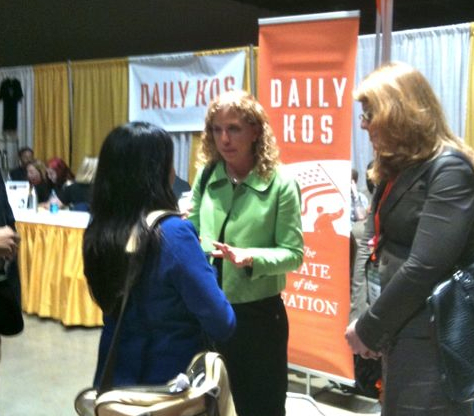 In the Torah we are commanded to “Remember what Amalek did to you on the way as you came out of Egypt. As we tell the story of our wondrous delivery from Egypt at our Passover Seders later this week, Amalek will still be out there accusing us of a lust for blood. Even worse is the fact our political leaders accept the purveyors of this libel into the mainstream, speak at their conferences, and support their movements. I do not believe their support is due to some latent Antisemitism on their own parts, but because of a crass desire to win elections.

On this Passover it is important that we remember Amalek and demand our leaders to disassociate from those organizations and people; that they speak out against their libels no matter the political consequences.

UPDATE: It Seems Debbie Wasserman Schultz has hired some interesting liaisons to the Jewish community, they call themselves the Jew-Baggers. My friend Javier writes about it here.