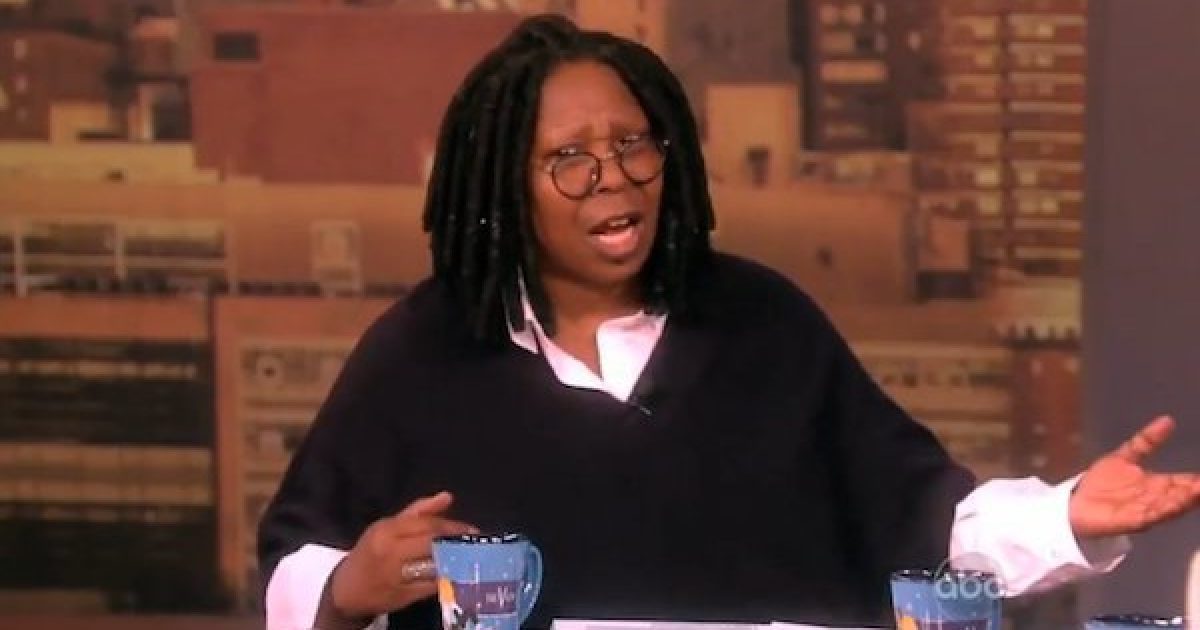 I have a request for Whoopi Goldberg.  I wish that she would go back to using her birth name Caryn Johnson, at least the Johnson part. Because of her adopted last name, some people may think she may be Jewish. To be perfectly honest there is enough Antisemitism in the world without people ascribing her statements to Jews. No Jew wants to take credit for her latest stupidity, suggesting that the President waterboard himself.

On Thursday’s edition of ABC’s The View, Whoopi Goldberg spoke about CIA Director-nominee Gina Haspel’s testimony at her confirmation hearing the day before. Ms. Johnson/Goldberg played a clip of Kamala Harris’ questioning of Haspel and then reminded the audience What the Guy in the White House said on the campaign trail.” And played a clip of Trump saying “torture works,”

After the clip, Goldberg suggested, “Well I would like to say is —I would like you [Trump] to try it and see how that… Because I don’t think anybody…I mean…you know..see…I think people who have actually been tortured, who are saying that this is not a good thing, you should listen to them because you have never been tortured and neither has Dick Cheney.”

OF COURSE they haven’t been tortured.  They also haven’t ever blown up twin towers full of people, or the Pentagon. To the liberals, Trump and Chaney are the combinations of Darth Vader and Thanos, but even if Whoopi got her wish, waterboarding was used to get information from terrorists, what information would we want to get from the president?  America’s secrets?

And for anybody who says waterboarding doesn’t work, that’s how we got Usama Bin Laden, Officials have said that one of the crucial clues that led to bin Laden was a piece of information about an al-Qaeda courier that came from September 11th mastermind Khalid Sheikh Mohammed or from the so-called 20th hijacker, Mohammad al-Qahtani.

Rep. Peter King(R-NY) who was chairman of the House Intelligence Committee explained, “The road to bin Laden began with waterboarding.” He added that the technique was a “moral imperative” that “saves lives”.

But there’s a bigger issue, at least a more personal issue, because of her stage name, the Jewish people can get blamed when she says stupid things like Trump should be waterboarded.

In the interest of tolerance and preventing Anti-Semitism, I believe that Ms. Goldberg should remove the cultural appropriation and change her stage name.

It’s true that the Jews are supposed to be the “chosen people,” but it’s time for Whoopi to choose someone else for a change. The Jews already have their fair share of famous embarrassments. Do you realize how hard it is every Father’s Day for Jews to see Woody Allen walk around with his wife/daughter? Who do you think got blamed when Barbara Boxer told General Michael Walsh to stop calling her the military approved Ma’am and start calling her senator. We Jews also have to take the blame for people like Courtney Love, David Axelrod, the obnoxious half of Geraldo Rivera,  a trio of female abusers; Al Franken, Eric Schneiderman, and  Harvey Weinstein. And don’t forget we’re stuck with Bernie Sanders and Chuck Schumer who doesn’t even know how to wear glasses correctly.

Don’t you get it???? For heaven’s sake Ms. Johnson, please get rid of the Goldberg!!

Come on Whoopi, why pick on the poor Jews? Try one of these names on for size:

Hey, I got an Idea!  Why don’t you change your name to Whoopi Ayatollah Seyyed Ali Khamenei? It fits nicely; they could even call you Supreme Leader like they do with Khamenei in Iran. Heck, you make that name change European leaders and the entire Democratic party will bow down to you and give you anything you want.

Wouldn’t that be cool? Give it a try! Or try one of the other suggestions or anything else! But PLEASE lose the Goldberg. Haven’t the Jews suffered enough?

Below is a video of Thursday’s segment.