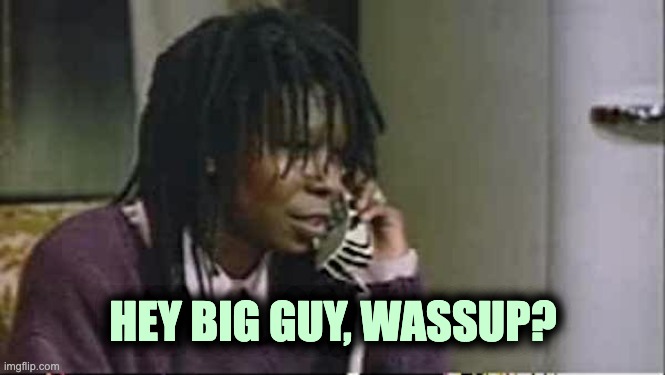 I am not a doctor of theology, but I never realized Whoopi Goldberg was a theology expert. Per Jewish tradition, I pray to God three times a day. I get the feeling the big guy upstairs does listen to my appeals despite that his answers aren’t always yes. I learned yesterday that when Whoopi prays to God, she gets an answer, not via a feeling in her heart, but a real direct answer…God told Whoopi that he supports Abortion. Whaddaya know?

The guest on The View was former castmate Elizabeth Hasselbeck: who is pro-life

The clash began after the conservative guest promoted adoption centers and pro-life “agencies” as great options for women who find it impossible to raise a baby. She urged women in these tough situations to “look for the nonprofits, look for the agencies that help you create a birth plan and match you with an adoptive family who may have suffered miscarriage after miscarriage who want to care for the baby.”

Hasselbeck added, “I don’t believe in giving women half the information out there.”

Steam began to pour out of Golberg’s ears. Whoopi Goldberg talks to God

The senior host of the view responded that the people who abort their fetus are simply exercising their God-given “freedom of choice,” even in committing Abortion.

Does that mean the 9/11/01 hijackers exercised their God-given “freedom of choice?”

As you know, God doesn’t make mistakes,” Goldberg insisted. “God made us smart enough to know when it wasn’t going to work for us. That’s the beauty of giving us freedom of choice,” she added, apparently implying that abortion, like adoption, is a choice that God allows women to discern for themselves.

Trying to be conciliatory in her approach, Hasselbeck told Goldberg, “He [God] loves you.” Goldberg acknowledged the sentiment, though she continued arguing her biblical justification for supporting a woman’s right to choose.

“Listen. I have no doubt, but I also know that God made me smart enough to know that if there are alternatives out there that can work for me, I will investigate them, but I also know God said, ‘Do unto others as you would have them do unto you.’ I will not make that decision for anybody,” she declared.

Gee, what will a fetus do to Whoopi?

I have read other things God said to humans (in Jewish scripture) that seem to disagree with Ms. Goldberg, such as “Be fruitful and multiply.” Thankfully the Big Guy wasn’t using multiply to give a math exam.

The Torah requires a monetary payment for causing a miscarriage. Specifically, the book of Shemot (Exodus) chapter 21:22-23 states:

“And should men quarrel and hit a pregnant woman, and she miscarries but there is no fatality, he shall surely be punished, when the woman’s husband makes demands of him, and he shall give [restitution] according to the judges’ [orders].

But if there is a fatality, you shall give a life for a life”

The sages tell us the fetus is not considered as “alive” as someone who has been born. But neither is it simply a mass of flesh without a soul. Indeed one of my favorite parables comes from the Babylonian Talmud. It teaches that an angel lives in the womb and watches over the embryo until it is time to be born. The angel teaches the unborn child everything there is to know about the mysteries of life and his or her soul. The angel also places a lighted candle at the head of the unborn infant, so he or she can see from one end of the world to the other. When the time comes for the child to be born, the angel puts her finger in front of her own mouth as if to say “shhh” and then presses the child’s upper lip so all the memories are forgotten. According to this story, the light touch on the child’s lip leaves a small indentation about the lip called a philtrum, which is something we all have.

The story of the angel is not meant to teach that there is another being hanging out inside the womb with a fetus. It’s teaching us that a fetus does has a soul.

Now before I close, there is one crucial point to make. Because of her last name, people believe her statements were made by a Jew.

Whoopi Goldberg is a stage name. Her birth name is Caryn Elaine Johnson – in other words, despite using the stage name Goldberg she isn’t, nor has she ever been, Jewish. Seeing her stage name, some people blame her stupidity on the Jews.

In the interest of tolerance and preventing AntiSemitism, I believe that Ms. Goldberg should remove the cultural appropriation and change her stage name.

The Jews are supposed to be the “chosen people,” but it’s time for Whoopi to choose someone else for a change. The Jews already have their fair share of famous embarrassments. Do you realize how hard it is for Jews to see Woody Allen walk around with his wife/daughter every Father’s Day? We get stuck with Senator stolen valor Richard Blumenthal (D-CT). We’re also stuck with Chuck Schumer, who would throw a relative off a cliff if it meant he could get one more vote. And don’t forget he wears his glasses like a 99-year-old schoolmarm. And Jerrold Nadler, who can forget when he went to McDonald’s and got stuck in one of the golden arches? They had to lure him out with an Oreo. We also have to take the blame for the obnoxious half of Geraldo Rivera and all of Bernie Sanders!

You see, Whoopi, the Jews are a unique nation. We are a nation that has stuck together despite the hatred that began with the ten plagues cast upon Egypt.

Via scripture, God taught Christians and Jews that he does not support Abortion.

Allahpudit at HotAir comes to the same conclusion but goes there in a totally different way, give it a read.