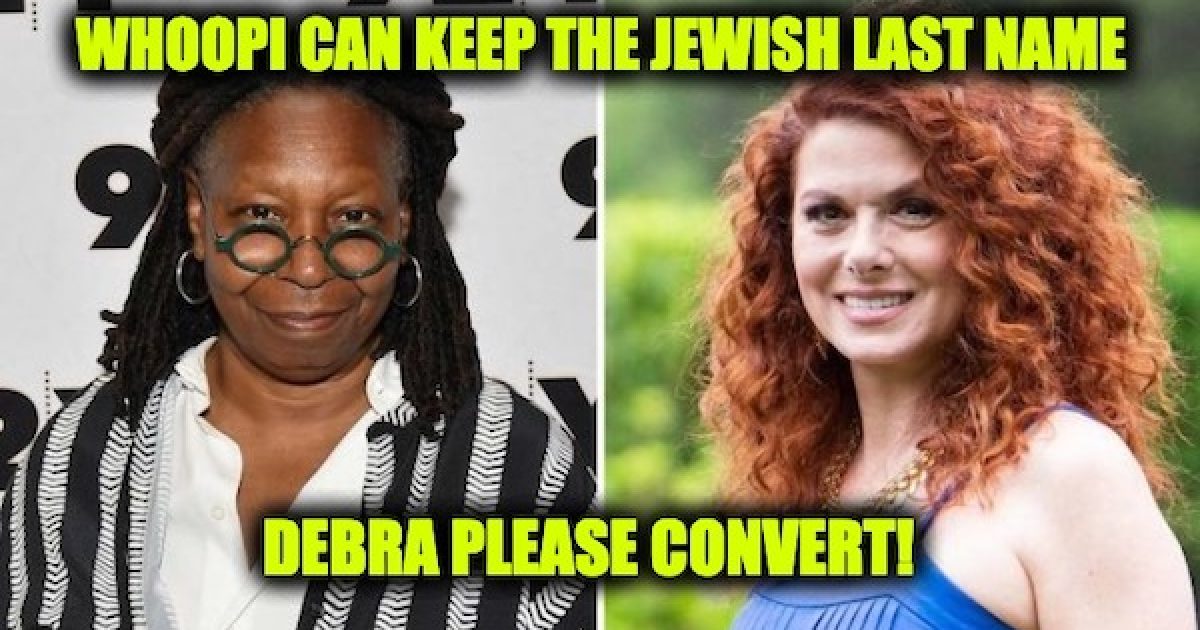 Whoopi Goldberg, all is forgiven. After you ripped Debra Messing for her McCarthy-like tweet about Trump supporters, I withdraw my request– you can keep the Jewish last name.

I requested that Whoopi go would go back to using her birth name Caryn Johnson,–at least the Johnson part. Because of her adopted last name Goldberg, some people may think she may be Jewish. There is enough Antisemitism in the world without people ascribing her sometimes stupid statements to Jews. But today she redeemed herself.

President Trump is scheduled to have a big-ticket Hollywood Fundraiser on Sept. 17 in Beverly Hills.  When the Hollywood Reporter wrote about the event, Debra Messing tweeted:

Please print a list of all attendees please. The public has a right to know. https://t.co/YV4UoxrPHI

Her Will and Grace co-star Eric McCormick added:

Hey, @THR, kindly report on everyone attending this event, so the rest of us can be clear about who we don’t wanna work with. Thx. https://t.co/7W3xPG3bI2

Essentially they were trying to blacklist Trump supporters.

The View’s first day back after labor day weekend, Whoopi Goldberg let them have it!

It started with Joy Behar joking that instead of a blacklist, they “should call it a white-list,” Sunny Hostin seemed to agree with Messing, then Goldberg went on the attack:

Listen, last time people did this, people ended up killing themselves. This is not a good idea, okay? Your idea of who you don’t want to work with is your personal business. Do not encourage people to print out lists because the next list that comes out, your name will be on and then people will be coming after you.

No one — nobody — we had something called a blacklist and a lot of really good people were accused of stuff. Nobody cared whether it was true or not. They were accused. And they lost their right to work. You don’t have the right in this country. People can vote for who they want to. That is one of the great rights of this country. You don’t have to like it, but we don’t — we don’t go after people because we don’t like who they voted for. We don’t go after them that way. We can talk about issues and stuff but we don’t print out lists, and I’m sure you guys misspoke when you said that because you — it sounded like a good idea. Think about it. Read about it. Remember what the blacklist actually meant to people, and don’t encourage anyone, anyone to do it!

As for my previous request, I am sad to learn that Debra Messing is Jewish.  But the interest of tolerance and preventing Anti-Semitism, I believe that Messing should convert to another faith. I don’t care which, she can even declare herself to be an atheist, but it makes me sad to know that someone Jewish, a faith whose practitioners have been blacklisted on and off for the last two thousand years would actually call for a blacklist.

Debra, We Jews are indeed supposed to be the “chosen people,” but why not choose someone else? The Jews already have our fair share of famous embarrassments. Do you realize how hard it is every Father’s Day for Jews to see Woody Allen walk around with his wife/daughter? Harvey Weinstein, Eric Schneiderman, and Al Frankin are all Jewish, and because of them, no women wants to be alone an elevator with a male Jew. We Jews also have to take the blame for people like Chuck Schumer who doesn’t even know how to wear glasses, Bernie Sanders who yells all the time, David Axelrod who helped to elect an anti-Semite to the oval twice, and the obnoxious half of Geraldo Rivera.

After today, I no longer want Whoopi to change her last name, she has done us proud–but Debra Messing—I will raise money to pay for the conversion. Don’t you get it, Debra??? For heaven’s sake, Ms. Messing haven’t the Jewish people suffered enough? Please go practice a different faith.

Below is a video of Whoopi’s anti-Messing rant.