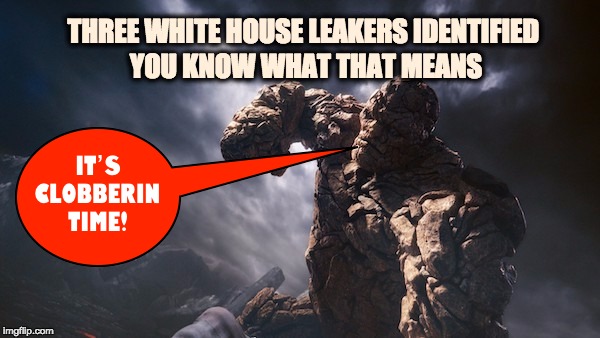 If these news reports are true, three White House employees are going to “get it” bad. Probably not from Ben Grimm-“The Thing” of Marvel’s Fantastic Four, but probably worse including the public humiliation of being a traitor to their country to score political points, and possibly even Jail

The Word on The Beltway has it that President Trump, or more likely someone in his staff has sniffed out the traitors, and there will be bloodshed in the White House any day now

“At least two separate news organizations are reporting that three distinct leakers have been identified at the White House and that President Donald Trump is expected to fire them when he returns from his first overseas trip.

“’CBS News has confirmed from two sources that three leakers of classified information at the White House have been identified and are expected to be fired,’ CBS News reported this week, adding, ‘Officials within the Trump White House believe leaks of Mr. Trump’s conversation with Russian Foreign Minister Sergey Lavrov are a “deliberate attempt” by officials who are holdovers from President Obama’s administration and are trying to damage the Trump presidency.’

SCOOP: Three White House staffers have been identified for leaking classified info. POTUS will fire ‘multiple people’ when he returns to DC.

Given the accused’s dubious connections to the former administration of Barack Obama, it comes as no surprise that President Trump would make an enemy of them.  Not only has Barack Obama himself been galavanting around the globe attempting to delegitimize the fairly elected President of the United States, he has also reportedly created a personal task force of Washington’s upper crust to “keep tabs” on Trump’s every move.
These three leakers have made the United States look bad in front of the world and possibly undercut President Trump’s initial attempts to do the buisness the people elected him to do.  They not only deserve the public humiliation of being led out of the White House in a perp walk, but perhaps they deserved to be clobbered by “The Thing” also.
b
Facebook Twitter Flipboard