Whining Chris Cuomo’s Demand: Give Me A New Time Slot 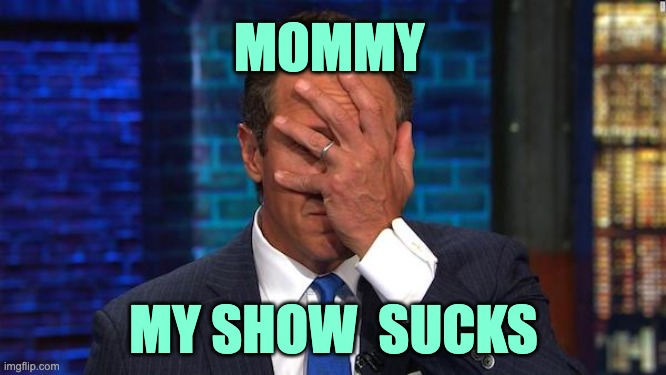 Poor Chris Cuomo. Soon after getting fired from CNN, he got hired by a cable network called NewsNation Cuomo is anchoring the 8pm slot, but he’s not very happy. Apparently, he’s not getting a big enough audience, but he has a solution. Acting like a five-year-old, Cuomo demands they move his show to Dan Abrams’ slot at 9pm.

“Cuomo is getting nasty about the ratings and he’s starting to blame everyone but himself,” an insider said. “He’s blaming the network, staff that he personally hired, his lead-in, the promo department and even the press department!”

“Cuomo” saw 147,000 viewers on its debut. Since then ratings have declined overall with the week of Oct 17 averaging 119,000 nightly viewers. Even Cuomo’s explosive interview with artist Kanye West, now known as Ye, drew just 129,000 viewers.

“Chris was going around screaming that Newsmax is beating him,” said the source, referring to the conservative network, which is a distant fourth behind Fox News, MSNBC and CNN.

“He’s a Cuomo. He doesn’t blame himself. His entire life he’s been told he’s special,” the source added. “No one is talking about his show.”

Think about how NewsNation feels. They hired Cuomo because he was a star at CNN for most of his time. They hoped that the former star would bring an audience with him. Ah, but not so fast, skippy. Why? Because he sucks.

Even Cuomo’s best-rated show — which garnered 214,000 viewers and aired at 9 p.m. after the Dr. Mehmet Oz-John Fetterman debate for Pennsylvania’s US Senate seat– drew criticism from media watchers.

“The show sucks,” said a TV exec, who spoke on the condition of anonymity. “Cuomo talked for 12 minutes straight. He did Fetterman debate analysis with no clips illustrating his points. It was just him ranting.”

The Daily Mail reports that Cuomo’s show wasn’t doing as bad as Cuomo thinks. “‘We have talked to numerous people in our newsroom and on Chris’ staff, and they are all very happy with the growth we’re seeing,’ a NewsNation rep said in response to the claims.”

The network claims the Cuomo story isn’t true. Of course, they wouldn’t pile on to the desired meal ticket. They can deal with Cuomo’s whining. After all, he is a star—an egotistic star.