While Kerry Was Pushing Negotiations, Palestinians Were Calling For Jerusalem To Be Soaked With Blood 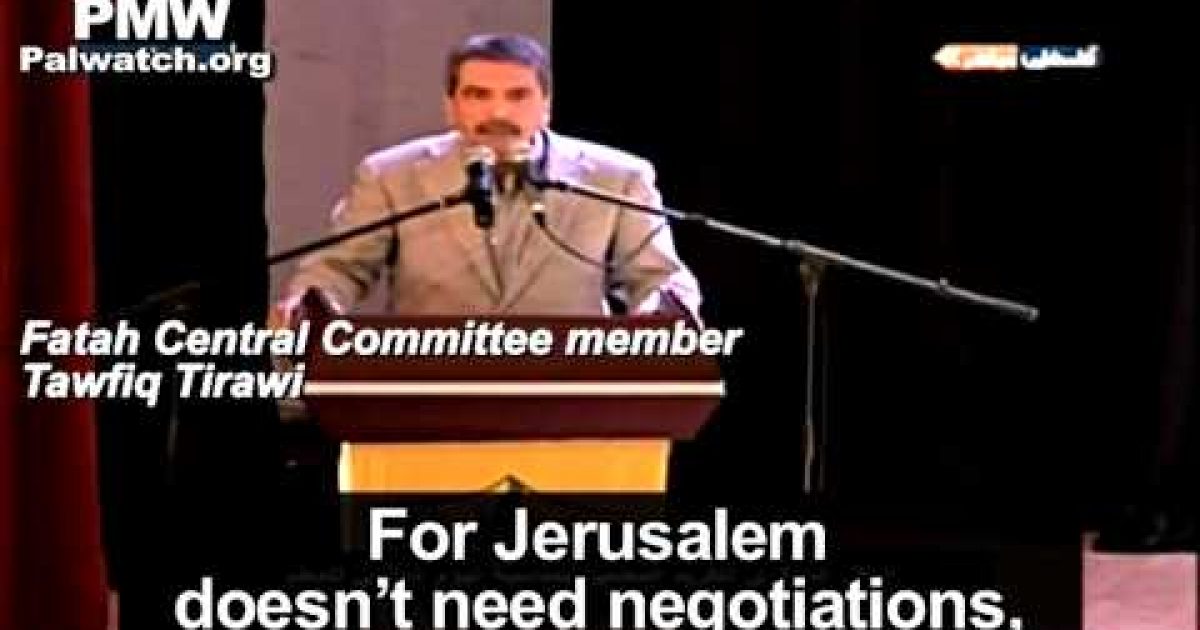 Yesterday, It was reported that a high level State Department figure (believed to be Negotiator and Clinton confidante Martin Indyk) bashed Israel’s conduct during the peace negotiations. In another example of the Obama administration’s one-sided criticism while that was going on, a senior member of the Fatah Party run by Palestinian President Abbas, was calling for Jerusalem to be soaked with blood and Israel to be destroyed.

Even at the height of the peace negotiations with Israel, in December 2013, member of the Fatah Central Committee,  Tawfiq Tirawi said that Palestinians were not committed to non-violence. Rather, he said that negotiations are just one option, and do not preclude use of the “rifle,” which the Palestinians have never abandoned.


Last week, Palestinian Media Watch reported that Tirawi had essentially proclaimed the end of the peace process, saying that “the two-state solution does not exist.” He further called for Israel’s destruction, asserting that “Palestine is Gaza… the West Bank… and Haifa, Jaffa, Acre,” meaning all of Israel is “Palestine.”

Going back a to mid-December, Tirawi made it clear that violence, killing and Martyrdom are the keys to Palestinian future success. “Not a centimeter of Jerusalem will be liberated unless every grain of Palestinian soil is soaked in the blood of its brave people. “

Tirawi made his comment at an event marking World Teachers’ Day in December 2013. “Negotiations will not bring Jerusalem back to us,” he continued, explaining that Palestinians before “have conducted negotiations, while not laying down the rifle”:

“I say, from a position of responsibility, not a centimeter of Jerusalem will be liberated unless every grain of Palestinian soil is soaked in the blood of its brave people. For Jerusalem doesn’t need negotiations, because negotiations will not bring Jerusalem back to us. What will bring back Jerusalem are the struggle and the resolve… We have conducted negotiations, while not laying down the rifle. It [the rifle] may be resting but we will not neglect our principles. We will rest the fighter’s rest, but each period has its method of struggle.” (video below)

The official PA newspaper has quoted Tirawi as stating

“the [Fatah] movement has not, and will not, lay down its weapons until the national goals of the Palestinians are achieved… [Fatah] has used a variety of means, including military struggle, popular struggle, diplomatic activity at the UN and negotiations, to achieve these goals.” [Al-Hayat Al-Jadida, Feb. 2, 2014]

Where’s Indyk on the constant incitement of hatred coming from the supposedly “moderate” Fatah?  Why is Kerry’s mouth shut on the hatred?

The truth is that the Palestinians don’t want peace just look at what they teach their people.

As for Indyk, word is he is quitting, but don’t be sad for him because if Hillary Clinton is the 45th President, Indyk will be bringing his anti-Israel attitude back to the beltway.