While our Congress has been tripping over their underwear trying to prevent oil Drilling, the world has seen one of the biggest transfer of wealth EVER. OUR money going to countries like Dubai. Take a look at the two pictures below, Dubai in 1990 and in 2005, funded by YOUR petrodollars.

SHARIA FINANCING …. or who sold out the country by not drilling

From s, “The biggest transfer of wealth has been taking place in the past few years to the Middle East. The Golden Rule states that those who have the gold, rule. Hence The Petrosheikdoms are calling the shots and the West is quaking in their boots. Yet the Dems must agree with this transfer of wealth since they have been blocking drilling, nuclear plants etc. Who made the strongest economy in the World vulnerable and what are McCain or Obama going to do about it? The media aren’t interested in asking important questions since they haven’t even acknowledged success in Iraq so they can run interference for Obama.

What kind of country will the U.S. be if there is a Democratic Supermajority. There’s 4 months left to make sure the USA remains strong and independent of the Petrsheikdoms and the UN……and it’s time McCain got his act together instead of running around like Columbo- he should be acting Presidential with a coherent visionary strategy. that’s what Obama is trying to do.”

NARROWING THE GULF Report on Business.com A new generation of Islamic banks, which adhere to the sharia prohibition on interest, is setting its sights on the West. As the wealth of Gulf countries swells, Western financial players – including some Canadian banks – are looking to tap these pools of capital (Read the whole thing here)

British businesswoman faces jail in Dubai after ‘having sex on the beach’: I’m terrified – it was a mistake’: The Pace of Growth Images of Dubai’s Huge growth 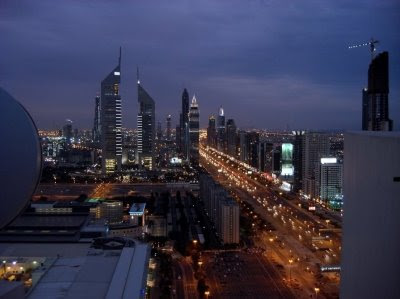