McCarthy: You Must Tell Public ‘What Would You Do If You’re Going To Get The Majority.’ So, Where Is The GOP Plan To Govern In 2023? 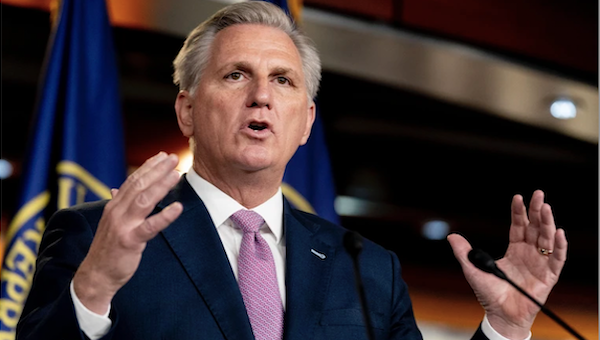 “I believe in an election, you should tell the American public what would you do if you’re going to get the majority, and we’ve been culminating that.”

That was House Minority Leader Kevin McCarthy (R-Calif.) in a Fox News interview on March 24 outlining the need to articulate priorities to govern should Congressional Republicans reclaim majorities in the House and/or Senate in the Nov. 2022 Congressional midterms — and that it must be done before the election.

That is absolutely correct. No political party is entitled to victory, and so, to win sustainable majorities, Republicans would still need to make the case to the American people, not merely outlining opposition to the incumbent party — but also telling how, specifically, they would govern.

At a press conference outlining the plan on March 23, McCarthy promised: “I believe by the end of the summer you’ll see the complete packages.”

With eight months to go before November and 14 months of the Biden administration already in the rear-view mirror, shouldn’t there be more meat on the bone? Why wait five or six months to tell the American people what’s up? In the Fox News interview, McCarthy certainly outlined nominal opposition to President Joe Biden and Congressional Democrats, declaring, “Our party is unified based on these Democrat policies that have created so much damage to America….”

Here, McCarthy does a decent job of noting a few of the critical issues that poll well with Republicans in the election: rampant inflation, energy security, border security, and restoring parental rights in education. But, it’s easy to talk about problems like inflation and the need for energy production when Americans have the highest gasoline prices in history. The real question is: What should be done about those problems?

In short, what will Republicans do, via legislation and oversight, to fight inflation? Or to make America energy independent? Or to secure the border? Specifically.

The real danger is that Republicans may think they can win the November midterms simply by coasting to victory, with little specifics. In midterm elections dating back to 1906 through 2018, the party that occupies the White House usually loses on average 31 seats in the House and about three seats in the Senate.

If that happens — and with low approval for President Biden and Republicans leading the generic ballot polls by about 3 points, there are reasons to think that’s the case — Republicans could easily reclaim Congress this year by default. But to what end? What will Republicans do next year if they win? Apparently, stay tuned for a few more months.

McCarthy is right about one thing. If you don’t have a plan before the election, you won’t have the mandate to govern after the election.