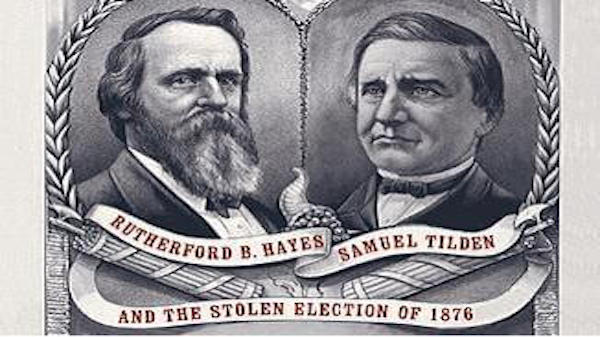 Democrats push for a congressional probe they hope will topple a Republican president they think was wrongly elected.  Then the investigation backfires on Democrats.  It’s happened before.

The intelligence investigation of potential collusion between the Donald Trump presidential campaign and the Russian government has taken a twist, and now former president Barack Obama’s national security adviser, Susan Rice, is in the crosshairs for her “unmasking” of individuals among the Trump campaign officials.  Meanwhile, a majority of Americans think Congress and the FBI should make ties between Hillary Clinton and Russia part of their investigation.

Democrats today insist that Trump’s 2016 win is illegitimate, much as they insisted that Rutherford B. Hayes’s victory wasn’t legitimate after the 1876 presidential race, when Democrat Samuel Tilden won the popular vote but lost a prolonged fight over the Electoral College.  The Democrats launched a probe that backfired badly, as I wrote about in Tainted by Suspicion: The Secret Deals and Electoral Chaos of Disputed Presidential Elections.

The special House investigative panel known as the Potter Committee was formed in hopes of embarrassing Hayes and maybe even driving him from office. This would only embolden the Tilden fans who felt their man was robbed. But instead of toppling Hayes, the bombshell from the Potter Committee was wrongdoing by Tilden supporters, chiefly his nephew.

The New York Tribune published coded telegrams which it had deciphered between Tilden’s nephew, Colonel William T. Pelton and other Democrats, including Manton Marble, editor of the New York World, a Democratic newspaper. The telegrams showed there were attempts to bribe election officials[.] … Republicans on the Potter Committee pushed the committee to investigate the very opposite of what the House Democratic majority wanted to probe – corruption by the Tilden campaign.

Before the congressional panel, Pelton and Smith Weed of South Carolina both confessed to their part in the bribery scandal. Pelton said his uncle was furious about the bribery attempt in November 1876. This would mean Tilden didn’t approve, but apparently knew. Marble didn’t admit guilt and said his telegrams were “danger signals” to warn against Republican corruption. Tilden denied knowledge of the matter and voluntarily testified to the congressional committee insisting he played no role in the matter.

Fast-forward to 2017.  Congress and the FBI are investigating a possible Team Trump-Russian connection. Perhaps no one should prejudge an investigation the way Obama did with his infamous “smidgen” comment on the IRS targeting scandal.  But so far, there’s no known proof of any ties.  Even former Obama administration officials James Clapper and Michael Morell said there is no evidence of any collusion.

Someone obtained and leaked Gen. Michael Flynn’s talk with the Russian ambassador, a leak that was likely a crime.  The Rice controversy continues to grow.  Rep. Pete King, R-N.Y., says the unmasked information resembles a private investigator’s divorce case file rather than any national security information.

Meanwhile, if the public gets its way, the investigation probe will expand into Hillary Clinton.  A Rasmussen poll finds that just 50 percent of likely voters support Congress investigating ties between the Trump campaign and Russia.  However, 52 percent believe that Bill and Hillary Clinton’s private dealings with Russia should be part of any FBI and congressional investigation of Trump and Russia.  As we know, there were links through the Clinton Foundation and the Uranium One deal.

If the current day investigation probe grows, and the facts lead to a different direction, as happened during the Potter Committee, things could spectacularly backfire once again on Democrats.

Fred Lucas is the author ofTainted by Suspicion: The Secret Deals and Electoral Chaos of Disputed Presidential Elections and is the White House correspondent for The Daily Signal.  [Note from Jeff: I read and enjoyed “Tainted by Suspicion.” I strongly recommend it!]