When the Clintons Pardoned Terrorists For Votes

Over a quarter of a century ago, FALN, a terrorist group trying to push independence for Puerto Rico exploded a bomb at One Police Plaza in New York. Members of this bloody terrorist group were responsible for 146 bombings the most gruesome of which was the 1975 Fraunces Tavern bombing in Lower Manhattan. Timed to go off during lunch time, the explosion killed 4 and injured another 60.

Eventually 16 of these terrorists were captured and sentenced to a term of thirty to sixty years …that was until August 1999 when Congress was on vacation and President Clinton Pardoned the terrorists quietly.

The Senator claims that she is the one with experience in national defense. I wonder how she would defend this? I also wonder who else she would pardon. Would she have pardoned Sadaam? If we “get” Bin Laden…would she set HIM free? Clearly if she wants to use her husband’s term in the White House as her experience she is very WEAK on terror.

It was nearly 10 p.m. on New Year’s Eve, 1982. Two officers on New York Police Department’s elite bomb squad rushed to headquarters at One Police Plaza, where minutes earlier an explosion had destroyed the entrance to the building. Lying amid the carnage was Police Officer Rocco Pascarella, his lower leg blasted off. “He was ripped up like someone took a box cutter and shredded his face,” remembered Detective Anthony Senft, one of the bomb-squad officers who answered the call 25 years ago. “We really didn’t even know that he was a uniformed man until we found his weapon, that’s how badly he was injured.” 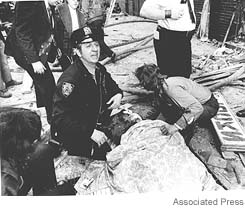 About 20 minutes later, Mr. Senft and his partner, Richard Pastorella, were blown 15 feet in the air as they knelt in protective gear to defuse another bomb. Detective Senft was blinded in one eye, his facial bones shattered, his hip severely fractured. Mr. Pastorella was blinded in both eyes and lost all the fingers of his right hand. A total of four bombs exploded in a single hour on that night, including at FBI headquarters in Manhattan and the federal courthouse in Brooklyn. The perpetrators were members of Armed Forces of National Liberation, FALN (the Spanish acronym), a clandestine terrorist group devoted to bringing about independence for Puerto Rico through violent means. Its members waged war on America with bombings, arson, kidnappings, prison escapes, threats and intimidation. The most gruesome attack was the 1975 Fraunces Tavern bombing in Lower Manhattan. Timed to go off during the lunch-hour rush, the explosion decapitated one of the four people killed and injured another 60. 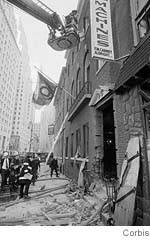