What Does Obama Know About ISIS That No Other World Leader Knows? 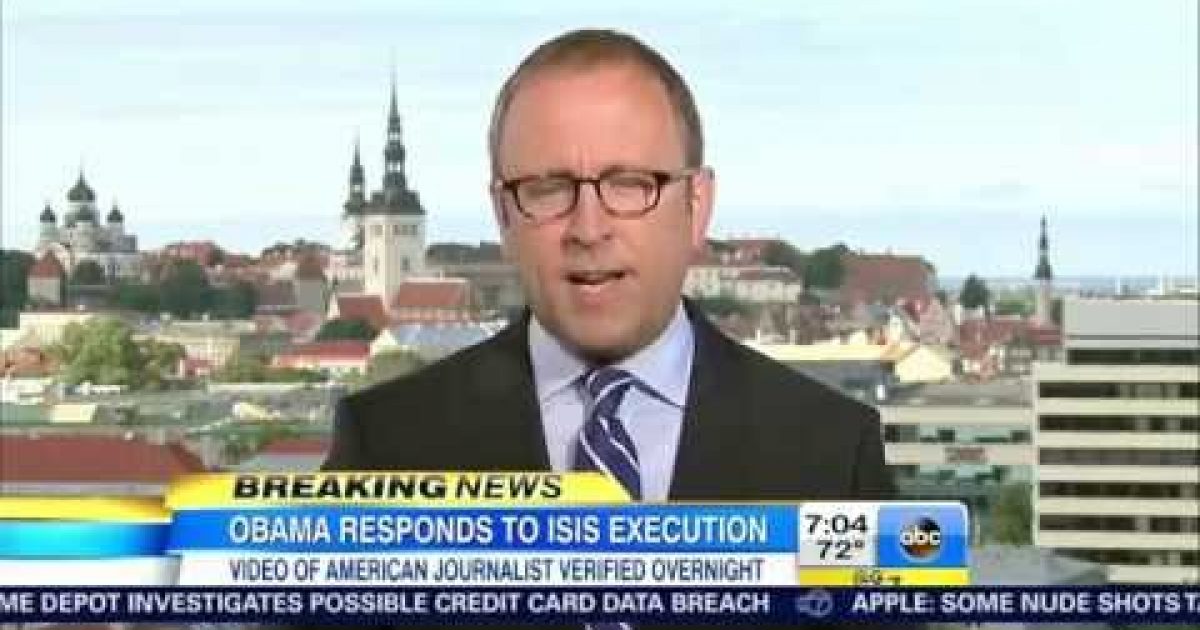 A video released by the terrorist group ISIS Tuesday shows the beheading of the American hostage Steven Sotloff. Sotloff, who free-lanced for Time and Foreign Policy magazines, had last been seen in Syria in August 2013 until he appeared in a video released online last month by the Islamic State group. That video showed the beheading of fellow American journalist James Foley.

Earlier this week British PM Cameron announced his recommendation for fighting the ISIS threat. Last week President Obama said he had no strategy to deal with ISIS in Syria.

All the above is part of a disturbing pattern this country has seen for the past six years.  This president loves to bloviate, loves to campaign, but hates to lead. But this is the United States of America, we are supposed to be the leader of the free world, our Commander-in-Chief is supposed to lead—not because of any humanitarian desire to protect people who want to be free (although that is important), but because by leading events instead of reacting to them our leaders get to protect Americans here in the states and across the world.

Earlier this week the king of Saudi Arabia warned that ISIS will reach Europe in one month and the U.S. one month after that. Yet still Obama has no plan.  What does he know? Why are many of our allies warning and reacting to ISIS and why is our president doing nothing?

Diane Feinstein (D-CA) suggested on Sunday that Obama had been too cautious in dealing with ISIS.

The Daily Beast’s National Security Reporter Eli Lake told Laura Ingraham on Tuesday that President Obama was the “last holdout” on taking aggressive action against ISIS “When you have people saying that [ISIS is a threat] for a solid week after the Foley snuff film, and then you have the president say…‘we don’t have a strategy yet’…that tells me, and Josh Rogan and I reported this, the president is the last holdout here.”

Despite what the Obama administration says in public, ISIS which is extremist even for extremists and has its own source of cash, is an existential threat to the United States and the Western World. Many wars have been fought because people of reason have ignored the stated objective of despots.  More than a few times ISIS leadership has said it wants to put a huge hurt on the United States.

The combination of the anger against ISIS in the Muslim States as well as the fear of ISIS in Europe, leaves President Obama with an option his predecessor never had forming a truly international alliance to fight terrorism, at least ISIS terrorism. While members of his administration have discussed this they have been chastened by Obama’s presidential comments.

Obama has two huge political problems when dealing with ISIS. Firstly he was elected on the basis of ending wars in Iraq and Afghanistan.  The second issue is his belief there is no way U.S. voters will tolerate any more American boots on the ground in Iraq and Syria (beyond the stated number of troops-about 1,000 there are probably Special Forces on the ground we are not being told about).

During his Wednesday press conference with the President of Estonia, President Obama said:

We know that if we are joined by the international community, we can continue to shrink ISIL’s sphere of influence, its effectiveness, its financing, its military capabilities to the point where it is a manageable problem.

And the question is going to be making sure we’ve got the right strategy but also making sure we’ve got the international will to do it. This is something that is a continuation of a problem we’ve seen certainly since 9/11, but before and it continues to metastasize in different ways. And what we’ve got to do is make sure that we are organizing the Arab world, the Middle East, the Muslim world, along with the international community to isolate this cancer.

Those two paragraphs illustrate the real problem.  It is not what Obama knows about ISIS that other people don’t it’s that Obama doesn’t understand terrorism and the threat to America. The international community doesn’t need to shrink ISIS nor does it need to isolate ISIS. The international community needs to crush ISIS. Using the president’s analogy if you simply isolate cancer it will grow back, the cancer of ISIS needs to be eradicated from the Earth.

Americans probably would support air and Special Forces support for a ground force comprised of our allies. But for it to happen, Obama must lead.

It’s time for our President to put together an alliance where other countries take the lead on the ground (its well past their turn) with support from the USAF and Special Forces. That would show the leadership he hasn’t displayed since he arrived in the White House 6 and a half years ago. However, if Obama cannot put together an alliance in that other nations are the lead boots on the ground, America needs to go it alone to destroy ISIS. In the end the first priority of a national government is protecting its citizens and unlike the 2003 invasion of Iraq, a war against ISIS would not be an optional war, they aren’t lying when they say they intend to go after this country. The only real question is will Obama finally realize it before there is a major terrorist attack in the United States?

When Scientific Journals Align Themselves With CHINA’s Propaganda . . . Should We STILL ‘Believe’ Them?
March 5th, 2021 Clash Daily