Christmas In Detroit: What A Crock!

Okay, they were alligators but who can tell the difference? 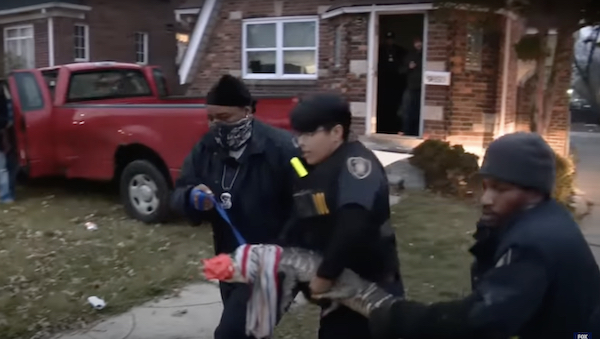 Evicting a family from their home is not pleasant. It’s even more unpleasant when tossing people out of their homes just before Christmas. On Dec.16, the Detroit police got a call to help serve an eviction notice. The tenant was furious about being tossed out of the rented home.

The bailiffs for the court that made the ruling were frightened there would be a violent reaction, so they called the cops to get some extra protection. Serving the eviction papers did not go well. There was no violence, but the tenants saw the bailiffs and cops coming, so they got into a moving vehicle and hightailed it away.

But when bailiffs entered the evicted tenants’ home, they discovered a large alligator and multiple small alligators inside.

“An alligator that’s not fed a proper diet, the entire snout and the mouth will be deformed,” Jovan Stacks, a federally licensed exhibitor and exotic animal store owner explained to Fox News.

Gators also need a lot of space and the right kind of environment with a proper temperature. Furthermore, they have to be handled very carefully, as even young alligators have sharp teeth and plenty of bite.

The escaped tenant had given the alligators all of that

I wonder if they were raising the alligators to make shoes.

Officials immediately called Detroit Animal Care and Control to give a hand removing the family of alligators with the three baby Gators inside a medium-sized tank filled with water.

Video from FOX 2 shows Animal Control lugging the tank with the three small alligators swimming around. Another set of workers are seen carrying the grown alligator outside with the reptile’s snout tied up to protect workers.

Now, the state of Michigan doesn’t prohibit owning alligators. The state only restricts the ownership of non-native animals (with some exceptions), but since gators are 100% homegrown American animals, Michigan residents are allowed to own them.

But it’s a different story when it comes to local laws. The City of Detroit doesn’t allow gators within city limits.

Below is the TV report about the alligator family: