Is Joe Biden In Charge? 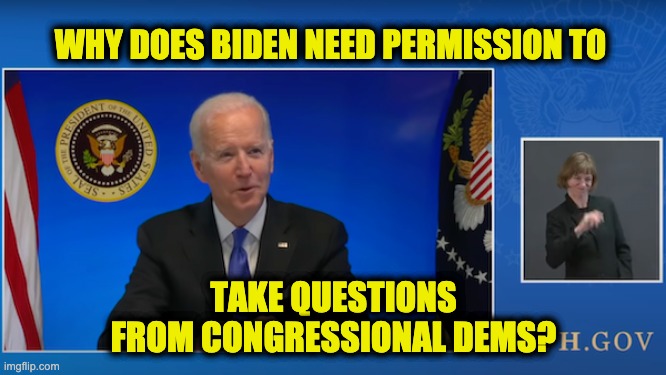 It’s enough to make one think President Dementia Joe Biden is being controlled by others in the Re-Bama administration. While participating in a virtual event with members of the House Democrat caucus, including House Speaker Nancy Pelosi, the White House mysteriously cut Biden’s video feed immediately after he said he would take questions from participants.  WH cuts Biden’s feed

“I’m happy to take questions if that’s what I’m supposed to do, Nance, whatever you want me to do,” he said.

BIDEN: "I'm happy to take questions if that's what I'm supposed to do…"

Breitbart News reported Biden has not held a solo press conference in the 42 days he has been president, breaking a 100-year record.

CNN’s Jake Tapper wrote on Twitter that Biden’s “15 most recent predecessors all held a formal solo press conference within 33 days of taking office.”

.@Kevinliptakcnn notes that an analysis of the past 100 years shows President Biden’s 15 most recent predecessors all held a formal solo press conference within 33 days of taking office. Biden has not and it’s day 42.

Last week, Press Secretary Jen Psaki said Biden would hold a press conference at some point, but it would not be this week. He probably hasn’t been given permission yet.

Kyle Olson also noted that Biden’s final comment “was deleted from the video of the event posted to the White House YouTube page.”

At the time of this writing, that video has only been watched 29,212 times, received 196 “likes” and well over 4,000 “dislikes.”  And, of course, comments are turned off.  But we’re supposed to believe he got over 80 million votes in the general election.  Make of that what you will.

It certainly doesn’t seem that way, does it?

Ok this is just so weird. https://t.co/rmMxtDqWZE

That’s one way to put it.

I can not believe that this is USA?

The president of the United States has to ask someone else if he is allowed to take questions and before he can finish asking they cut the feed. This is what real leadership looks like folks. 80 million people voted for this guy.

“Is it time for my pudding and Metamucil?”

Well that was awkward…

That’s another way to put it.

There’s plenty more, but you get the point.

This was, as one Twitter user correctly noted, a complete and utter embarrassment.  God help us.