Western Europe Is On The Edge of The Abyss 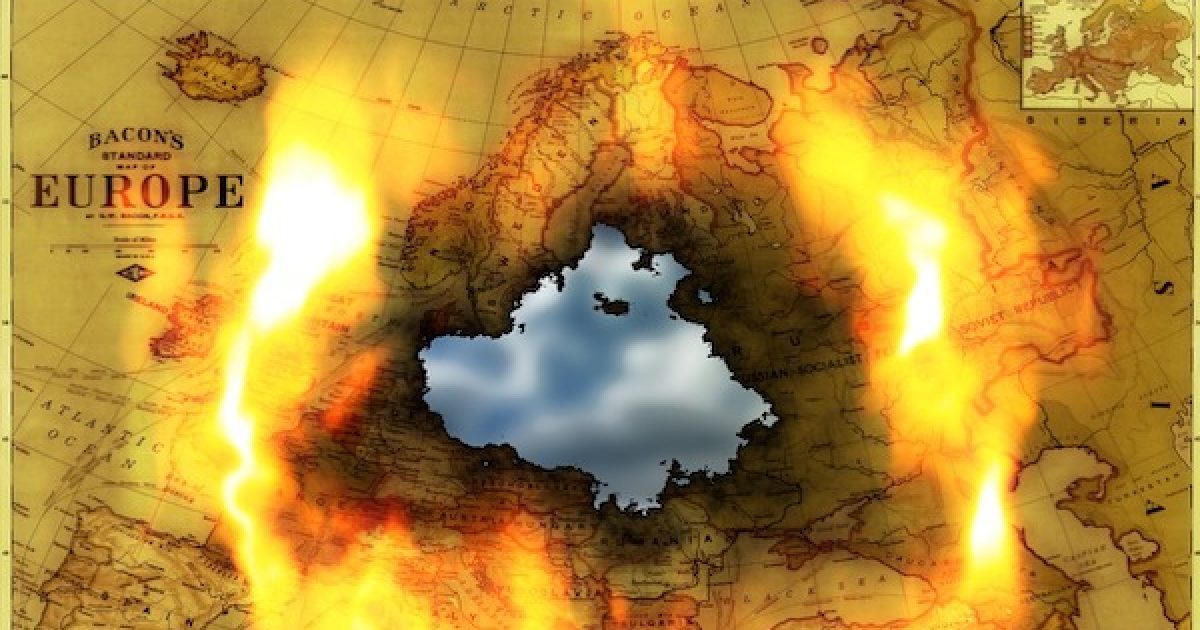 Something is happening in Western Europe that in some ways seems too big to describe.  Readers will be aware of the situation in France, where popular discontent about President Emanuel Macron’s policies has reached a critical point, and street demonstrations are turning violent.

But it’s more than that. There’s a sort of uncanny alignment going on, and at a time that could hardly be more crucial.  The impending event that makes it so crucial is getting very little coverage in the Western media.  Few in the West, outside of those who are despised for speaking unfashionably of their opposition to “globalism,” even understand its significance.

The event is the 12 December signing of the UN Global Compact on Migration, now just eight days away.  The U.S. will not be signing the compact, and other nations that stayed in the negotiations for it to the end are now starting to rethink it.  But dozens of nations, including those of Western Europe, remain committed.

Oddly enough, the truth of this would not have been as apparent without the “migrant caravan” drama in the Americas.  The overtly political organization of the caravans, and the frequently stated motive of demonstrating a “right” to cross the U.S. border – or other borders, for that matter, as when caravan members asserted the right to cross from Guatemala into Mexico – clarified things tremendously.

The contrast between the plight of Tijuana, where the local population has grown temporarily by over 6,000 people who arrived with no plans to feed or house themselves, and the firm stance of authorities at the U.S. border, has made visible the difference between protecting borders and giving them up

Giving up borders means being overrun by whoever wants to come in, with no way of establishing boundaries and standards.

It also means having no refuge from worsening conditions, as the citizens of Tijuana have been learning.  The French middle class has been in deteriorating conditions for some years, and the problem has been getting rapidly worse under Macron, in significant part because of his focus on “climate” regulations.  Macron’s onerous carbon tax on fuel is meant to suppress the very thing millions of French workers need to do to live like dignified, self-supporting human beings: drive vehicles.

When the protests in France ramped up some 10 days ago, it was clear from interviews with protesters that the vast majority of them were middle-class working people.  Reporters on the scene are finding that the peaceful protesters are still exactly those people.

The profile of those who took part in the violence is mixed. Some are organised ultra-right and ultra-left casseurs (agitators). But there was also a blurring of the lines. Organised anarchists/neo-fascists were joined by a minority of otherwise mostly peaceful gilets jaunes 5/11

The Rebel media reporter interviewed “Alain” in Paris (in the turtleneck and dark jacket, video above), and heard this from him:

The amorphous, hydra-headed nature of what’s going on makes it hard to put together thematic observations.  But a most important one is based on this very factor: the absence of a clear partisanship or top-down political organization behind the demonstrations.  In this regard, two things are in informative counterpoint.  I believe it is imperative to keep both in mind as this goes forward.

The first is that, where the ugly and destructive violence erupts, the legitimate popular protests are being hijacked by extremist groups.  Antifa and its local affiliates are one set of hijackers.

But, you will notice for every car on fire and every store looted, there were tags left by Anarchists. The regular people protesting as yellow jackets have nothing to do with the extremism. Arc de Triomphe with Antifa & anarchy graffiti. Videos to come out soon! pic.twitter.com/4l87J6fUtl

There are also “far-right” radicals, typically with neo-Nazi and anti-Semitic sentiments.  I will call the second group nativists, in part because they often invoke ancient cultural symbols and resurrect grievances and hatreds from centuries ago.

In that sense, there is an odd resonance with the extremely ancient divisions that have been reawakened in Mesopotamia and the Levant in the last 10-15 years.  The Catalan independence movement in Spain, with its roots going back centuries, is actually a latecomer in this regard.  It’s arresting to see Europeans invoking very old Viking and Celtic symbols as popular totems – and yet something more altogether to see Iraqis using online handles incorporating the syllables “Sumer,” for ancient Sumeria, which long preceded the Persia of Cyrus in the 6th century B.C., and the Arab-Islamic conquests that came more than a millennium later.

It isn’t a left-or-right thing.  It doesn’t neatly fit the creaking, bursting-at-the-seams categories we have been thinking in since “left” and “right” were defined by the political organization of late-monarchic France on the eve of the 1789 Revolution.  What’s going on in Europe doesn’t validate anyone’s modern-era political narrative.

The second thing, in counterpoint to this, is that the French police have very different postures with the peaceful protesters and the extremists.  The extremists throw rocks and sticks and pipes; they set fires and throw Molotov cocktails, and the police come at them with water cannons, truncheons, and tear gas. 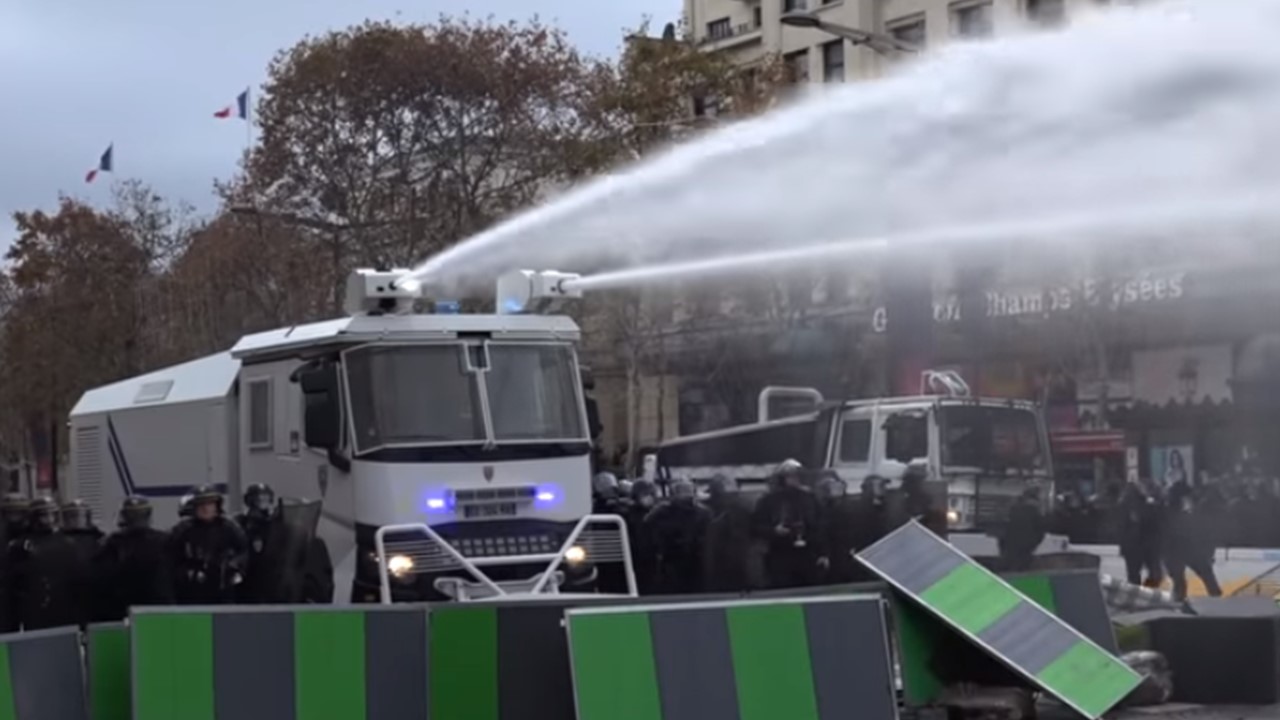 Where the protesters are working-class citizens who stand calmly carrying flags and don’t wear ski masks and bandannas over their faces, the police align themselves with their countrymen.

Ambulance drivers have lined up with their vehicles to show solidarity with the protesters as well.

French ambulance drivers join anti-Macron protests in show of unity against him pic.twitter.com/t70N5ktIYC

In the town of Cholet, in western France near Nantes, members of the fire brigade were caught on video turning their backs on local officials and silently walking out on them — another aspect of the same deepening division between government authorities and the working-class backbone of France. In Cholet, reporting indicated the firefighters were protesting force cuts that bite especially hard when extraordinary requirements arise, such as dealing with mass protests.  Like other Frenchmen and women, the fire brigades are having to live the distorted priorities that see France cutting the main public services governments are expected to provide, while raising taxes in fanciful efforts to address “climate change.”

This isn’t 1968.  This is no ordinary development.  Reportedly, 84% of French people in the latest poll support the protests, and their top concerns are the burdensome “climate” regulations, which are undermining every aspect of their economic lives, and the uncontrollable social impacts of mass migration into their country.  As Alain said to Rebel media in the video, they’ve simply had enough.

Notably, their country is seen as a refuge for others.  But for the French, there is no refuge from policies that are destroying their way of life – because the EU idea is designed to deny them any such shelter.  That is its very purpose.

In fact, the political idea to which the UN migration compact bears the most resemblance is the EU’s.  Both are about a systematic undoing of borders and denial of local discretion over boundaries and standards.

Yet the protests don’t articulate that clearly.  They are more of a cri de coeur against side effects than a forensic political manifesto against a misguided treatment regimen.  It’s as if no one has the political language now in which to articulate such a manifesto.  Nothing that’s real fits what we know how to talk about.

There is much more to say on this topic.  To say it in an organized way would take longer than I have tonight.  I don’t see this in Eastern Europe, nor necessarily in all of Western Europe.  But in the northwest from which the Western culture of today has most recently been incubated – Germany, France, the UK, and the British Isles, the Low Countries, Scandinavia – my eyes perceive a grand dérangement: a great disordering.  Among the national leaders, there is a strange mix of obsession and fecklessness, as if they can’t help themselves, and can’t stop doing things that don’t even make sense.

But the world is bigger than they are now.  That’s part of the reason we lack vocabulary and lexicon today: because we have been using theirs for so long.  It’s inconvenient to crash into this cognitive wall.  But it’s the only thing that will really demonstrate for us that there’s something on the other side.  Western Europe’s implosion is containable if we approach it wisely.  And for those who can see beyond the EU as an end-state, there will be an opportunity in the crumbling of shibboleths, as there always is.