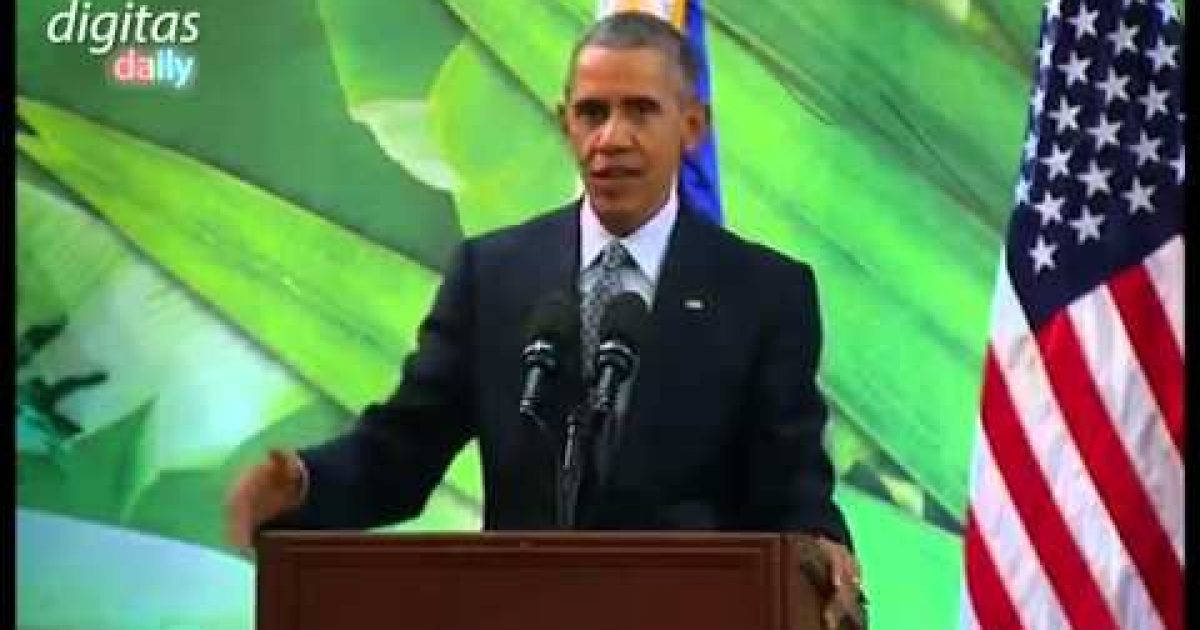 ” When people see a strong horse and a weak horse, by nature, they will like the strong horse.” -Osama Bin Laden, December 13, 2001

Holding a press conference in the Philippines Wednesday morning, President Obama immediately stepped into the role he does best, divider-in-chief. For the second time in three days instead of trying to calm an American population justifiably concerned that terrorists will strike here next, while on foreign soil this President took the opportunity to rebuke the people with whom he disagrees.

On Monday his primary target was the press, his major target on Wednesday was the GOP, “I cannot think of a more potent recruitment tool for ISIL than some of the rhetoric coming out of here in the course of this debate, it’s counterproductive and it needs to stop.”

Actually there is no more potent recruitment tool for ISIL than Barack Obama. Terrorists are like bullies, the only way to stop them is to confront them. With his tepid fight against terrorists Obama allows them to appear strong and successful to potential recruits. As Osama Bin Laden said in December of 2011, ” When people see a strong horse and a weak horse, by nature, they will like the strong horse.”  Under the Obama presidency, the United States has looked like the weak horse.  America has the best military in the world but his half-measures and restrictive rules of engagement has made us look weak and as Bin Laden said, by nature people will gravitate toward the strong horse, or in this case ISIL.

And trust me ISIL is watching us very closely.  The nascent ISIL saw how Obama cut and run out of Iraq snatching defeat out of the jaws of victory. They saw Obama set a red line in Syria, but when it was time to act, he withered. ISIL saw years of Obama scolding Israeli actions while condoning Palestinian terror, they even saw how Obama and Kerry capitulated to every demand that Iran had in the nuclear talks, and their plan to cut and run in Afghanistan.

The ISIL terrorists even heard John Kerry on Tuesday as he excused last January’s attack on Charlie Hebdo:

“There’s something different about what happened from Charlie Hebdo, and I think everybody would feel that. There was a sort of particularized focus and perhaps even a legitimacy in terms of — not a legitimacy, but a rationale that you could attach yourself to somehow and say, ‘OK, they’re really angry because of this and that,'” Kerry said during remarks at the U.S. Embassy in Paris.

“This Friday was absolutely indiscriminate. It wasn’t to aggrieve one particular sense of wrong. It was to terrorize people. It was to attack everything that we do stand for. That’s not an exaggeration,” Kerry added.

They even saw how just hours before they launched their attack on Paris, Obama said that ISIL was contained.

And the terrorists also see a president so afraid to offend them that he is willing relocate 10,000 Syrians into the U.S., even though they might include a few ISIL recruits in their midst. The president says there will be a carful vetting process—most experts say this is impossible.  The last time Obama said “trust me,” it was about keeping our insurance plans and doctors. That lie cost Americans money, this lie can cost Americans their lives.

According to Obama, if we crushed ISIL, another extremist group would just take its place:

And keep in mind that we have the finest military in the world and we have the finest military minds in the world, and I’ve been meeting with them intensively for years now, discussing these various options, and it is not just my view but the view of my closest military and civilian advisors that that would be a mistake — not because our military could not march into Mosul or Raqqa or Ramadi and temporarily clear out ISIL, but because we would see a repetition of what we’ve seen before, which is, if you do not have local populations that are committed to inclusive governance and who are pushing back against ideological extremes, that they resurface — unless we’re prepared to have a permanent occupation of these countries.

I would suggest that if we actually tried to crush ISIL we could do it easily, and if Obama truly cared about the Syrian refugees that is just what he would do, wipe them out.

Nobody is calling for a large permanent occupation force. But what Obama calls “what happened before,” was cutting and running in Iraq against he advice of his generals who recommended a small force to keep the peace just as we have in Korea (for the past 65 years).

President Obama also said in Manila, that the arguments to prevent refugees from be relocated in the U.S. “needs to stop because the world is watching.” He is correct the world is watching, especially the terrorist world. They see our presidential tower of Jell-o and believe they are defeating the “great Satan,” and if our weak horse leader continues this strategy they just might.

Note: The cartoon at the top of this post was created by 2x Pulitzer Prize winning cartoonist Michael Ramirez. If you don’t read him at Investor’s Business Daily or on Facebook you are doing yourself a great disservice!

Dominion on the hot seat!
February 25th, 2021 The Real Side With Joe Messina