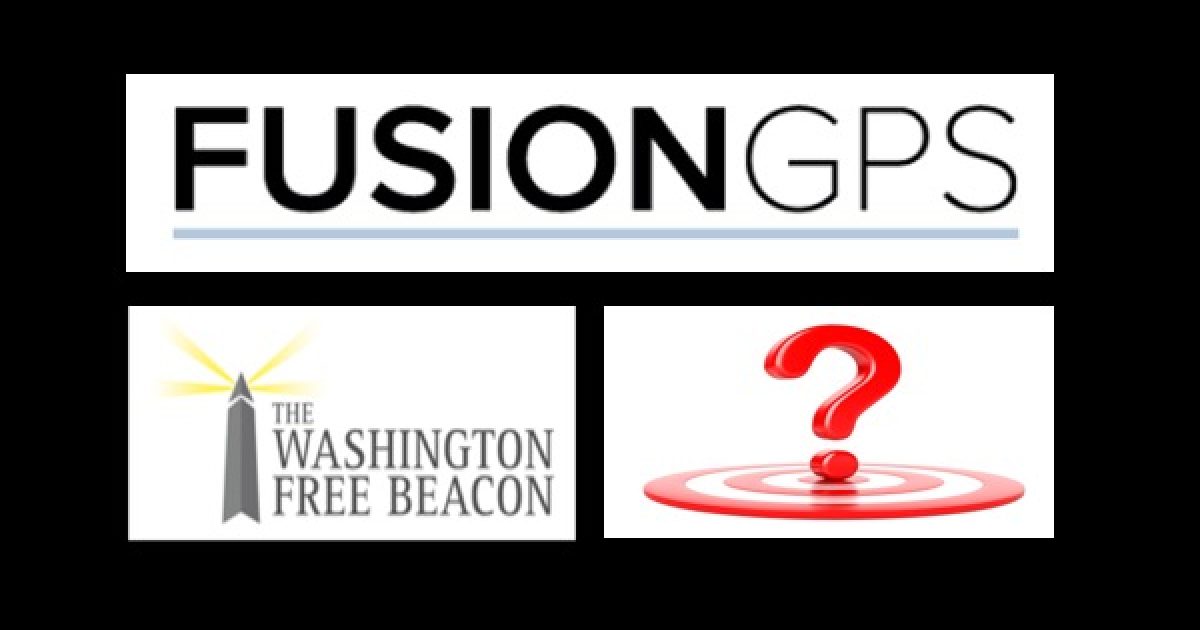 HOLY COW!! Byron York is reporting that the money that started Fusion GPS in its investigation of Donald Trump was not another GOP candidate, it was The Washington Free Beacon.  The Beacon has confirmed York’s report:

Lawyers for the conservative publication Washington Free Beacon informed the House Intelligence Committee Friday that the organization was the original funder for the anti-Trump opposition research project with Fusion GPS.

The Free Beacon funded the project from the fall of 2015 through the spring of 2016, whereupon it withdrew funding and the project was picked up by the Democratic National Committee and the Hillary Clinton campaign.

Within minutes of the Byron York story being published, Matthew Continetti Beacon’s Editor in Chief, and Michael Goldfarb its Chairman released the following statement:

Since its launch in February of 2012, the Washington Free Beacon has retained third-party firms to conduct research on many individuals and institutions of interest to us and our readers. In that capacity, during the 2016 election cycle we retained Fusion GPS to provide research on multiple candidates in the Republican presidential primary, just as we retained other firms to assist in our research into Hillary Clinton. All of the work that Fusion GPS provided to the Free Beacon was based on public sources, and none of the work product that the Free Beacon received appears in the Steele dossier. The Free Beacon had no knowledge of or connection to the Steele dossier, did not pay for the dossier, and never had contact with, knowledge of, or provided payment for any work performed by Christopher Steele. Nor did we have any knowledge of the relationship between Fusion GPS and the Democratic National Committee, Perkins Coie, and the Clinton campaign.

Representatives of the Free Beacon approached the House Intelligence Committee today and offered to answer what questions we can in their ongoing probe of Fusion GPS and the Steele dossier. But to be clear: We stand by our reporting, and we do not apologize for our methods. We consider it our duty to report verifiable information, not falsehoods or slander, and we believe that commitment has been well demonstrated by the quality of the journalism that we produce. The First Amendment guarantees our right to engage in news-gathering as we see fit, and we intend to continue doing just that as we have since the day we launched this project.

Two important questions about the Beacon report need to be answered

Secondly, notice the Beacon’s statement says multiple candidates, not all candidates. Why not all?

Perhaps it was a matter of money, or perhaps just as the DNC used a law firm to hire Fusion GPS so it couldn’t be tracked back to them…  a GOP candidate used the Washington Free Beacon, to hire Fusion GPS. While there is no evidence of this now…hey you never know. But keep in mind that one of the Free Beacon’s original backers was billionaire Paul Singer, a Rubio guy, and their Editor-In-Chief Matthew Continetti is married to the daughter of never-Trumper Bill Kristol.

Hoover,  one thing is very clear the investigation didn’t get salacious, and didn’t involve the Russians until the Beacon dropped out, and Hillary got involved.