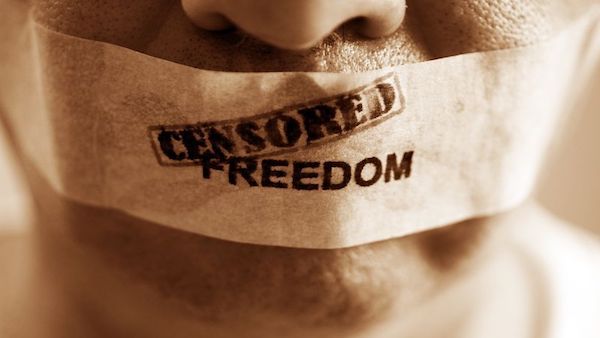 Presidential Candidate from her great state of diminished mental capacity, Senator Elizabeth Warren (D-MA) wants everyone with whom she disagrees just to shut up. Her latest campaign pledge is to criminalize Internet free speech, and jail people who she believes are posting “disinformation” on the Internet (probably anyone who isn’t a socialist). Sen Warren criminalizing free speech

Face it, she believes that free speech went out with TV show about Cowboys and I mean Cowboys and Native Americans…ah never mind.

Disinformation and online foreign interference erode our democracy, and Donald Trump has invited both. Anyone who seeks to challenge and defeat Donald Trump in the 2020 election must be fully prepared to take this on—and I've got a plan to do it. https://t.co/ZQ6B1AezBd

Sure, that’s the ticket. I voted for Trump because of a couple of Facebook ads. Well, that and the fact that his proposals far were superior, I believed he would fix the economy, that he wasn’t an anti-Semite like much of the Democratic Party. Additionally, I wouldn’t vote for Hillary Clinton if she gave me all the Clinton Foundation pay for play revenue AND all of Donald Trump’s money.

On her site Warren claims,

One expert estimated that during the 2016 election, there was a “one-to-one ratio of junk news to professional news” shared on Twitter. Despite Mark Zuckerberg’s insistence that it was “crazy” to think that false news had influenced the 2016 election’s outcome, the company later admitted that “malicious actors” had engaged in disinformation campaigns on the site leading up to the 2016 election, including using inauthentic accounts to promote false news stories and direct people toward stolen data. Although there has never been a full accounting of the IRA’s efforts, one report estimates that between 2015 and 2017, over 30 million Facebook and Instagram users shared the IRA’s content

She must really believe the American people are imbeciles.  They voted for Trump because of a few Facebook ads. Thirty million sounds like a lot, but let’s put that in perspective, during the past TV season my favorite show, NCIS averaged 11.4 million viewers each episode. So that 30 million audiences is less than the equivalent of three commercials in NCIS.

“I will push for new laws that impose tough civil and criminal penalties for knowingly disseminating this kind of information, which has the explicit purpose of undermining the basic right to vote,” Warren continued in a press release titled “fighting digital disinformation.”

Tech companies like Facebook, Twitter, and Google — as well as other platforms like TikTok and Reddit — have become essential to the ways Americans communicate and share information with each other. But the drive to maximize profit shapes how these companies design their platforms, prioritize the information users see, and police the use of their platforms. And often, that quest for profit contributes to the spread of disinformation.

For example, Facebook changed its policies to allow users to instantaneously share information to groups, a troubling way to quickly spread disinformation to millions of users.

Hey Pocahontas, who decides what is disinformation? When Obama was pushing Obamacare and conservatives wrote that the Americans wouldn’t be able to keep their doctors, Democrats said they were lying (and racist). But it was the progressive left that was lying.  When I throw out the satellite temperature data that shows the Earth hadn’t warmed since before the last time a president was impeached, I am telling the truth. Still, global warming crazies like you and Jane Fonda say I am spreading disinformation.  Who Decides? No one does because thankfully, this is America, and we have something called the Constitution, which socialists like you don’t care about. The first amendment to the Constitution says I have the right to free speech, and you can’t do a damned thing about it.

Folks proposals like this should scare the heck out of you. Elizabeth Warren is a mainstream Democrat. We cannot allow ourselves to vote our rights away. Proposals like her’s should make you want to work as hard as you can to make sure Donald Trump is re-elected in 2020, and the GOP keeps the Senate and regains the house. Otherwise, there may be restrictions on what you say, what you write, and even how you pray.