Isn’t There A ‘Climate Crisis’? Hypocrite Liz Warren Hides Behind Staffers After She Steps Out Of A Private Jet 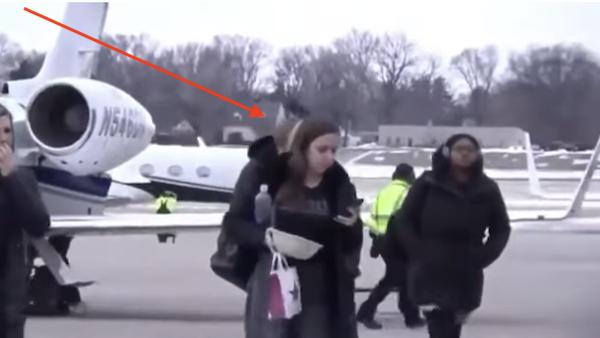 Pocahontas has an image problem, and this time it isn’t her fake native identity…She looks like a damned hypocrite. But hey, what else is new? Warren Hides behind staffers

Senator Elizabeth Warren(D-MA) has decided to court the far-left in her race to be the Democrat who loses to Donald Trump in November 2020.

With that comes a whole mess of issues that she has to tread carefully with or the rabid, leftist, censorious mob will descend on her with their torches and pitchforks. As we’ve seen, the “tolerant left” isn’t so tolerant if you happen to disagree with them on a particular issue.

One issue that has them all fired up is climate change, which was recently upgraded to the climate “crisis.” They’ve now paired this crisis with “eat the rich” socialism, and they are now inextricably tied.

According to her campaign website, Warren is going to take “bold, aggressive action” to battle the “climate crisis.”

This is a crisis. We need bold, aggressive action. We need a Green New Deal — and we need it now. Elizabeth is proud to be an original cosponsor of Senator Ed Markey and Rep. Alexandria Ocasio-Cortez’s Green New Deal resolution, which commits the United States to a ten-year mobilization to achieve domestic net-zero emissions by 2030. It provides the framework for an ambitious effort to transform our economy and save our planet.

But, like many other leftists that lecture about the climate “crisis” Sen. Warren isn’t going to change her lifestyle, she just demands that you change yours.

Taking a page out of Bernie’s book, she was zipping along hither and yon in a private jet. But when the camera was rolling, she hid behind her staff.

Liz can join the jet setting crowd, but heaven forbid you to continue to drive your car instead of taking public transit.

This is just like the Obamas’ who lecture about climate change but just bought a massive new house in Martha’s Vineyard.

Or Greta Thunberg’s boat trip that required multiple people to fly back and forth across the Atlantic so she could virtue signal.

And don’t forget Al Gore with his multiple houses, including the beachfront property that should already be underwater if his predictions had come to pass.

I don’t care how many  “carbon offsets” these smug, condescending leftists buy to atone for their sin of pollution, no one will take them seriously if they don’t start changing their own behavior before demanding that we change ours.