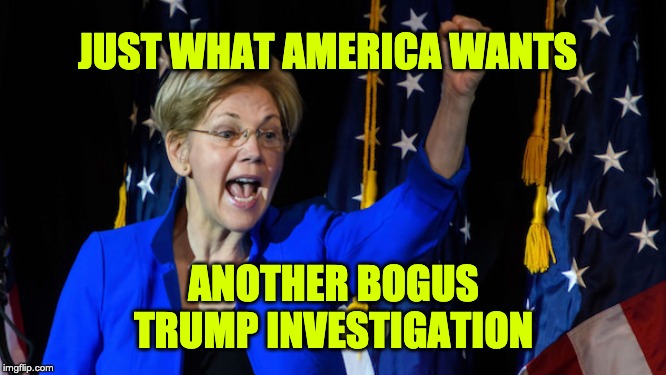 In today’s episode of ‘It’s Okay For Democrats but not Republicans,’ Elizabeth Warren vows that, should she become President, she will commission a DOJ task force to investigate corruption in the Trump administration. Sure that’s just what America wants—more bogus investigations of President Trump. We haven’t had one of those in a nanosecond.

Warren released the plan to investigate her political opponent on Tuesday, posting it to her campaign website.

Warren’s latest platform, titled “Restoring Integrity and Competence to Government after Trump,” begins by explaining that the President “has run the most corrupt administration in history.”

Did she blackout during the entire Obama administration?

“I will direct the Justice Department to establish a task force to investigate violations by Trump administration officials of federal bribery laws, insider trading laws, and other anti-corruption and public integrity laws,” her campaign promise reads.

Warren will “give that task force independent authority to pursue any substantiated criminal and civil violations.”

The House of Representatives couldn’t get bribery to stick in their impeachment sham but reality be damned, Warren is going to find it.

I will also direct the Justice Department to establish an independent task force to investigate violations of specific anti-corruption and public integrity laws during the Trump administration, with independent authority to pursue any substantiated violations.

Where is the outrage over the suggestion that an occupant of the White House would unleash her Department of Justice to investigate a political opponent?

Didn’t the media and Democrats themselves tell us these are the actions of a dictator?

“Donald Trump will leave behind a government that has been infected by corruption and incompetence, and his vindictive actions as president suggest that he is likely to do everything he can to undermine the next president,” Warren’s campaign writes. “We cannot assume that everything will be fine once Donald Trump leaves office.”

Hillary herself has engaged in “lock him up” chants since she lost the election, something she once claimed was an affront to truth, justice, and the American way.

Warren’s plan also includes a section in which she vows to remove all political appointees.

“Rooting out the corruption in our government starts with wiping the slate clean on political appointments,” she states.

“Donald Trump gave influential, high-ranking positions to his donors, friends, and political allies,” the plan reads. “I will ask for the resignations of all political appointees, including U.S. Attorneys, save only those positions necessary to preserve continuity and protect national security during the transition period.

Again, does anybody recall the vitriol directed at President Trump for firing Obama-appointed attorneys during the transition, something every new administration does? Remember U.S. attorney Preet Bharara becoming a grandstanding member of the resistance by refusing to resign?

The hypocrisy by Warren and the media who will either ignore her threat to investigate Trump or tout it as a refreshing new policy is truly breathtaking.