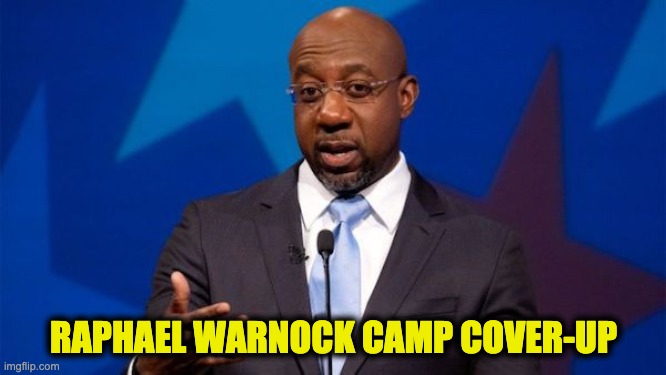 A man who, as a kid, attended a church camp run by Georgia Dem. Senate candidate Raphael Warnock says he was abused by the counselors there. And when the police tried to investigate abuse at the camp, Warnock tried to stop the cops from interviewing the camp’s counselors. Warnock camp child abuse

Anthony Washington, who was a 12-year-old boy when he attended Warnock’s Maryland Bible camp called “Camp Farthest Out,” says that the counselors that Warnock managed threw urine on him and mistreated him.

Washington’s account of the 2002 events provides the first direct insight into the alleged abuse and neglect that transpired at Camp Farthest Out, which Warnock oversaw as senior pastor of Maryland’s Douglas Memorial Community church, and raises new questions for the Democrat, who is currently vying for a Senate seat in Georgia.

Washington expressed surprise when he was told Warnock is currently running for U.S. Senate in Georgia. “I don’t think nobody like [Warnock] should be running for damn Senate nowhere, running a camp like that,” he told the Free Beacon. “He should not be running for government.”

Raphael Warnock is hoping to be elected as a U.S. Senator from Georgia, but not only is he far too radical of a leftist for Georgia, he’s even too radical for many blue states.

Anthony Washington, now 30, tells @FreeBeacon counselors at ⁦@ReverendWarnock⁩ camp tossed urine on him, forced him to sleep outside https://t.co/GiH5pG5fFD

Washington said when authorities were notified of the incidents and attempted to interview some of the camp staff, Warnock tried to interfere by preventing anyone from speaking with the police. The current Senate candidate was then taken away in handcuffs for seeking to obstruct justice though he was not charged. A 2002  report in the Baltimore Sun detailed the obstructing the police investigation part of the case.

The Revs. Raphael Gamalial Warnock, 33, and Mark Andre Wainwright, 30, of Douglas Memorial Community Church are accused in court documents of trying to prevent a state trooper from interviewing counselors at the church’s Camp Farthest Out in Eldersburg.

A state trooper assigned to the case said neither of the clergymen is a suspect in the child abuse investigation, but the officer would not describe the nature of the suspected abuse.

The ministers interrupted a police interview of a counselor Wednesday in a room at the camp and, after investigators moved the interview to a nearby picnic area, interfered again and subsequently tried to prevent a camper from directing police to another potential witness, according to charging documents.

“I’ve never encountered resistance like that at all,” said Trooper Diane Barry of the state police Child and Sexual Assault Unit in Westminster. Barry said the counselors consented to the interviews after being told they were free to go at any time and were not obligated to answer her questions.

Warnock has a long history of hating the military, hating white people, and hating the United States, and he has been seen espousing Marxist and racist views. Now he wants Georgia to send him to Washington D.C. and knock sitting Sen. Kelly Loeffler out of Georgia’s junior Senator’s seat. Georgians have the opportunity to send Warnock packing, though, in the coming Jan 5 runoff election.

But Warnock has a long history of being a hardcore, anti-American, radical, leftist, and anti-Semite. He has even praised Marxism.

An excerpt from his 2014 book, The Divided Mind

To be sure, the Marxist critique has much to teach the black church. Indeed, it has played an important role in the maturation of black theology as an intellectual discipline, deepened black theology’s apprehension of the interconnectivity of racial and class oppression and provided critical tools for a black church that has yet to awaken to a substantive third world consciousness. Yet, Gary Marx’s analysis is flawed by a paternalistic bias with respect to faith, culture and experience that trivializes black struggle against the obduracy of white capitalistic forces and lumps all forms of black denominational and sectarian identity together in an undifferentiated way that hardly makes it possible for those who are its subjects to see themselves in the discussion. [emphasis added]

In another interview, Warnock even attacked middle-class blacks for being too “consumeristic”:

In a 2014 interview with NPR, Warnock also suggested the black middle class in the post-civil rights era ought to consider the distribution of wealth — a theme of socialism. “The burgeoning black middle class … has too often given in to the kind of narcissism and mindless consumeristic impulses of America,” Warnock said, “without asking the hard questions about the distribution of wealth, about the broadening chasm between the haves and have nots.”

Some of his other “greatest hits” include:

A man with this type of background should never be in Congress, and that doesn’t even count his radical policy proposals to take away America’s freedoms.

NOTE: Ed Morrissey has more on this story at Hot Air. Click here and give it a read.