Is There A Fast Food War On Law Enforcement? 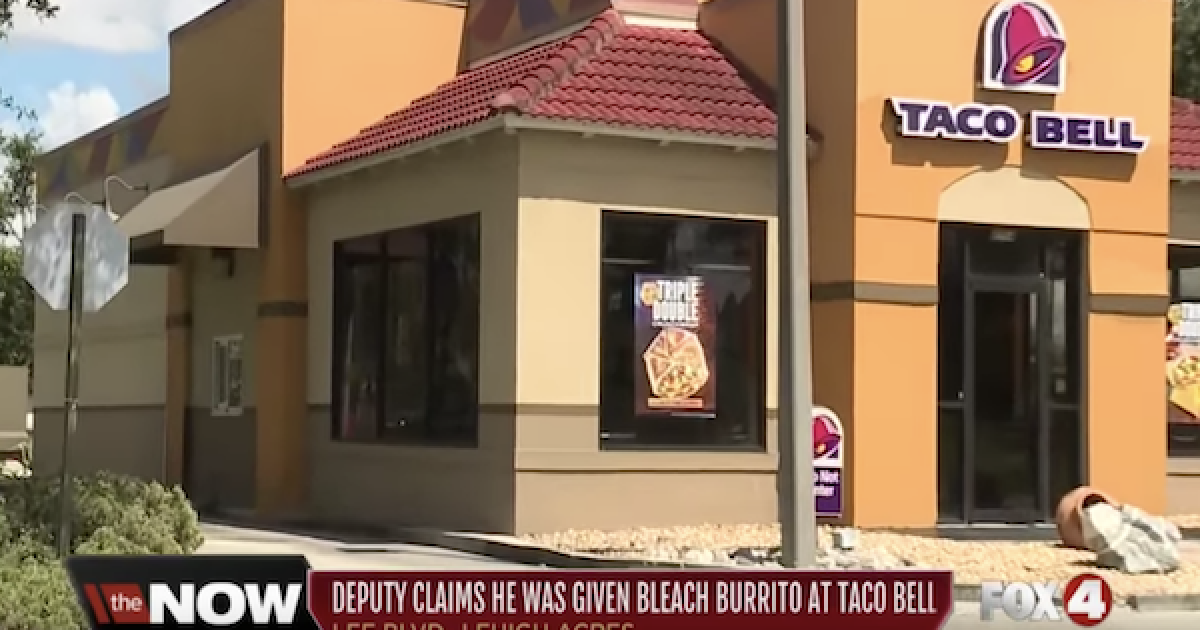 There is a story that President Trump is going to declare that Taco Bell is the best Mexican food in the United States and that upon hearing that, the Mexican government will immediately volunteer to pay for the wall to prevent that food from coming into their country. I have never eaten there, but some enjoy. It is my suspicion, however, that one law enforcement officer will NEVER  eat there again after tasting their new ingredient. A Taco Bell in Florida is under investigation after a police officer found his food poisoned, and recently there has been a rash of attacks on cops.

A Lee County Sheriff identified as Officer Brown alleges that he ordered food at a Lehigh Acres, Florida, Taco Bell but when he began eating he caught a foul odor from the food. Foul odor? Taco Bell food is not supposed to smell like juicy barbequed t-bones cooked medium-rare.

While in route to a call for service,  Brown began to eat the burritos and was shocked by what he found. Two of the burritos had a foul taste; and upon further inspection of the other burritos and the paper bag the burritos were wrapped in, he noticed that the bag smelled of bleach.

Brown reported that his tongue started to feel “numb and tingly” and notified law enforcement.

I am no expert, but I have never heard of Taco Bell’s hot sauce using bleach as an ingredient.

This was an attack on the people who put their lives on the line to protect our families and unacceptable.

Taco Bell corporate released a statement about the incident promising that the owner of the outlet will cooperate with any investigation:

We take food safety very seriously and are deeply appreciative of the men and women who serve and protect our communities and our country. The franchisee that owns and operates this Lehigh Acres restaurant is cooperating with local authorities and investigating this matter.

Police announced that an investigation is now underway to find out who poisoned the officer’s food.

The Taco Bell incident is far from the first time that police officers have found that their food had been poisoned. Just this month a Kansas McDonald’s worker was charged with a crime for spiking a police officer’s drink with peroxide-based cleaner.

The Allen County Sheriff’s Office deputy was given a drink tainted with cleaner while going through the Iola McDonald’s drive-through, Iola Police Chief Jared Warner said.

Trevor J. Hockaday, 22, was arrested in the 300 block of East Street on Sept. 12 as part of an ongoing police investigation into the case, Warner said. Hockaday was booked into jail on suspicion of aggravated battery against a law enforcement officer.

A similar incident occurred to an Indianapolis officer who reported that his food was poisoned by a McDonald’s worker.

Another food service worker went in a different direction with her hate for police by refusing to serve them at all.

A woman who owned a Detroit food truck recently told police that they were not welcome as customers. The left-wing owner of a Detroit, Michigan, food truck has announced that she will not serve any members of law enforcement because she says, she and her customers “do not feel safe around law enforcement agents.”

Rocky “in the head” Coronado, the owner of Rocky’s Road Brew, took to Facebook Friday to say she is “well within [her] rights to refuse service to law enforcement agents,” Fox News reported. Her post ended with the hashtags #blacklivesmatter and #refugeeswelcome.

“Yesterday, two people came by in a unmarked, black suburban with tinted windows both with bulletproof vests and badges,” she wrote. “I do not serve law enforcement (ICE, Homeland Security, DPD, etc) so I told em I was closed to not make a tense situation more so. They then circled back around with a lady (still with bulletproof vest and badge) getting out of her vehicle asking why I didn’t serve them.”

She didn’t serve people who protect puppies and kittens? That shows what kind of person Ms. Rocks in her head is.

Detroit Police Officers Association President Mark Diaz said the Facebook post was an example of the “anti-cop movement” that spread across the country (with help from Barack Obama).

“Unfortunately, we live in a society where the media has sensationalized a lot of the anti-cop movement,” he said. “It’s really just a small segment of society, but these squeaky wheels make the most noise, and they criticize everything police do.”

“But it’s their right if they choose not to serve police officers,” Diaz said. “It just shows that person’s mentality — but under no circumstances would we refuse service to them.”

Mr. Diaz is correct…well perhaps except for the last phrase. I do hope if Rocky ever needs help from law enforcement., they cop’s car would just happen to get three flat tires on the… way so they can’t make the call.

It’s hard to understand these idiots. Each and every day, people in law enforcement put their arses on the line to protect us, our families, and our “stuff.” They should be honored and thanked, not refused service or worse poisoned.

Parts of this post were originally seen at Godfather Politics