America’s Response To War Crimes In Ukraine—Then And Now 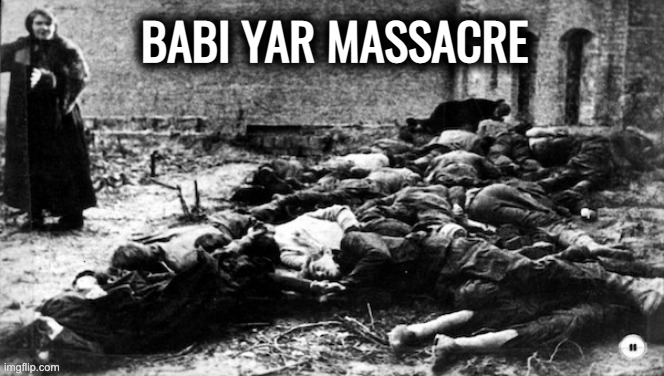 These are the descriptions of war crimes committed near Kyiv, which appear in the Ukrainian government’s recent indictment of eight Russian soldiers and mercenaries. But they just as quickly could have been taken from the reports about anti-Jewish atrocities in the same region that reached America 80 years ago this week.

Nazi death squads, known as the Einsatzgruppen, accompanied the German army as it advanced through Soviet Ukraine in the summer of 1941, terrorizing, torturing, and killing Jews in town after town. Today that first phase of the Nazi genocide, involving the slaughter of an estimated one million Jews, is known as the “Holocaust by bullets.”

Unlike today, when images of atrocities in Ukraine are broadcast around the world almost in real-time, news of the German massacres emerged only gradually. The first fragmentary reports about the mass killings were published by the Jewish Telegraphic Agency in early October 1941 and in the New York Times later that month. Similar reports appeared sporadically in the following months, including news of the slaughter of 52,000 Jews in the Babi Yar ravine, on the edge of Kyiv (then commonly spelled “Kiev”). 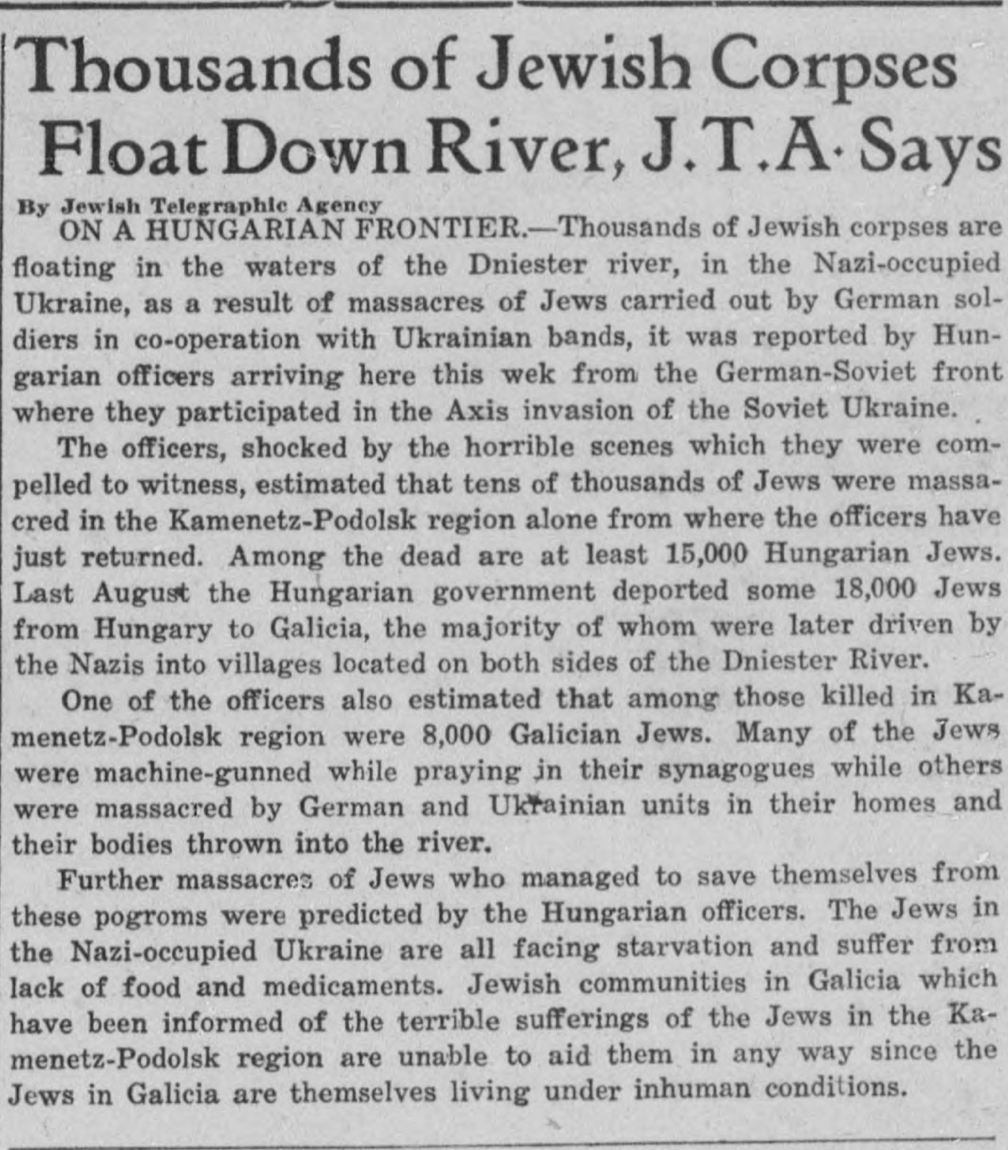 However, such news was difficult to confirm and sounded like the usual travails of war to many Americans. The turning point came in late May 1942—eighty years ago this week—when a courier from the Jewish Socialist Bund of Poland reached England with a shocking report. It began: “From the day the Russo-German war broke out, the Germans embarked on the physical extermination of the Jewish population on Polish soil.”

The Bund Report described how in villages throughout Poland, Ukraine, and Lithuania, German troops marched the Jewish residents to nearby forests or ravines and machine-gunned them into giant pits. The report stressed that the killings were not isolated outbursts but part of a systematic plan to “annihilate all the Jews in Europe,” town by town, country by country. The Bund also detailed the killing of Jews in the Chelmno camp in mobile death vans–trucks whose exhaust fumes were pumped back into the passenger cabin. Some 700,000 Jews had already been murdered, the Bund Report calculated. (The actual total was about two million by then.)

The response of the American press left much to be desired. The Chicago Tribune, for example, relegated the news to eleven lines on page 6, reporting vaguely that the Jews had perished as a result of “ill treatment” by the Germans. The Los Angeles Times gave it two paragraphs on page 3.

The coverage in the New York Times was critical because many other newspapers looked to the Times –as they still do– to decide if a particular story deserves attention. On June 27, the Times buried the Bund’s report at the end of a column of short news items from Europe. The following week, the Times published a news analysis claiming that the Germans “treat the Jews according to whether they are productive or nonproductive” and that the high mortality rate among “nonproductive” Jews was due to “starvation and ill treatment” rather than mass executions. The article also claimed that some reports of mass graves “appear to have been based on hearsay.”

New York Times publisher Arthur Hays Sulzberger, who was Jewish, feared that giving prominence to Jewish-related news would provoke antisemites to accuse the Times of promoting Jewish interests. The content and placement of articles related to Nazi atrocities against Jews reflected Sulzberger’s mindset.

The Roosevelt administration, for its part, actively tried to suppress news of the mass murder. A few weeks after the Bund Report arrived, officials of the U.S. Office of War Information decided to withhold reports about Nazi massacres of Jews because the news would lead to “hatred of all members of the races guilty of such actions” or provoke German retaliation against American POWs.

Roosevelt administration officials were worried that publicity about the slaughter would lead to demands that they do something about it. If the news got out, “the way will then be open for further pressure from interested groups for action which might affect the war effort,” R. Borden Reams, head of Jewish affairs in the State Department’s European Division, confided to his colleagues. “The plight of the unhappy peoples of Europe, including the Jews, can be alleviated only by winning the war,” he insisted.

Undersecretary of State Sumner Welles claimed that Jewish organizations’ calls for rescue actually were sponsored by “the German propaganda machine,” which was “using the misery” of the refugees to “create confusion and doubt within the United Nations [as the Allies were then known].”

Another senior State Department official in 1943 derided Jewish rescue activists as “emotionalists.” And when refugee advocate James G. McDonald complained to President Roosevelt about the suffering of European Jews who were trying to escape from the Nazis, the president dismissed it as “sob stuff.”

Fortunately, much has changed since the 1940s. Although there are still some isolationists who think that atrocities in Ukraine are none of America’s business, such thinking is to be found only among a small minority of the public. Unlike their predecessors during the Holocaust, today’s news media have kept the American people informed about Russian war crimes. And most important, the U.S. government has so far responded much more forcefully to Russian savagery in Ukraine than when atrocities were committed there by another aggressor 80 years ago.

Dr. Medoff is the founding director of The David S. Wyman Institute for Holocaust Studies and the author of more than 20 books about Jewish history and the Holocaust. His most recent book, The Jews Should Keep Quiet: Franklin D. Roosevelt, Rabbi Stephen S. Wise, and the Holocaust, was published by the Jewish Publication Society of America / University of Nebraska Press. And available on Amazon(as are his other books).