Wall Street executives who endured two years of Democratic party blame for everything from the financial crisis to health care costs to the collapse of the NY Mets have finally had it and are turning against their Democratic party tormentors by shifting campaign contributions to Republicans.

Long a reliable source of big contributions to Democratic party candidates, financial institutions iare dialing back donations and shunning the party who pushed through the ill advised reform reform bill. Financial executives say they were unfairly made the scape-goat for the great recession so that Democrats could deliver politically motivated reforms to angry voters — reforms that will now cost firms billions of dollars in revenue.

Last month the Washington Post, reported that Wall Street contributions to Democrats’ House and Senate campaign committees is down 65% from two years ago.

This fundraising free fall from the New York area has left Democrats with diminished resources to defend their House and Senate majorities in November’s midterm elections.

Although the Democratic Senatorial Campaign Committee and the Democratic Congressional Campaign Committee have seen just a 16 percent drop in overall donations compared with this stage of the 2008 campaign, party leaders are concerned about the loss of big-dollar donors. The two congressional committees have raised $49.5 million this election cycle from people giving $1,000 or more at a time, compared with $81.3 million at this point in the last election.

The  Center for Responsive Politics which monitors political donations published an analysis of second-quarter federal campaign finance data which reflects that financial firms and the people who work for them are increasingly donating their political cash to Republicans.

The Center’s preliminary study indicates that political action committees and individuals associated with the broad finance, insurance and real estate sector have given more money to federal-level Republican interests during every month since December. The gap continued to grow during that time, reaching its widest point in June.

Such a shift away from Democratic candidates — darlings of Wall Street interests for much of 2009 — coincides with Democrat-driven financial reform legislation that President Barack Obama signed last month.

Contribution trends toward Republicans is particularly pronounced in the securities and investment industry, the Center finds. 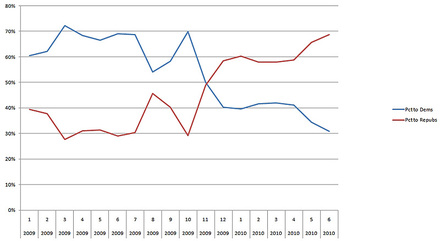 In March 2009 70% of the financial sectors political donations went to to the Democratic party.

In December 2009 donations to the GOP caught up and by June the Republicans were receiving 68% of  financial sector dollars, basically the two parties had flipped.

Individuals associated with these industries, such as company executives and middle managers, are the primary drivers of a Republican campaign donation shift, the Center’s research indicates.

Its not just the banking industry, individuals working in the insurance real estate sector have been contributing nearly two dollars to Republicans for every three dollars spent on federal-level candidates, party committees and leadership PACs.

Its hard to understand why Wall Street donations had ever favored the Democrats who traditionally have not been business friendly. But lets welcome them back from the dark side (but don’t let it happen again!).