Vox: American Revolution A ‘Mistake,’ July 4th Should Be A Day Of ‘Mourning’ 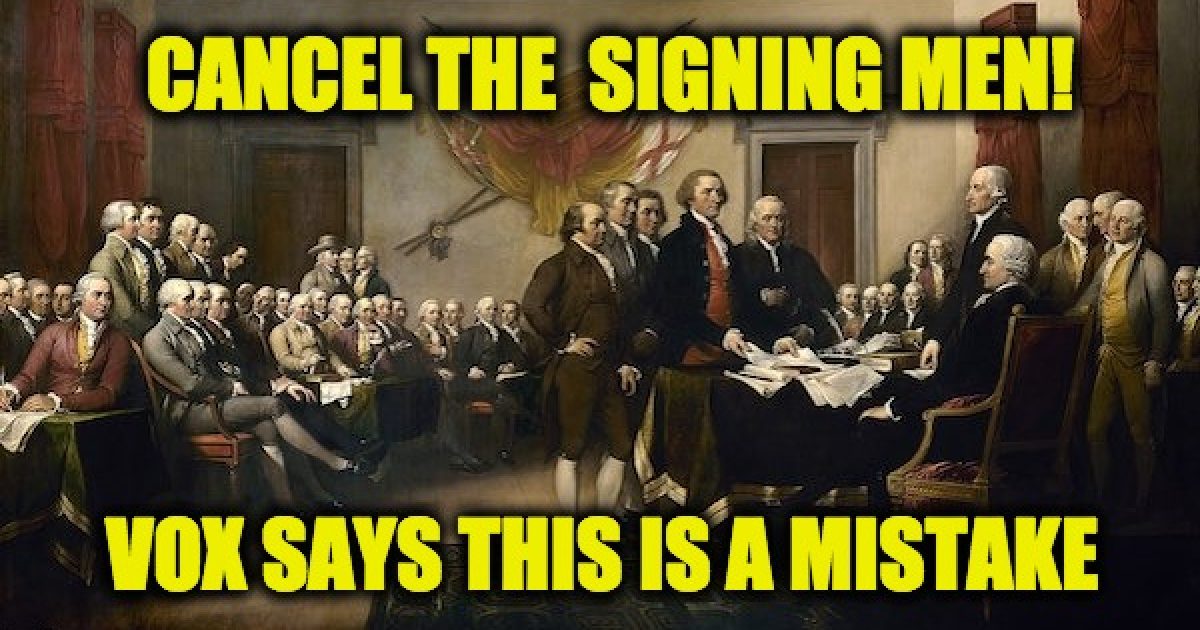 More and more, leftists are exposing themselves as being completely anti-American.  While patriots across the country celebrated our independence from Britain, the far-left Vox said the American revolution was a mistake, and July 4 should be a day of “mourning.”

According to Dylan Matthews writing for Vox:

This July 4, let’s not mince words: American independence in 1776 was a monumental mistake. We should be mourning the fact that we left the United Kingdom, not cheering it.

Of course, evaluating the wisdom of the American Revolution means dealing with counterfactuals. As any historian would tell you, this is a messy business. We obviously can’t be entirely sure how America would have fared if it had stayed in the British Empire longer, perhaps gaining independence a century or so later, along with Canada.

But I’m reasonably confident a world in which the revolution never happened would be better than the one we live in now, for three main reasons: Slavery would’ve been abolished earlier, American Indians would’ve faced rampant persecution but not the outright ethnic cleansing Andrew Jackson and other American leaders perpetrated, and America would have a parliamentary system of government that makes policymaking easier and lessens the risk of democratic collapse.

Just the abolition of slavery, he said, “is enough to make the case against the revolution.”

Slavery ended in Great Britain in 1833 about 30 years before here in America. I would submit that if America stayed in the British Empire, they would have ended slavery much later. The thirteen colonies were a huge cash cow for Great Britain, and they wouldn’t have done anything to tinker with the income.  Additionally, if there were no revolution, there would have been no 3/5ths compromise.  To the liberals, the 3/5th figure is an indication that our founding fathers were a bunch of racists who thought that the African Slaves were less than human. The truth is the 3/5ths compromise was invented by the northern states to reduce the political power of the slave states. Their reason was to prevent the slave states from getting too many congressmen and electoral votes lest they become too powerful. These powerful states would prevent Slavery from ever being abolished. Without the revolution, the colonies that accepted slavery would have been just as politically potent as the non-slave colonies. And perhaps even stronger when it came to sending money to the motherland.

In the US, activists wanting to put a price on carbon emissions spent years trying to put together a coalition to make it happen, mobilizing sympathetic businesses and philanthropists and attempting to make bipartisan coalition — and they still failed to pass cap and trade, after millions of dollars and man hours. In the UK, the Conservative government decided it wanted a carbon tax. So there was a carbon tax. Just like that. Passing big, necessary legislation — in this case, legislation that’s literally necessary to save the planet — is a whole lot easier with parliaments than with presidential systems.

And he claimed that having a king is much better than a president elected by the people:

Finally, we’d still likely be a monarchy, under the rule of Elizabeth II, and constitutional monarchy is the best system of government known to man. Generally speaking, in a parliamentary system, you need a head of state who is not the prime minister to serve as a disinterested arbiter when there are disputes about how to form a government — say, if the largest party should be allowed to form a minority government or if smaller parties should be allowed to form a coalition, to name a recent example from Canada. That head of state is usually a figurehead president elected by the parliament (Germany, Italy) or the people (Ireland, Finland), or a monarch. And monarchs are better.

Matthews misses two important points laid out by Thomas Jefferson in the Declaration of Independence:

We hold these truths to be self-evident, that all men are created equal, that they are endowed by their Creator with certain unalienable Rights, that among these are Life, Liberty and the pursuit of Happiness.–That to secure these rights, Governments are instituted among Men, deriving their just powers from the consent of the governed.

With those two sentences, for the first time ever, a government recognized that it didn’t have the power to grant (or take away)  basic rights from its citizens. Those rights came from God. It also established that unlike many of the monarchies in the world, governments got their powers from the people, not from God.

Reaction to Matthews on social media is pretty much what you’d expect.

Besides the obvious fallacy of assuming future historical events remain unaltered even if a seminal moment in human history were to be reversed, this is just plain dumb. Go back to Starbucks and take the rest of the day off.

Clickbait takes the place of history over at Vox, the website for leftists who need a few talking points in a vain effort to be taken seriously. https://t.co/xawsS2Pr4l

Vox trashing the War of Independence is exactly what I would expect of Vox on Independence Day. https://t.co/63rY66sxax

The Ds should run with this in the midterms.

You mean they’re not?

Those who opposed the idea of a free America were wrong 242 years ago, and they’re still wrong today. https://t.co/jF1HtYALzd