Position On Violent Crime Is Driving Trump’s Approval Up 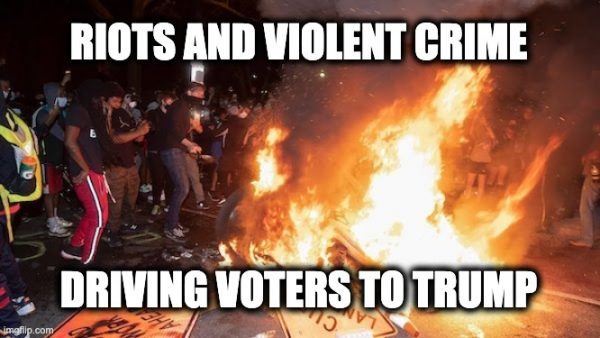 A recent poll from the Pew Research Center indicates violent crime is a significant issue amongst registered voters, heading into the 2020 presidential election. And a Zogby poll, reports record approval for the President, partially driven by the increase in violent crime and riots, particularly in Democratic Party-run cities. violent crime driving Trump’s approval

Even liberal TV anchors are beginning to feel the heat regarding the difference between President Trump and the Democrats on the issue of riots and violent crime:

CNN's Don Lemon is panicking over the disastrous impact that far-left riots are having on the Democrat Party. pic.twitter.com/lqZl7nuKQ6

A sizable 59 percent of voters in the survey indicate that violent crime, which President Trump has framed as happening in Democrat-controlled cities, is a “very important” factor in casting their ballots.

When broken down by party affiliation, the party of law and order becomes clear: 46 percent of Joe Biden supporters view violent crime as an essential factor. In comparison, 74 percent of President Trump’s backers feel the same.

Violent crime ranks just a shade behind the coronavirus pandemic in terms of importance, but well behind the economy, a category in which “the Republican Party holds a 9 percentage point edge over the Democrats.”

News that American voters are more concerned about violent crime than alleged racial inequality, economic inequality, and climate change will undoubtedly come as a surprise to the Democrats. The latter failed to address rioting in the streets at last week’s party convention.

Rioting is not the only violence making voters take another look at Trump. In many cities such as Chicago, L.A., Washington D.C., and New York, liberal mayors have put “handcuffs” on law enforcement, causing spikes in violent crimes.

“These days, Democrats are profoundly uncomfortable talking about the rise in violent crime in many major cities,” writes Josh Kraushaar of the National Journal. “It went unmentioned throughout the four days of their convention, even as it’s growing in importance for many voters.

"A new Pew survey found that violent crime is now the fifth-most important issue for votes, with 59% listing it as 'very important' to their vote. For context, it’s nearly as important to Americans as the coronavirus, which ranks fourth with 63%"https://t.co/25M33A3GVy

America’s disapproval of the violence is not a secret as one Wisconsin store owner asked the rioters if they were trying to get Trump re-elected.

“Are you trying to get Trump re-elected?” angry store worker in Kenosha, Wisconsin says after store windows shattered amid Jacob Blake protests. https://t.co/CjVP9Cni3M

A report in the Washington Examiner explains that the latest Zogby poll, the difference between the two parties on the riots is driving the President’s approval ratings up;

What’s more, his approval rating among minorities was solid and, in the case of African Americans, shockingly high. Zogby said 36% of blacks approve of the president, as do 37% of Hispanics and 35% of Asians.

Approval among independent voters is also up, to 44%. And “intriguingly,” said Zogby, 23% of Democrats approve of Trump.

Jonathan Zogby said the riots in cities such as Kenosha, Wisconsin, and Portland, Oregon, are pushing urban voters to Trump.

“Another factor continuing to help the president’s high approval rating is a rise in crime in our nation’s biggest cities. Unlike a year ago, the president is performing well with voters in large cities. It’s highly likely he is benefiting from the uptick in violence. His law-and-order message is resonating with urban voters at the moment,” said the analysis.

What does this all mean? First, it seems that the President’s law and order message is working and is slowly expanding his base. Secondly, all those naysayers who claim that Joe Biden has a huge lead in this race are wrong. This is a close election and will continue to be tight through election day only just 68 days away.

Things are fluid, and polls change daily, but as things stand now, President Trump will be elected to a second term. But people who support this President need to keep fighting because opinion change—quickly and often.