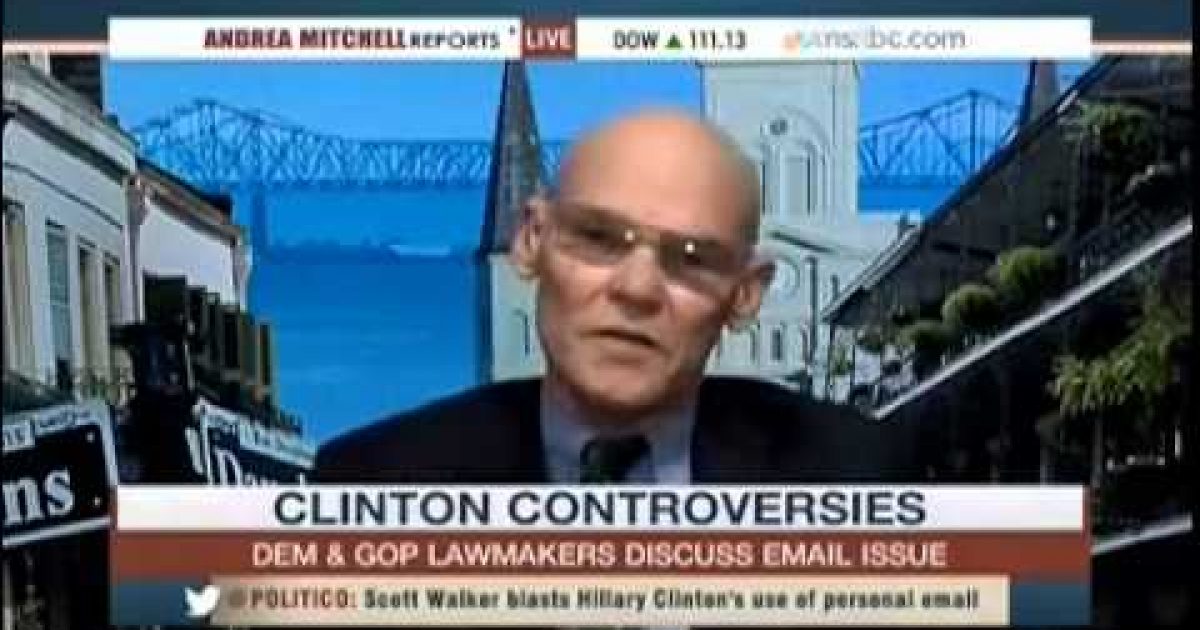 James Carville goes crazy protecting the Clintons, so crazy that liberal Andrea Mitchell tries to reign him in–Jim it’s time to switch to decaf. Below is the transcript and the video:

Mitchell: James Carville is a longtime political adviser to both Bill and Hillary Clinton, and joins me now. James, good to see you.

Mitchell: Good morning. Well, first of all, isn’t it time – isn’t it time for Hillary Clinton to speak out? If you were advising her, should she address these issues?

Carville: I wouldn’t – I don’t know – I don’t know exactly – it was legal. It wasn’t against regulations. Colin Powell and Jeb Bush did the same thing, but oh, my God, do you remember Whitewater? Do you remember filegate? Do you remember travelgate? Do you remember pardongate? Do you remember Benghazi? All of this is just the same cockamamie stuff that we go through. The [New York] Times gets something from some right-wing talking points, they print the story, they’ve got to walk the story back. And everybody – the chin-scratchers go, “Oh, my God. The story’s not right, but it says something larger about the Clintons.” This is never gonna end. We’ve lived with this for twenty years. We’ll live with it for the rest of the campaign. It’s all about nothing. That’s my view of the whole thing.

Mitchell: James, to take this back-

Mitchell: The Times did say that they could have put more detail in.

Mitchell: Their public editor this weekend…

Mitchell: …said that the story was essentially correct.

Carville: They – it was not illegal – just so you know, The Times took right-wing talking points, wrote a story about mobile weapons lab they got from Dick Cheney, who cited the story on Meet the Press that morning-

Carville: And they’ve got to stop – I’m just making a larger point. They need to check out the stories before they take stuff-

Mitchell: The larger point is the Clintons. The fact is that Dianne Feinstein is not some Republican talking point. Dianne Feinstein said that she has to speak to this. That she has to address it. Others have, in fact, made that point off-camera. Democrats are saying to, you know, every political reporter in town…

Mitchell: …that this should at least be addressed. Why-

Carville: This is the same thing – Andrea, I’ve lived through this. What happened to filegate? What happened to travelgate? What happened to pardongate? What happened to Benghazi? You can go find a Democrat that says anything. My point is, this was legal, in accordance with regulations. Colin Powell and Jeb Bush did the same thing. So I just don’t see – I’m not going to – I don’t see the deal here. But next week there’ll be a different story. “There’s a story about the foundation taking money from Middle East governments.” Why doesn’t somebody come down and see how much New Orleans universities after Katrina took from Middle East governments. Well, we’re not going to do that because there’s one set of rules for the Clintons and there’s one for everybody else.

Carville: And I’m not playing along with the game.

Mitchell: When Hillary Clinton was confirmed, she accepted a certain set of rules that there would not be foreign contributions while she was secretary of state. And as it turns out, as they’ve now acknowledged, she didn’t go along with the ethics waiver that she had accepted, number one. Number two – I mean, let’s take that. What about the foreign contributions?

Carville: You know what? People have to decide. I think it was the government of Algeria that gave money to the Clinton/Bush initiative for earthquake aid in Haiti. Take it and run with it as far as you want. Oh, my god, let’s all get out of breath here. Let’s go to a dinner party and scratch our chins and say, “Oh, it’s not really that bad, but it says something larger about the Clintons.” And let’s say that a certain standard applies to Colin Powell and Jeb Bush. Another standard applies to the Clintons.

Carville: So was Hillary Clinton.

Mitchell: No, there was a rule –

Carville: So was Hillary Clinton. There was no law against it.

Mitchell: No, there was an advisory that started in 2009. And no one’s saying it’s – I’m not saying it’s a law. I’m basing this on my reporting on the information from covering the State Department.

Mitchell: There was an advisory. The State Department did request that everything be held and then turned over contemporaneously, not after several years.

Carville: Right, she turned over – you agree that it was totally legal?

Carville: Say, “James, it was legal, there was no illegality involved here.”

Carville: Okay, that’s fine. Now we’ve established that. Alright, the emails are turned over. Colin Powell, same thing. Jeb Bush, the same thing. The State Department advisory, when it took place, let’s look and see. I’m sure this will all be done. The point here, there’s just not a lot here. Just like there was nothing to all these previous scandals. And I am going to point this out continuously that the press, you know, which took right-wing talking points to start a war, continues to take these talking points, and they continue to have to clarify it, and that’s just what we’re going to live with between now and November of 2016.

Mitchell: It’s interesting to hear you defending Dick Cheney from the right-wing press or-

Carville: I’m not defending him. I’m saying he took Times – he leaked the information to The Times then went on and cited the story as a rationale for the most disastrous foreign policy decision in modern American history.

Mitchell: Sorry, I lost the thread of the argument there because it did seem to have nothing to do with Hillary Clinton.

Carville: Of course it does. Where do you think the email story came from? It came from Republican staffers. That’s where it came from.

Mitchell: I don’t know the source of The New York Times. That’s not the issue.

Carville: Okay, I do.

Mitchell: The issue is whether or not, at this stage, as a political strategist, as a former adviser to the Clintons, if not a current one, why not address it rather than let this dominate the rollout of her campaign?

Carville: I think, in effect, she will probably address it, but my own personal view, they’ll just say, “Well, you didn’t address it enough. Or here’s another thing.” It’ll end up the same way that Whitewater ended up, that I lived through, the same thing that all these fake made-up quote, “scandals” were. And they’ll just say, “Well, there’s more.” And then they’ll go to some Democrat and they’ll say this. “Well, you’ve got to do this.” And it’s never going to be whatever.

So maybe this archival legal email thing needs to be addressed. I’m sure at some point she’ll say something about it. But the next day there’ll be something else, and the next day there’ll be something else. It will never change. I understand that. My own point is, if I were a member of the press and I realized that right-wing talking points helped get us into a war, I would probably rethink the way I get my information.

Mitchell: Isn’t this a distraction that she does not need and that the Democrats are very concerned about?

Carville: Right. First of all, there’s always going to be a distraction in Clinton-land. There never is a time when there’s not. I’ve lived through this for twenty years. Don’t you think that next week there’ll be some other thing that they’ll crop up? And then they’ll take it and they’ll run with it. It’s not gonna ever change. That’s my point I’m trying to make, Andrea. We’ll be on next week, we’ll be talking about, quote, “the new distraction.” And, of course, it’ll all be, as we find out, there’s going to be much less there than meets the eye. And we’ll go out and we’ll find another Democrat that’ll say something, and we’ll come in and we’ll do something else.

Mitchell: But James, many people thought – many observers thought that the Benghazi Select Committee was floundering.

Carville: It is floundering.

Mitchell: And doesn’t this give new ammunition to them?

Carville: Well, of course it does not. They’ve had seven – how many times are we gonna go through this, seven congressional hearings have all found the same thing. So what are they going to do? What do you think, there’s an email in there that after all of these people have investigated this, but we’ve all got to be out of breath and we’ve got to treat this like it’s something different.

Carville: Ask anybody that she has to turn over whatever it is. Are you saying that she’s a crook? Because if she does not turn over relevant stuff, that’s against the law. So is that what we’re really going to say here. I don’t think we really want to say that. And I think that if we’ve investigated something for seven times, seven different congressional committees, all of the out of breath, all of the coverage, all of the worried Democrats, all of the other stuff that you hear on every one of these things, it is always the same, Andrea. My point to you, it’s never going to change. We go through the same thing twenty times. And this doesn’t give any life to anything. We know what happened at Benghazi. This is not going to change anything. It just gives – it just gives people a reason to get out of breath about a lot of cockamamie, goofy stuff.

Hillary Brings RussiaGate Back from the Dead to Fire Parting Shots at Trump
January 19th, 2021 The Lid