Black Dem. Goes Off On MSNBC Host Who Asked If He’s Being Paid to Support Trump 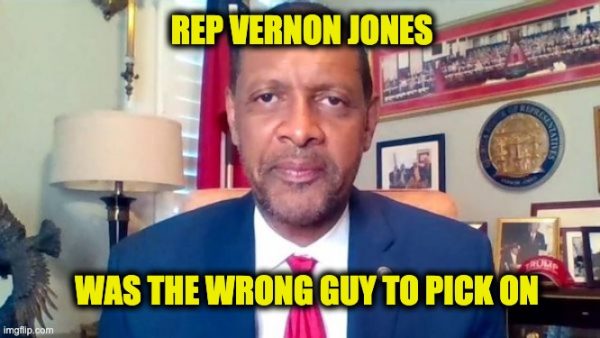 Georgia State Representative Vernon Jones fired back hard after MSNBC host Craig Melvin suggested he might be getting paid to support President Trump. Jones caused a stir in back in April when despite the fact he was a Democrat, he publicly announced his support for the President because of all the work Trump had done for the African-American community.

Jones, now a member of the Black Voices for Trump Advisory Board, was questioned about his backing of the President.

“Are you a paid campaign surrogate? Are you being compensated?” asked Melvin. Because it’s impossible to be a Democrat or even more so, black, and support this President without some ulterior motive. At least that’s how MSNBC sees it.

"Are you being compensated [by the Trump campaign]?"

Vernon Jones fired back: "You only ask me that because I don't fit your narrative." pic.twitter.com/9UaNLHeVme

Clearly haven taken offense to the suggestion that he was being paid to support President Trump, Jones didn’t hold back in his response.

Indeed, Vernon Jones had felt so strongly about President Trump he first resigned from his position as a State Representative, because his entire family was harassed, then changed his mind, refusing to be bullied.

Yesterday, I announced my intentions to resign from my office. But shortly thereafter, the outpour of support I received was too great for me to ignore.

I will not allow the Democrats to bully me into submission. I will not let them win.

I will NOT resign. #MAGA pic.twitter.com/gR2MsU5Rb3

Vernon Jones has principles, but principles are not something members of the mainstream media are particularly well-versed in.

Craig Melvin insisted he hadn’t asked the question because Jones happens to be black, but the Georgia lawmaker wasn’t having it.

You only ask me that because I don’t fit your narrative. I don’t want anything from this president. It’s what I can do for my country and you need to accept that many other African Americans and others support this president because of his policies. And to insult me to say am I getting paid, that is disgraceful. That’s representative of MSNBC and their narrative to keep Blacks silent who happen to support this president,”

I went on MSNBC and they accused me of being a sell-out.

The Left is so racist that they think the only way a black man will think for himself is he’s paid? I’m tired of the bigotry. @realDonaldTrump – I’ve got your back! pic.twitter.com/MbftgawuLV

Accuses Melvin of Getting Paid

In what we would consider the best retort to Melvin’s accusation, Jones accuses the MSNBC host of getting paid himself.

“Why can’t I be like White liberals or other Whites, nobody questions if they’re getting paid, so do you ask Democrats, are they getting paid?” he charged. “Are you getting paid by Joe Biden?”

Well, we all know MSNBC doesn’t need to get paid to serve as an outlet for Biden and the DNC. That’s their entire modus operandi.

Just left the Oval Office from meeting with @realDonaldTrump and @VP.

Jones met with President Trump in the Oval Office earlier this week and emerged “happy and proud” knowing that his administration is working “extremely hard to make sure America is going to be healthy again.”

Joe Biden, by contrast, isn’t going to make things better, according to the Democrat.

Representative Jones appeared on Fox & Friends the next day and said that Black people who “attempt to come off of the plantation,” which is a phrase connoting those straying away from the Democratic Party to conservatism, are called a “sellout and shamed” as if they were being paid to do so…It’s just outrageous. It’s just crazy. It just shows the bigotry throughout the liberal media and the Democratic Party.”