20 Years After Socialist Takeover, 1 In 3 Venezuelans Are Starving 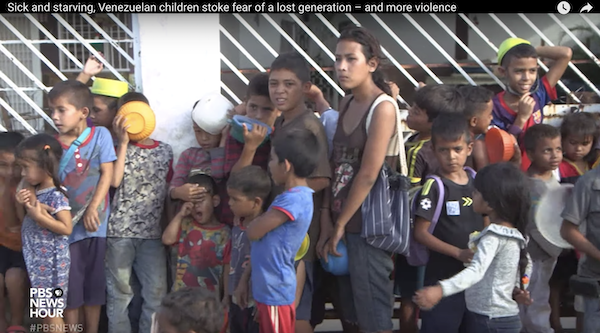 One of every three people in Venezuela is fighting to put enough food on the table, according to a study published Sunday by the U.N. World Food Program. Venezuelans are starving

The assessment found that 9.3 million people are “food insecure.” Seventy percent of Venezuelans said that while food is available, they cannot afford it.

In 1998, a career military officer was elected president of the wealthiest country in Latin America on a platform of socialism. It was an election victory that shocked the world, as many believed that the catastrophic failure of the Soviet Union had closed the book on socialism as a form of government.

“Western liberal democracy had emerged, as what he called, the final form of human government,” continued Baier, “But did the collapse of communism really mean the end of socialism?”

Today, Hugo Chavez is gone, but his socialist “Bolivarian Revolution” drags on, trapping oil-rich Venezuela in an escalating state of crisis.

From 2007 to 2010, the Chavez regime seized majority control of four massive oil projects and American-owned oil rigs, and implemented a new tax on oil production, among other measures.

“Chavez won four national elections in a row,” said Baier in the Fox Nation piece, “But when oil prices fell, the flaws of what was now called Chavismo were starkly revealed.” More

Venezuela was the wealthiest country in South America, and Venezuelans chose their socialist rulers. Let’s not make the same mistake in our nation.

1 in 3 Venezuelans is starving.

THIS IS AN AUGURY OF BERNIE SANDERS’ AMERICA!

This is what @BernieSanders has in store for us.

American Liberals haughtily say, “That won’t happen here” and push for the same kind of transition here. How many examples of failed socialism do we need to have before they will realize that socialism and America were never meant to be?