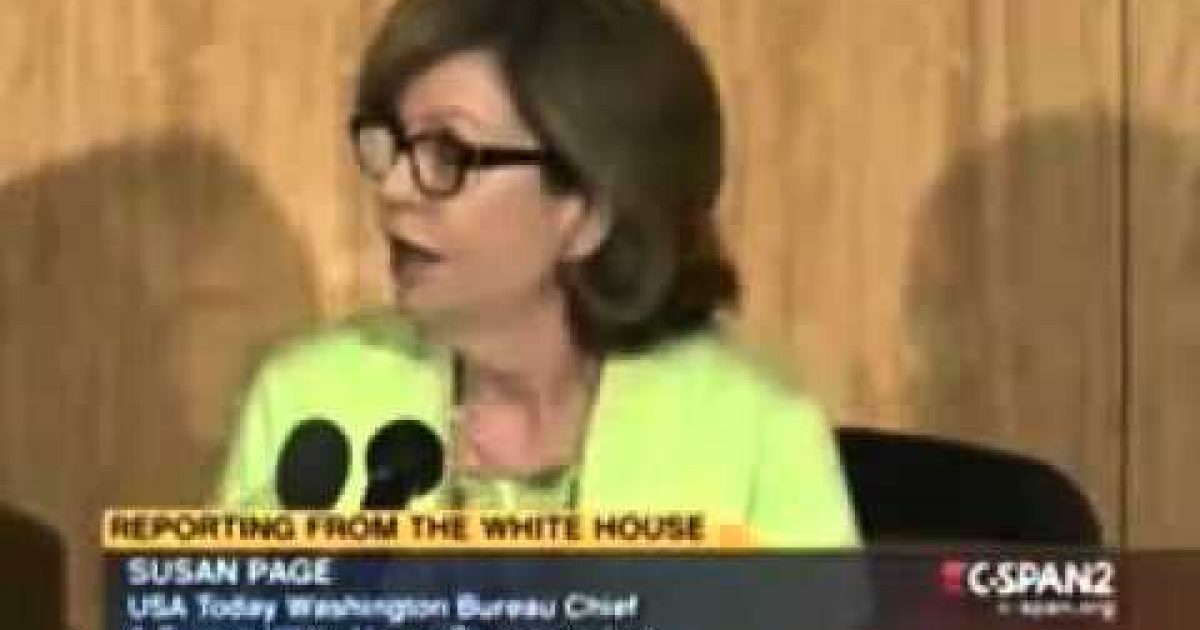 Facebook Twitter Flipboard
Unnoticed
in this environment where most of the mainstream media has their heads
up the collective arses of the White House are the contrary voices still
liberal but complaining that the Obama administration is least
transparent, and most unfriendly to the press than any administration
they have ever covered.  AP Washington Bureau Chief Sally Buzbee
recently presented eight specific examples
of how the Obama administration blocks information to the
public via the press warning, “The fight for access to public
information has never been harder.”​ Similar comments have come from
New York Times executive editor Jill Abramson, who said, “It is the
most secretive White House that I have ever been involved in covering,
and of course Sharyl Attkisson whose new book reveals
this administration not only bugged her computer but planted evidence
on it so they could arrest her or one of her sources at a later date.
Eric Wemple of the “Washington Post”
is reporting that This past Saturday “USA Today” Washington Bureau
Chief Susan Page added her name to the list of press malcontents.
Speaking at a White House Correspondents’ Association (WHCA) seminar,
Page called the Obama White House not only “more restrictive” but also
“more dangerous” to the press than any other in history, a clear
reference to the Obama administration’s leak investigations and its
naming of Fox News’s James Rosen as a possible “co-conspirator” in a
violation of the Espionage Act.

The
WHCA convened the event both to strategize over how to open up the
byways of the self-proclaimed most transparent administration in
history, as well as to compare war stories on the many ways in which it
is not. Peter Baker, the veteran Washington reporter from the New York
Times, provided perhaps the best instance of White House-administered
madness. In covering a breaking story recently, Baker received a note
from a White House handler indicating that President Obama had been
briefed on the matter in question.

That information came to Baker “on background.” The gist: Not from me — a meeting has occurred..

Other
gripes: Correspondents took aim at large-scale “deep background”
briefings — attended by up to 40-odd reporters — at which ground rules
specify no names for the officials in attendance and no quotations of
anything they say. ABC News Chief White House Correspondent Jonathan
Karl spoke of covering the Boston Marathon bombings. As the story
developed, Karl noted that the White House wasn’t giving out any
information at all. So he went around it and found out that the feds
were sending their high-value interrogation team to Boston. “No way I
would have gotten that out of the White House,” said Karl.

Bloomberg
White House correspondent Margaret Talev noted how the White House
stopped giving details on the fine wines served at state dinners, an
opaque measure that she exposed in this story. In pursuing the piece,
said Talev, she got the runaround from White House press officials,
making her “so mad at them.” Over the course of a few weeks, she had to
become, in essence, a wine correspondent.

On Friday,
the day before the conference, President Obama had invited Nina Pham,
the Texas nurse who had just completed her recovery from Ebola at the
National Institutes of Health to the White House.  Prior to the meeting
with Ms Pham the White House announced that still photographers would be
allowed to document the proceedings. But print reporters and TV cameras
would not be allowed. At the White House Daily briefing with Josh
Earnest, ABC’s Jonathan Karl asked why. Earnest responded that “many of
you did have the opportunity to see [Pham] deliver remarks at the NIH
upon her departure from the hospital.”

Karl: “That’s not answering the question. Why was this decision made?”

Earnest:
“Because reporters did have the opportunity to see her speak already.”
Also, the press secretary said that neither President Obama nor Pham
planned on making any comments at the event. Taken together, those
explanations amount to a lump of nothing.

Talev
said Saturday that it was “ridiculous” the White House didn’t provide
full media access to the Pham-Obama meeting. In a Friday afternoon chat
with the Erik Wemple Blog, recently retired ABC News White House
correspondent Ann Compton struggled to fathom the rationale for
restricting access, given that the White House has been aggressive in
sending the message that it’s fighting Ebola: “She’s been in government
medical care for the last how many days?” notes Compton. “And she walks
out unexpectedly looking terrific — why wouldn’t you want the world to
see that the U.S. is doing what the White House has said? So today makes
no sense to me.”

Of course it should makes sense to Ann Compton.  This is
the administration that once had a meeting on transparency, and barred
the press from attending.

Most interesting is the fact that many of the reporters complaining about the White House’s treatment of the press ignore or misreport stories that could be damaging to the President or his Party.

As Big Daddy says in “Cat on a Hot Tin Roof,”  There ain’t nothin’ more powerful than the odor of mendacity!