US Launches 59 Tomahawk Missiles on Syrian Airbase, It’s For The Kids Trump Says 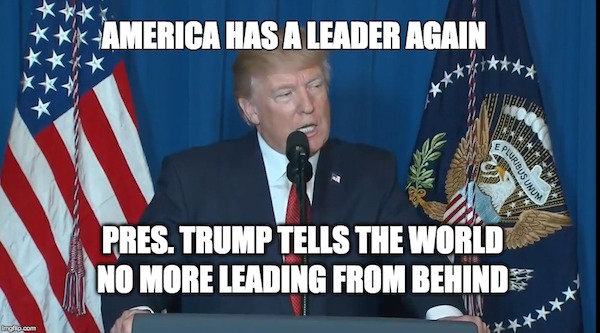 No Child of God should ever suffer such horror. President Trump 4/6/17

At approximately 8:45 pm EDT the US Navy sent 59 tomahawk missiles toward the Syrian Airbase near Homs, targeting the airfield’s hangers, aircraft, runways, and fuel storage areas. Each tomahawk carries a warhead with 1,000 pounds of conventional explosives so much of the Airbase that Syria used to launch its chemical weapons attacks must have been destroyed.

During his presidential campaign last year President Trump repeatedly criticized President Obama for his “line in the sand” against Syria —saying the empty threat to punish Syria for its use of chemical weapons made the US appear weak and gave Bashar Assad encouragement to continue to brutally attack their own citizens. Tonight suddenly and without warning the President hit the Syrian despot with a limited attack.

On Wednesday when talking about the attack standing next to the Jordanian Kink President Trump seemed genuinely moved at the carnage especially the dead and suffering children.   He mentioned the children again when he made a short statement after the U.S. Navy attack.

On Tuesday Syrian President Bashar al Assad launched a horrible chemical attack on innocent civilians using a deadly nerve agent. Assad choked out the lives of helpless men, women and children. It was a slow and brutal death for so many. Even beautiful babies were cruelly murdered at this very barbaric attack. No child of God should ever suffer such horror. Tonight I ordered a targeted military strike on the airfield in Syria from where the chemical attack was launched. It is in this vital national security interest of the Untied States to prevent and deter the spread and use of deadly chemical weapons. There can be no dispute that Syria used banned chemical weapons, violated its obligations under the Chemical Weapons Convention and ignored the urging of the UN Security Council. Numerous previous attempts at changing Assad’s behavior have all found and failed very dramatically. As a result, the refugee crisis continues to deepen and the region continues to destabilize, threatening the United States and its allies. Tonight I call on all civilized nations to join us in seeking to end the slaughter and bloodshed in Syrian and also to end terrorism of all kinds and all types. We asked for God’s wisdom as we face the challenge of our very troubled world. We pray for the lives of the wounded and for the souls of those who passed. And we hope as long as America stands for justice and peace and harmony will in the end prevail. Good night and God Bless America and the entire world.

Trump has taken more action against despot Bashar al-Assad in his first 77 days in office than Barack Obama took in  eight years in office.And the action taken by Trump was not an overreaction. It was a limited attack designed to show Assad that he meant business. It was launched in the middle of the night to prevent casualties and the Russians who have troops in Syria were warned in advance.

Along with the message to Assad, with the attack President Trump showed Putin, The North Koreans, and Chinese that there is no more leading from behind… America is back. We have a strong decisive leader who will act quickly to protect American interest across the world.

President Trump’s emotional statement is below: